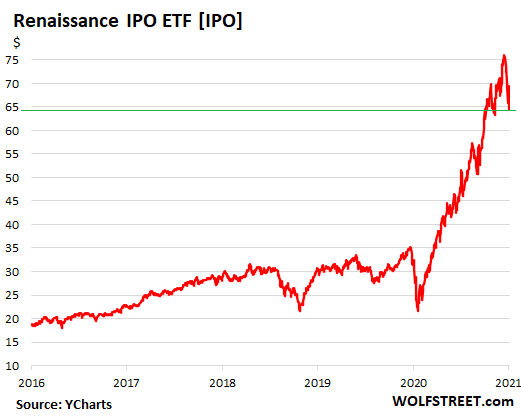 The ETF tracks the Renaissance IPO index, which reflects the top 80% of companies by capitalization that went public over the past two years. After two years, the stocks are removed from the index. The index caps a company’s weight in the index at 10%. The top five holdings, accounting for 34% of the total index, are currently (weight in parentheses):

The chart below shows both the IPO ETF and the S&P 500 Index as percentage change from March 2016. For the first four of those five years, the IPO index outperformed the S&P 500 during the Good Times and fell more sharply during the sell-offs, to end up on par with the S&P 500, which makes sense, given the precarious and speculative nature of IPO stocks.

What the chart also shows is that the big sell-offs in the S&P 500 in late 2018 and in February-March 2020 were accompanied by plunges in the IPO ETF, which dropped hard in the early stages of the selloff, foreshadowing in a way the drops of the S&P 500 (data via Ycharts): 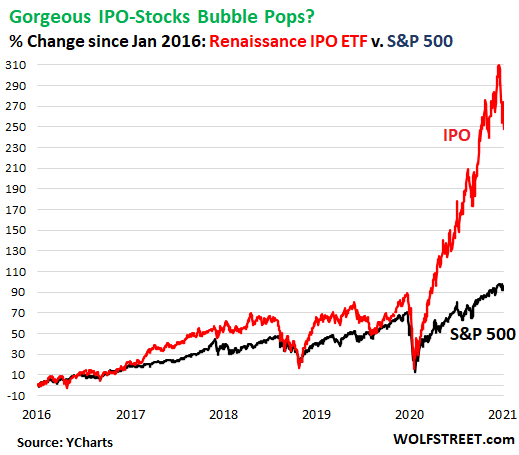 Another example of this 1999-style exuberance popping in plain sight is the ARK Innovation ETF [ARKK], which dropped 6.3% on Wednesday and is down 20.1% since February 12.

The components of ARKK are companies that ARK identified as offering ‘‘disruptive innovation’’ that “potentially changes the way the world works.” The top five world-changers in the ETF, accounting for 30.5% of the total ETF, are: 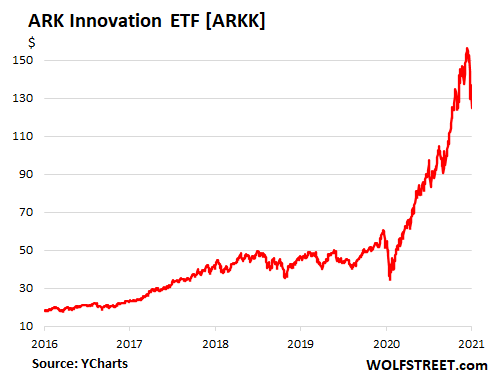 When funds that track the most world-changing disruptor highfliers that had skyrocketed over the past 11 months by several hundred percent suddenly swoon, it shows that there is a change in sentiment. People are suddenly eager to sell those stocks, while others are more reluctant to buy them at current prices, and for sellers to be able to sell, prices have to drop further to bring out the buyers. It’s a sign that blind and crazy exuberance is becoming a tad less exuberant.

But the whole market has been powered by blind crazy exuberance, with market participants engaging in huge and highly leveraged risks. So when blind and crazy exuberance becomes less exuberant, the very foundation of the entire market begins to wobble.

147 comments for “Was That the IPO Stocks Bubble that Just Popped?”