Is this spread heading to what happened in the 1970s and 1980s when the Fed battled blow-out inflation?

The US Treasury 10-year yield has shot up since the Fed made its infamous “pivot” in the fall of 2021, from willfully ignoring and assiduously brushing off the incredibly spiking inflation to actually acknowledging, even if tepidly at first, its existence and persistence. 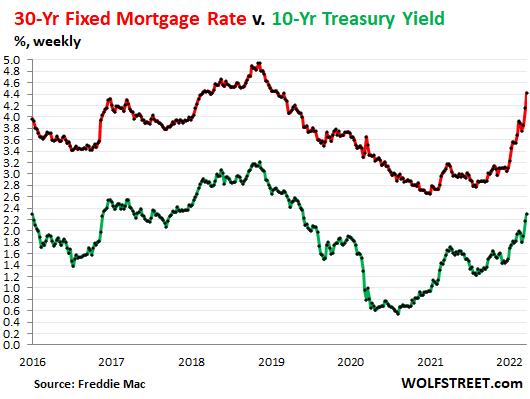 The chart above shows what happened during the March 2020 chaos, when the Fed cut its policy rates to near 0% and announced a huge QE program which caused the 10-year Treasury yield (green line) to plunge, while mortgage rates just continued their methodical decline that lasted through December 2020.

That decline in mortgage rates was kicked off in late November 2018, when Powell, getting hammered on a daily basis by Trump, caved and communicated that the Fed would soon stop tightening.

At the time, inflation was below the Fed’s target, and the Fed was hiking rates that were already above CPI and it was reducing its balance sheet at a rate of about $50 billion a month (QT). Housing was getting hit, and stocks were tanking, and Trump, who’d taken ownership of the Dow, had had it.

The fact that the 10-year yield plunged in March 2020 while mortgage rates were only slowly declining caused the spread between the two to blow out. It maxed out at the end of April at 2.73 percentage points.

The average 30-year fixed mortgage rate continued to drop until it hit a historic low in December 2020 of 2.66%.

But the 10-year Treasury yield had started rising four months before mortgage rates started rising, bouncing off its historic low of 0.55% in August, causing the spread between the two to narrow. By December 2020, when mortgage rates had hit their low point, the 10-year Treasury yield had risen to 0.9%. And the spread continued to narrow into 2021. 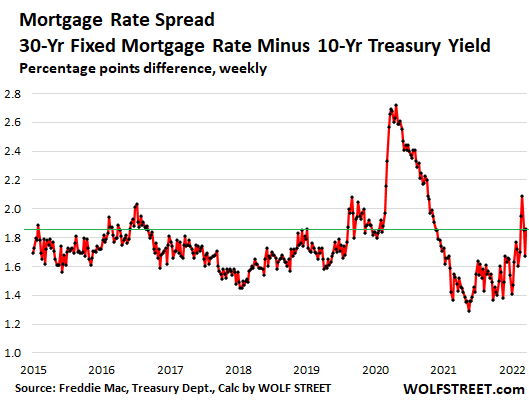 Long-term patterns show just how much the spread can widen. The massive widening in March 2020 and during the Financial Crisis occurred because the Fed aggressively pushed down Treasury yields while mortgage rates lagged. 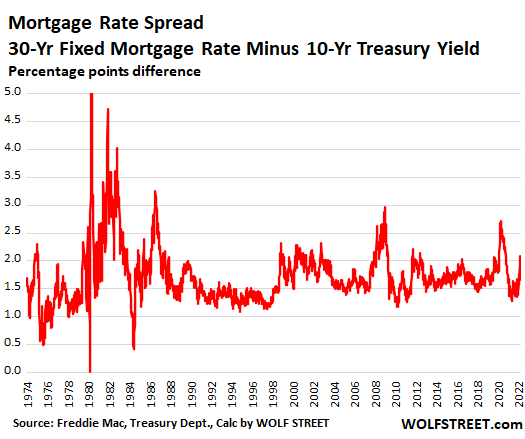 231 comments for “Mortgage Rates Are Rising Much Faster than Treasury Yields. What’s the Deal?”