The most-hyped stocks are collapsing, some by 90%, such as EV SPACs, as the sordid underbelly of the stock market comes systematically unglued.

But that’s on the mild side of the spectrum (stock data via YCharts): 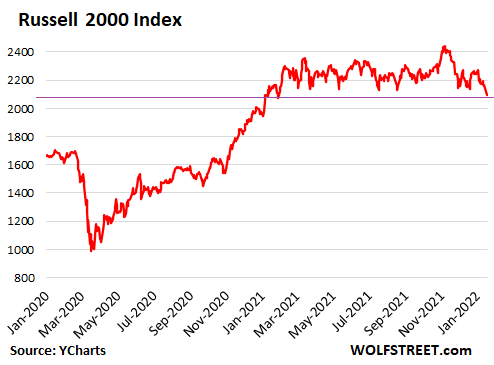 This is another aspect of how the stock market has been falling apart beneath the surface, in line with the wholesale collapse of IPO stocks, SPACs, and trackers of the most-hyped stocks, such as the ARK Innovation ETF.

The Renaissance IPO index [IPO], which tracks stocks that went public over the past couple of years, after a blistering spike that started in March 2020 and ended in February 12, 2021, has now plunged by 37.7% from that high, to the lowest level since September 11, 2020, with lots of air remaining below it (stock data via YCharts): 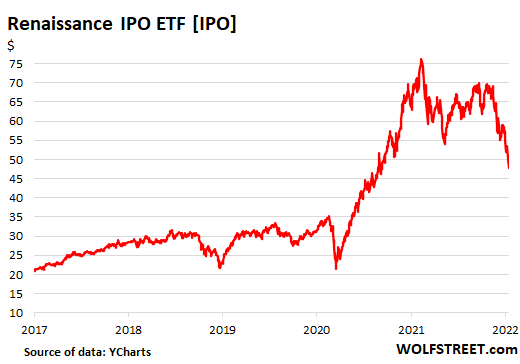 The top components Renaissance IPO index and their collapse in percent from their highs:

Among the notable IPO stocks beyond the top 10 of the Renaissance IPO Index, with the collapse in percent from their highs:

And some notable housing-related companies, and the collapse in percent from their highs:

And our space SPAC:

Our glorious EV SPACs have gotten wiped out wholesale. Here are some of the most prominent ones:

Fake-meat producer Beyond Meat, which IPOed in April 2019, today landed below its first-day close:

Some of these winners are tracked by the ARK Innovation ETF [ARKK], which attempts to track “disruptive innovation,” which it defines as a “technologically enabled new product or service that potentially changes the way the world works” or at least it changed the way people’s money got disappeared: 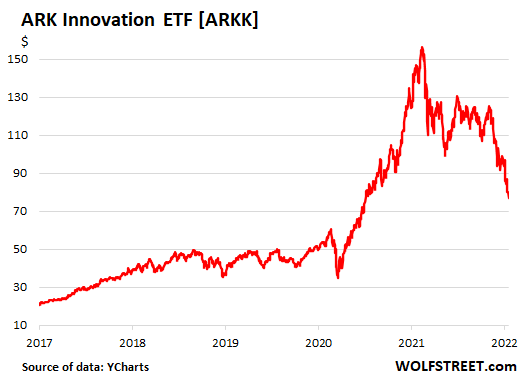