The Bureau of Labor Statistics is finally going to change the component of the Consumer Price Index for New Vehicles that has vexed me since Adam and Eve. It’s going to change it in two big ways: The way it collects the data, and the way it figures the CPI for new vehicles. The BLS announced the final changes in March last year. The new version will be included in the CPI for April 2022, to be released in May. The data for the new version, going back to December 2007, is going to blow your doors off in a moment.

The BLS is going to switch to transaction-based prices for new vehicles. It purchases the data from J.D. Power. I have been producing charts with J.D. Power’s Average Transaction Prices for a while. The BLS will abandon the old survey-based method of asking dealers about the prices of hypothetical vehicle configuration. It will also make changes in the way it calculates the CPI for new vehicles.

The coming version of the CPI new vehicles spiked by 15.9% in December from a year earlier (red line), compared to the current version’s 11.8%, which had already been the biggest spike since 1975 (purple line). 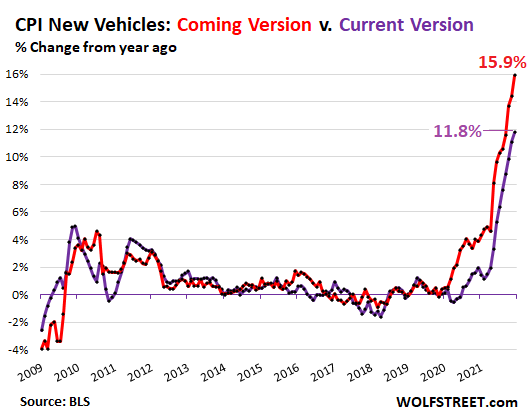 Whatever higher or lower CPI this new version might produce in the future, it picked up on the current price spikes much more than the classic survey-based method.

But from the index in its cumulative form, with both the classic CPI-NV and the R CPI-U-NV indexes set at 100 for December 2007, we can see that the new version doesn’t always produce higher CPI readings, and in fact produced lower readings some of the time. But it sure picked up on the current price spikes: 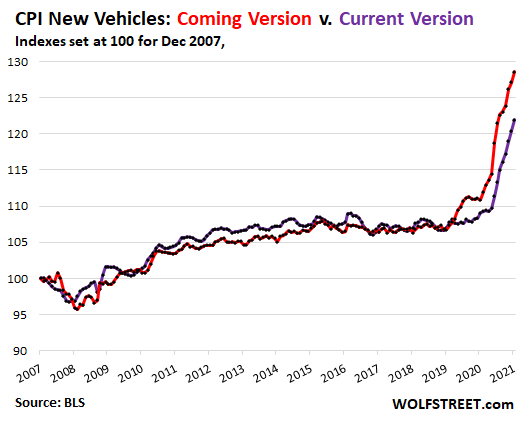 The “R CPI-U-NV” is the first CPI component based on real transaction data, rather than surveys. As such, how calculations are done changes too. And that gets too deeply into the weeds for us real people here (but if you’re into recreational juggling of CPI-math, you can check out the changes at the BLS).

The classic CPI for new vehicles has long been one of my pet peeves for a variety of reasons – including the aggressive “hedonic quality adjustments” that the BLS uses to turn sharp price increases of actual vehicles into price decreases for CPI purposes.

But there is no escape from the “hedonic quality adjustments”: they will also be applied to the new R CPI-U-NV.

I know there are lots of people who think that their own 1990 model was the best vehicle ever built and it still runs great, and they’ll never sell it. But today’s trucks have a 10-speed automatic transmission, compared to the four-speed at the time, they have a gazillion airbags, disk brakes on all wheels, a back-up camera, Hill Start Assist, a fancy-schmancy infotainment system that couldn’t even be imagined in 1990; they’re bigger and more powerful and more economical, and have myriad other “improvements.”

Whether you want them or not, these improvements have a cost, and they change the vehicle. But the CPI tracks how much it costs to buy the same product over time. And when improvements are added, the estimated costs of the improvements are removed from the CPI calculation. And this will continue with the new version of the CPI.

This disconnect between the soaring prices paid by real people and the CPI for new vehicles, which had long periods of declines, even as actual vehicle prices surged, incited me a few years ago to come up with my own annual price index for new vehicles.

The WOLF STREET F-150 XLT and Camry LE Price Index tracks the MSRPs of the bestselling truck, the F-150 XLT, and the bestselling car, the Camry LE, going back to 1990, and compares the prices to the CPI for new vehicles. The whole operation was upended, however, when people suddenly started paying $2,000 or even $10,000 over MSRP last year, the craziest situation I’ve ever seen. My index didn’t pick up those addendum prices, but even the classic CPI for new vehicles picked some of them up: 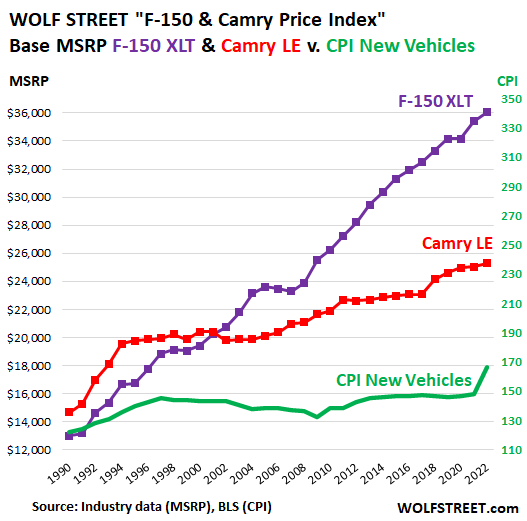 92 comments for “The New Version of CPI for New Vehicles Will Blow Your Doors Off: Spikes Even More. WHOOSH!”