What you’re looking at here is the infamous WOLF STREET “F-150 & Camry Price Index,” which tracks the Manufacturer’s Suggested Retail Price (MSRP) of the best-selling truck and of the best-selling car over the decades, and compares those prices to the government’s inflation index for new vehicles. 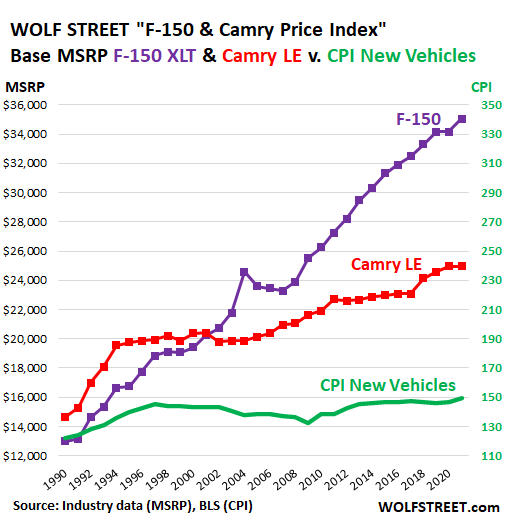 Depending on market conditions, there are usually discounts and incentives and rebates, and practically no one pays MSRP, but this has nearly always been the case, and so it doesn’t change the trend. The exception was/is during 2021 vehicle shortage when some vehicles sold over sticker.

A big part of the difference between actual price increases in dollars and the CPI for new vehicles is a device called “hedonic quality adjustments.” The Bureau of Labor Statistics has applied them with increasing aggressiveness since the 1990s, as you can see in the chart above.

This process has suppressed the CPI for new vehicles over the past 25 years, even as actual prices in dollars of new vehicles have soared.

People are having to pay the actual prices in dollars – in their devalued dollars – and those prices have moved out of reach for many Americans, who’re now locked out of the new vehicle market, and can only buy used vehicles.