Potential homebuyers and speculators in Canada are now looking at rising interest rates coming their way, which is a dreadful sight with house prices at these ridiculous levels in the big markets.

As is typically the case early in rate-hike cycles, there is now a mad scramble underway to buy a house now, no matter what the price, in order to lock in the still very low mortgage rates, as prices have risen so far in recent years that even moderately higher mortgage rates move those payments out of reach.

But that mad scramble isn’t taking place in all markets. In three of Canada’s 11 largest markets – in Ottawa, Winnipeg, and Edmonton – home prices fell in December. But in the already hottest markets home prices re-surged, after having “paused” for several months.

Interest rates are already rising – but are still ridiculously low, and far below the red-hot inflation rate. The one-year yield of Canada Treasury securities has quadrupled since September 2021, to 1.05%. The 10-year Canada Treasury yield has jumped to 1.87% this morning, the highest since February 2019.

Most mortgages in Canada either have variable rates, or have fixed rates for terms typically ranging from 1-10 years. And those rates have started to rise too, but just barely.

The Bank of Canada is so far behind the curve it can’t even see the curve, but it is expected to finally finally finally raise its policy rates next week for the first time in this cycle. It ended QE last year, after wagging its finger at the excesses in the housing market that resulted from its reckless QE and interest rate repression. The BoC’s total assets have been flat since October, and at just under C$500 billion, are down 13% from the peak in March 2021: 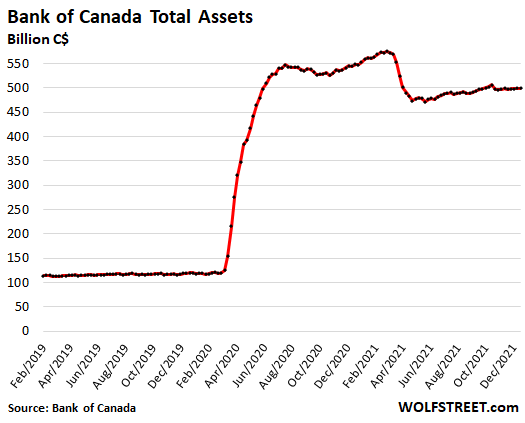 Mad scramble to lock in mortgage rates before they rise further.

In Greater Vancouver, house prices rose 1.0% in December from November, after having been flat for three months, according to the Teranet-National Bank House Price Index, released today. Year-over-year, prices jumped 14.2%, down from the 17%-range last summer.

Vancouver’s housing market had been on a decline that started in August 2018, when the BoC’s reckless monetary policies came to the rescue to refuel the spike: 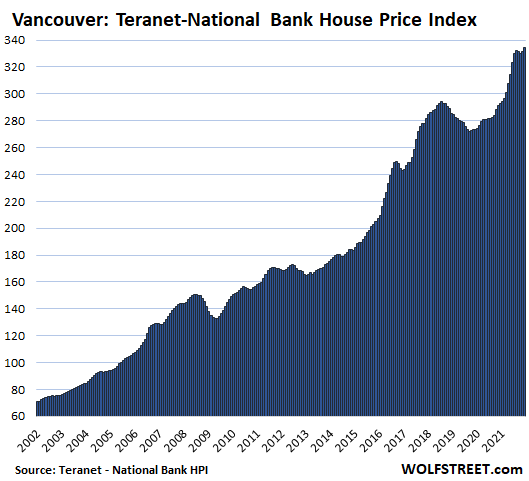 The Teranet-National Bank House Price Index is based on the “sales pairs” method. Much like the Case-Shiller Home Price Index in the US, it is a three-month moving average and compares the price of a house that sold in the current month to the price of the same house when it sold previously. In other words, it tracks how many Canadian dollars it takes to buy the same house over time, which makes it a measure of house price inflation.

The charts here are all on the same scale, and markets with less house price inflation over the past two decades have more white space above the curve.

In the Greater Toronto Area, home prices rose 0.9% in December from November, and by 16.8% year-over-year: 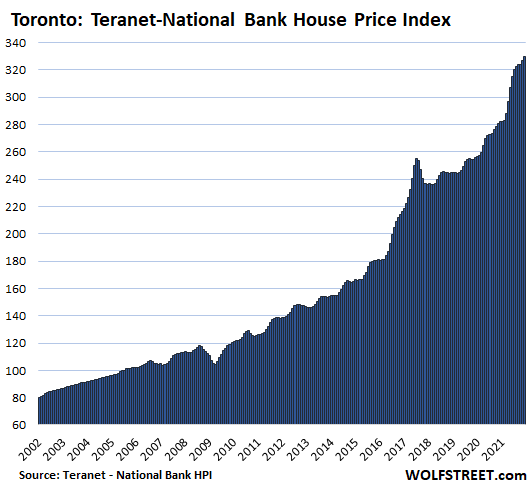 In Hamilton, Ontario, house prices jumped by 1.2% in December from November – a crazy increase but down from the even crazier increases in mid-2021 that reached 3.8% in June. Year-over-year, the index jumped by 25.4%, but that was down from the 30% spikes in July and August. Thank you, halleluiah, for the miracles of the Bank of Canada’s money-printing machine: 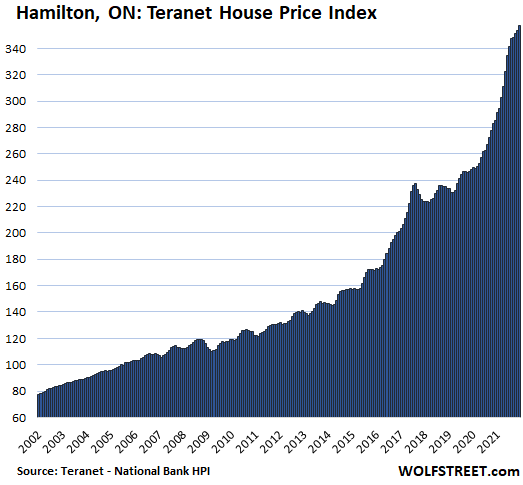 In Victoria, house prices spiked by 2.1% for the month, and by 19.7% year-over-year. From 2018 through June 2020, prices had flattened, but then the BoC started performing its miracles: 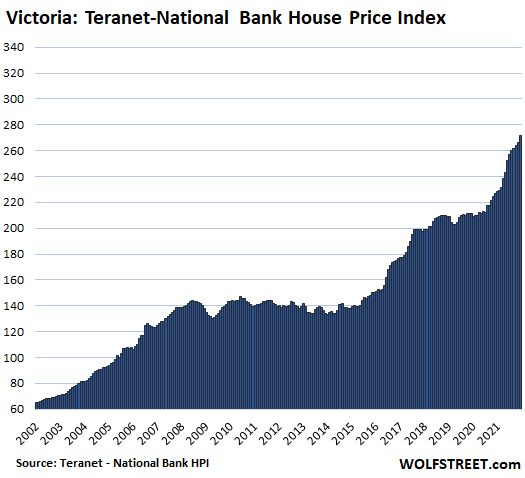 In Winnipeg, house prices declined for the month, after having been flat for two months in a row, which whittled down the year-over-year increase to 7.5%. Before the jump that started in late 2020, prices had remained about level for seven years, after the housing boom that petered out in 2013: 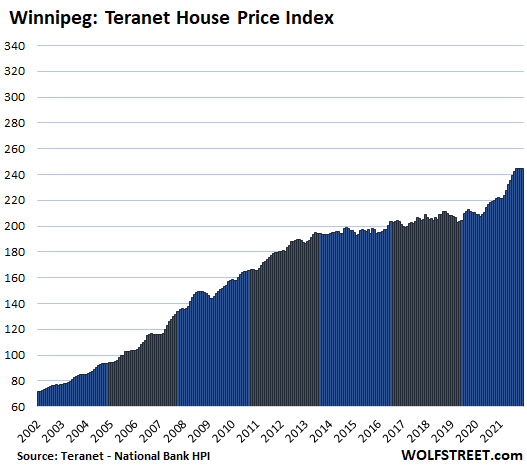 In Montreal, house prices jumped 1.1% for the month, after three months of staying put. Year-over-year, prices rose 15.6%, amid its lowest year-over-year gains all year that had maxed with a 21.6% gain in August: 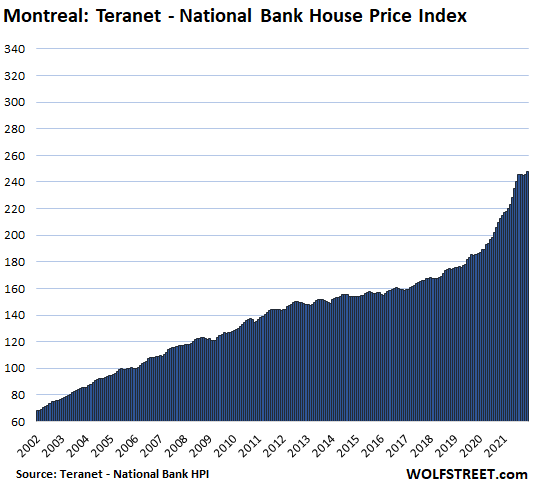 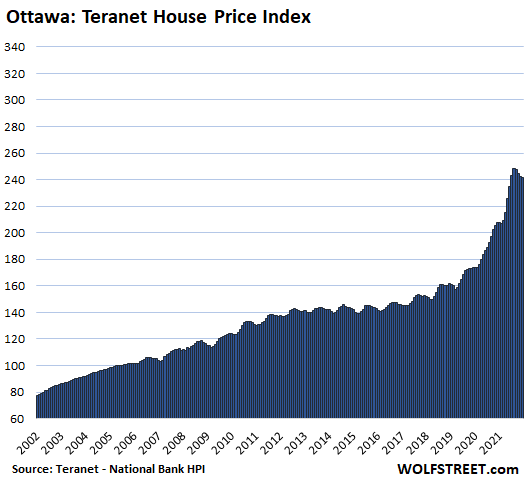 In Halifax, house prices spiked by 1.9% for the month, but that spike was just a shadow of the 5.4% idiocy spike in April. This pushed the year-over-year spike to 30.7%. A housing chart like this is just nuts: 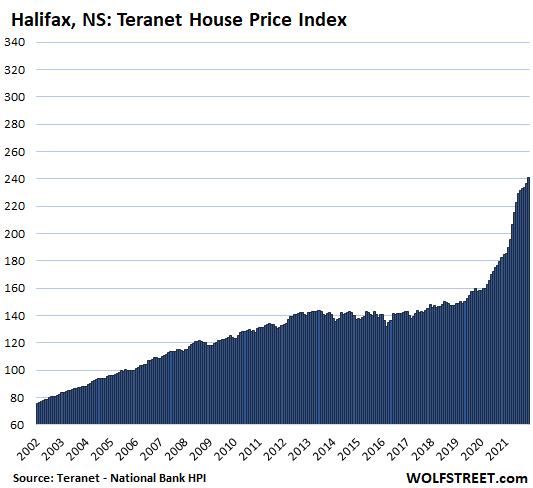 Calgary and Edmonton didn’t qualify for the most splendid housing bubbles in Canada because prices have gone nowhere since the end of the bubble in 2007, which is less than splendid. Canada’s oil towns had mind-boggling housing booms through 2007, powered by the endless money of their oil booms. But the money ended, and for the following 14 years, house prices went nowhere.

149 comments for “Most Splendid Housing Bubbles in Canada: Mad Scramble to Lock in Rising Mortgage Rates as Bank of Canada Is Set to Tighten”