The hype-and-hoopla era was just so much fun while it lasted.

Look, I have a BBQ grill made by one of the grill and griddle makers here, and some of the companies here have been around since dirt was young, and others are startups, and so they all rode up the lockdown boom, and now it turns out that the boom didn’t last. And that’s OK.

What’s not OK is that these companies, at the very end of the lockdown boom in the second half last year, when everyone already knew that this lockdown boom was ending, decided to go public at mega valuations amid huge hype-and-hoopla spread by Wall Street banks and their minions that all made a gazillion bucks on these deals.

What’s not OK is that these shares were sold to retail investors directly or indirectly and then, after a quick spurt, the shares collapsed as everyone knew they would, because by that time, countless stocks had already collapsed, following the infamous February 2021.

So here we go again.

Traeger Inc. [COOK], which makes wood-pellet-fired outdoor grills and sells wood pellets, reported earnings this evening. The original company was founded years ago and was sold to PE firms in 2014. In 2017, the company was “recapitalized” by a new majority control shareholder, AEA Investors in partnership with Ontario Teachers’ Pension Plan. The company, as it says now, “entered the BBQ category because it’s ripe for disruption, and our strategy is already working. We are winning with disruptive product, sales and marketing…”

Yup, disruptive. And so this evening, upon the earnings release, shares tanked another 18% to $7.20 a share in afterhours trading, down 78% from their high on August 9, 2021, and down 60% from the IPO price of $18 on July 29, 2021. This was one heck of a “disruption” for the folks that bought the Wall Street hype-and-hoopla, premediated by Wall Street. They knew what would come, a massive wealth transfer (data via YCharts): 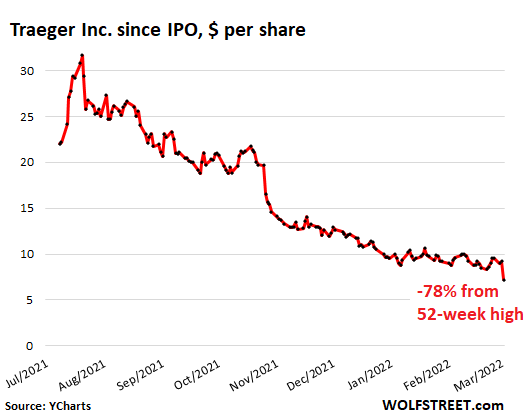 In its earnings release, the company guided for lower sales; “we are projecting lower than typical growth in 2022,” it said. And it mentioned “near-term headwinds,” and costs were going up everywhere in its operations, and its gross margin were getting squeezed.

The operating and cost issues aren’t the problem – all companies face this inflation nightmare. And companies that benefited from the lockdown boom, are now having to say goodbye to it. The problem is that the shares were sold with huge hype and hoopla at ridiculous valuations to unsuspecting retail investors that are now getting cleaned out. Hype-and-hoopla booms have that effect.

Other grill and griddle makers too.

Weber [WEBR], the grill maker that has been around since dirt was young and made money over the last three years before it went public, had its IPO right at the end of the lockdown boom, on August 5, 2021, at the IPO price of $14 a share. Shares then spiked 50% to $20.44 by August 10, and then the whole thing came unglued.

In 2021, it lost money, and it’s just a grill maker that has been making grills for decades, and the lockdown boom is over.

By mid-January, the stock price was down to about $10 a share, where it has been bouncing along ever since. In afterhours trading today, the stock fell to $10.65, down 48% from its high and down 24% from its IPO price (data via YCharts): 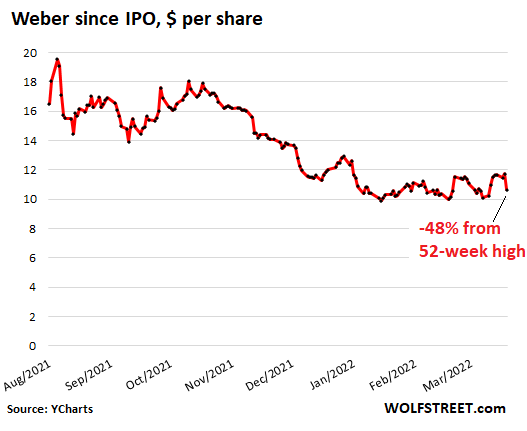 Solo Brands [DTC] – its Solo Stove brand of firepit cooking systems and grills makes up about 90% of its revenues, and three companies it hastily bought just before the IPO make up the other 10% – went public on October 28, 2021, at the IPO price of $17 a share. 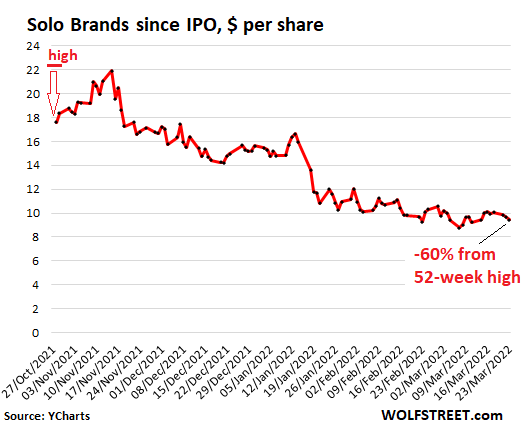 This isn’t over yet. Blackstone Products, which has been making BBQ griddles for over 15 years, announced on December 23, 2021, that it would merge with a SPAC and that the merger would likely close in Q2.

The SPAC minus Blackstone Products is currently trading under the ticker ACKIU. The merger, when completed, will make Blackstone Products a publicly traded company. Unlike companies that go public via classic IPOs, there are not a lot of hoops to jump through and not a lot of things to disclose, and pretty much anything flies. Many of the stocks of companies that went public via SPAC since 2020 have collapsed by 70%, 80% and 90%, and I have covered some of them, such as the EV SPACS and Grab, the biggest SPAC ever. So I’m eagerly looking forward to this latest SPAC miracle.