Four stocks collapsed by over 90% from highs. Others not far behind. SPAC-hype-boom leaves trail of SEC & DOJ investigations and class-action lawsuits.

The SPAC hype-boom that started taking off in 2020, along with a whole bunch of other ridiculous wealth-transfer schemes, has been imploding more broadly, not limited to EV SPACs. These Special Purpose Acquisition Companies raised tons of money, often involving celebrities that hyped this crap in the social media so that the dumbest retail investors would swallow it hook, line, and sinker. After the SPAC started trading publicly, they bought startups at huge valuations. The merger caused the start-up to be the publicly traded company. Insiders made a killing in this process no matter what happened.

This scheme of going public via SPAC dodges many of the disclosure requirements and other requirements that classic IPOs are subject to. Soon, a number of these companies were being investigated by the SEC and the Department of Justice.  And the fleecing of retail investors has been swift and spectacular.

All of the nine EV makers and EV-battery makers featured here are losing enormous amounts of money. All of them compete with the hugest companies out there: global auto, truck, and battery makers. The shares of four of them have collapsed by over 90% from their highs. The one that collapsed by the least was still down 60%. Some of them will likely go to $0.

These are not small amounts of dollars either. For example, Nikola, one of the minus-90%-ers, was once worth $34 billion. Now it’s worth $3.2 billion – over $30 billion gone up in smoke.

Nikola went public via merger with a SPAC. The deal was approved by shareholders in March 2020. The post-merger stock started trading in June 2020. In November 2020, the company disclosed that it and its founder Trevor Milton were being investigated by the SEC and the Department of Justice after a short-seller caught them lying to investors. The company did some housecleaning and swept out the founder. In December 2021, it settled the SEC investigation for $125 million.

Investors that bought into the hype have gotten massacred. On Friday, shares closed at $7.79, down 90% from the peak in June 2020 (all stock data via YCharts): 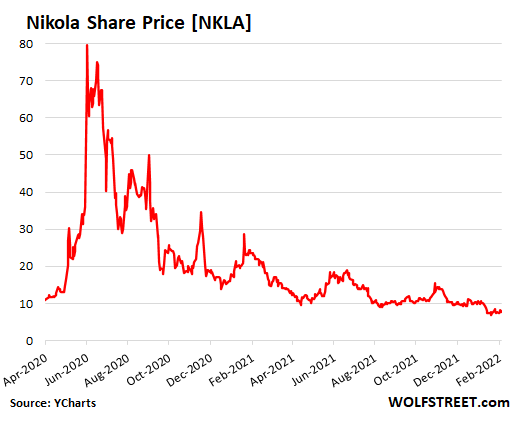 Lordstown Motors went public via merger with a SPAC, a deal that was announced in October 2020. In March 2021, the company disclosed that it was being investigated by the SEC. In July 2021, the company confirmed that now the Justice Department was investigating its business, its SPAC deal, and its reporting of vehicle pre-orders. The company threw out its CEO and CFO. 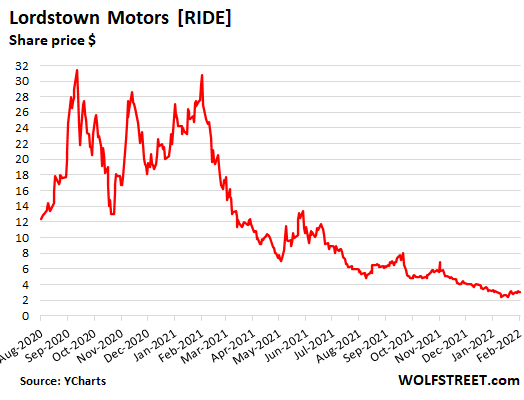 Romeo Power, which is developing batteries for EVs, announced in late 2020 that it would be acquired by the SPAC RGM Acquisitions. The deal was approved by shareholders in December 2020. The SPAC shares then started trading under the new ticker in January, 2021. The share price more than tripled from about $10 before the initial announcement to $34 a share on December 24, 2020, at the time of the approval of the merger by the SPAC’s shareholders. Then the collapse began amid investigations by class-action law firms of its announcement prior to the merger of ridiculous growth projections that have fallen apart. 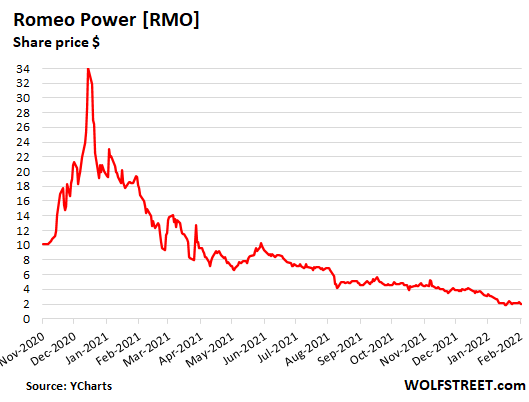 Workhorse went public via merger with a SPAC on October 22, 2020. Its shares shot up to nearly $43 on February 4, 2021, and then collapsed. In November 2021, the company confirmed that it was being investigated by the SEC and the Department of Justice for stock trading issues and accounting issues. On Friday, shares closed at $3.23, down 92% from the peak in February 2021: 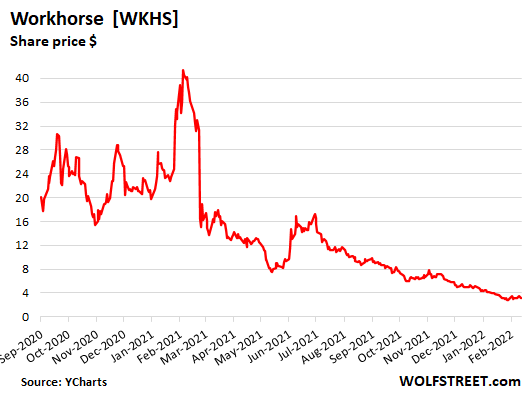 QuantumScape, which is trying to develop solid-state lithium metal batteries for EVs and counts among its investors Bill Gates and Volkswagen, went public via merger with a SPAC in November 2020. It is now tangled up in class-action lawsuits, alleging that the company lied about the potential of its batteries, including that the company may never be able to scale them for EV purposes. 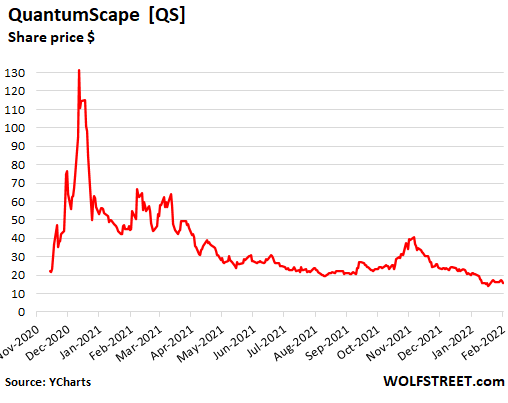 Faraday Future went public via acquisition by a SPAC and a private investment in public equity (PIPE) on July 22, 2021. Then short-seller allegations surfaced. In November, the company launched its own internal investigation about “inaccurate financial disclosures” and delayed the release of its Q3 earnings report. On February 1, 2022, the Committee released the results of its investigation. Among other things, it had found that the originally hyped report of over 14,000 reservations its vehicle was “potentially misleading” because “only several hundred of those reservations were paid, while the others (totaling 14,000) were unpaid indications of interest.” 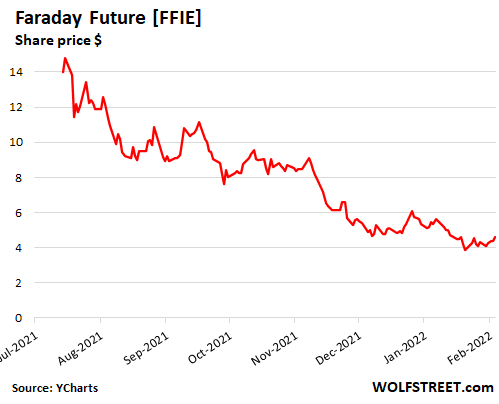 Canoo went public via merger with a SPAC on December 22, 2020. In May 2021, it disclosed that the SEC is investigating its merger deal with the SPAC and its “operations, business model, revenues, revenue strategy, customer agreements, earnings and other related topics, along with the recent departures of certain of the Company’s officers.” 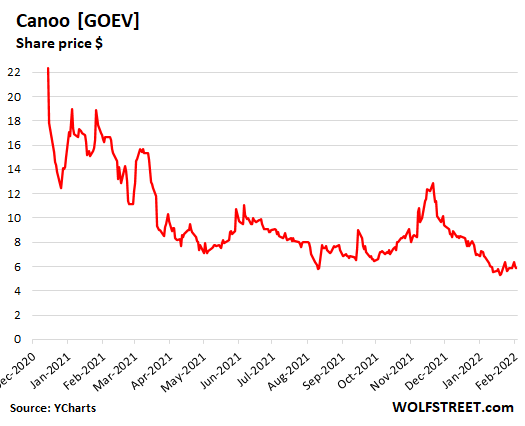 Ironically, Amazon and Ford booked huge gains in Q4 for their Rivian shares that they had purchased as early investors at much lower prices, and that for Q4 financial reporting purposes were valued at the end-of-quarter share price. For Ford, this worked out to be a paper gain on its Rivian shares of $9.1 billion.

Alas, those shares have now collapsed an additional 43%, to $58.85, and if they stay at this level through Q1, Ford faces a multi-billion-dollar write-down of its shares in Rivian. Similar for Amazon. Shares are down 67% from the peak three months ago and are well below the IPO price. 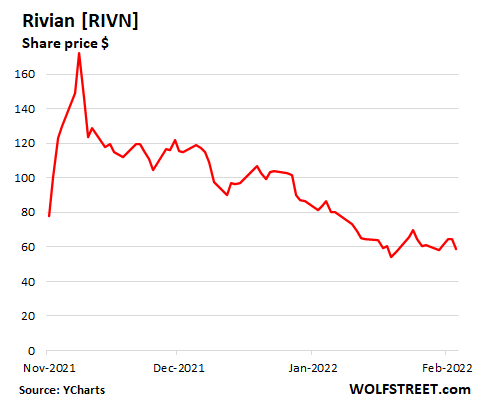 Lucid Motors went public via merger with a SPAC in July, 2021, raising $4.5 billion. On December 6, 2021, it disclosed that its SPAC deal along with “certain projections and statements” were being investigated by the SEC. Shares had been tanking for a week before the disclosure. On Friday, shares closed at $25.84, down 60% from the peak. A strange-looking chart of a double-hype-double-implosion in a short time: 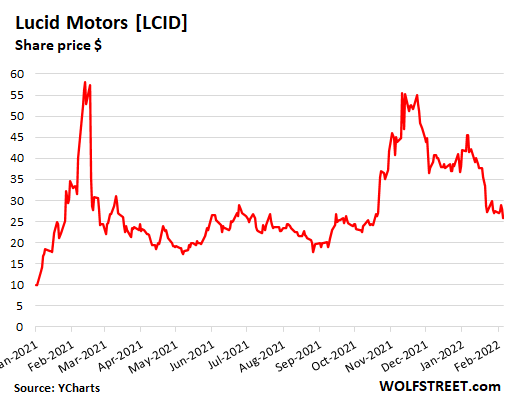 247 comments for “The Collapse of the EV SPACs: Retail Investors Got Fleeced Swiftly and Spectacularly”