I mean, who would have thought?

Turns out, there is a perplexing deterioration of on-time rent payments that started in mid-2019 and has continued through the end of 2021, interrupted only by the months when the big stimulus checks – not the little one – went out that allowed more households to make timely rent payments. 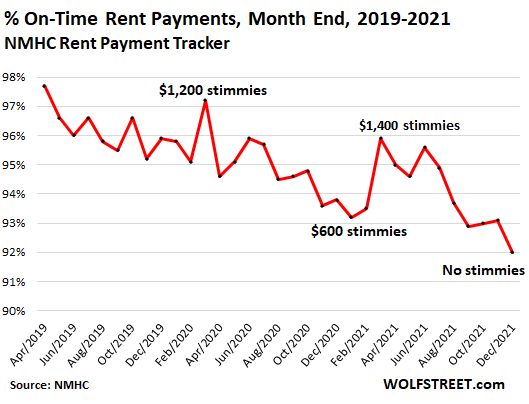 What stands out is the down-trend over those 33 months, interrupted by the months when the big stimulus checks poured into household coffers.

What also stands out is that the $600 stimmies that went out at the end of December 2020 and in January 2021 didn’t cut it, in terms of rents. They were likely used to deal with the credit-card hangover from holiday essentials.

Most of the eviction bans have now ended, but rent-and-landlord-support programs by various government entities to deal with the eviction bans, and the end of eviction bans, are still going on. This came on top of the now-ended flows of free money via extra unemployment benefits, PPP loans, stimulus checks, and other programs.

This data is based on actual rent collections from 11.8 million market-rate apartments in multifamily buildings (not single-family rentals) that are managed by corporate landlords. These apartments house about one quarter of the total 44 million renter households in the US.

“While the tracker is intended to serve as an indicator of resident financial challenges, it is also intended to track the recovery as well, including the effectiveness of government stimulus and subsidies,” the NMHC said. But the trend has been worsening.

Many of these apartments are in expensive urban centers, offer glitzy amenities, and cater to young people with good incomes and to empty-nesters with good incomes, following an apartment-tower construction boom in those areas. So tenants are not necessarily the down-trodden.

This rent collection trend comes amid a massive surge in market rents in many cities. Across the 100 largest markets in the US, in multifamily buildings – many of them managed by the very landlords in the above rent collection data – the median asking rent for one-bedroom apartments jumped by 12% year-over-year. In 34 cities, asking rents spiked by 15% to 28% year-over-year.

Those are massive increases. A 20% increase of a $2,000 rent payment means the household must come up with $400 per month more just to spend on rent.

Some of them are big expensive cities, such as Boston, Miami, Austin, and New York. Others are in smaller cities with much lower rents where renters now get raked over the coals.

The whole list of those cities and their rent increases are in my open letter to Powell: Dear Mr. Fed Chair Powell Sir, Rents Are Blowing Out and People are Hurting. The winner was Fresno, CA, where the media asking rent for 1-BR apartments spiked by 28% year-over-year, and by 41% in two years: 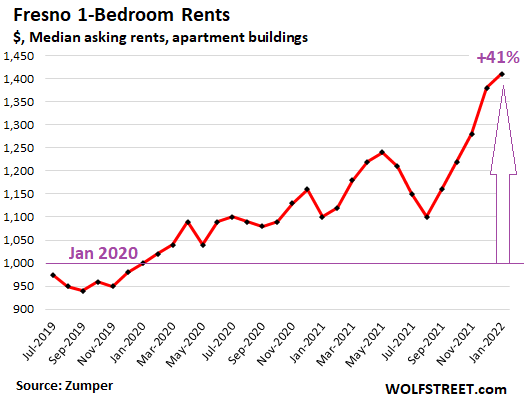 Could there be a relationship between these stunning rent increases and the deteriorating timeliness of rent payments across the universe of 11.8 million renters in apartment buildings?

Lacking data to prove it, my gut tells me that when rents are raised this sharply, and when rents already constitute a large part of the household budget, then there are going to be issues. These rent increases cannot just be brushed aside. Even in households where pay went up 6%, a 20% rent increase is a tough nut to crack. And a larger portion of tenants appear to be falling behind.