The probability of a 50 basis-point hike at the FOMC meeting on March 16 spiked to 90% this afternoon, based on CME 30-Day Fed Fund futures prices, after this morning’s hair-raising inflation data for January, and after St. Louis Fed President Bullard’s talk on Bloomberg. The spike in inflation is now infesting services and has spread deep and wide into the economy. A 50-basis-point hike would bring the Fed’s target range for the federal funds rate to range between .50% and 0.75% (Fed Rate Hike Monitor via Investing.com): 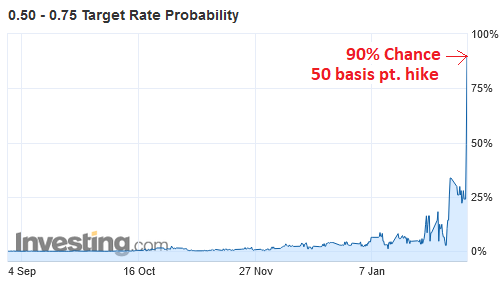 “There was a time when the Committee would have reacted to something like this [the hair-raising inflation report] with having a meeting right now and doing a 25 basis points right now,” said Bullard, formerly biggest dove in the house. “I think we should be nimble and considering that kind of thing,” he said.

“I don’t think this is shock-and-awe,” Bullard said about the 50-basis point hike, as markets are already pricing it in. “I think it’s a sensible response to a surprise inflationary shock that we got in 2021 that we did not expect,” he said.

In terms of quantitative tightening (QT), Bullard said that the Fed could essentially reduce its balance sheet at about the same pace that it had added to it, that pace having been $120 billion a month.

And this should include a “second phase” when the Fed sells bonds outright, rather than just letting them run off the balance sheet when they mature, he said.

“As a general principle, I see no reason why you can’t remove accommodation just as fast as you added accommodation, especially in an environment where you have the highest inflation in 40 years,” Bullard said.

And all heck broke loose in Treasury yields.

The two-year Treasury yield spiked by 25 basis points to 1.61% at the close, the biggest one-day leap since June 5, 2009 during the freak moments of the Financial Crisis. Now it’s not a crisis. Now it’s just the bond market, which had been in total denial until November, coming to grips with inflation and the Fed’s efforts to crack down on inflation. Jawboning by the Fed is finally working, at least a little bit: 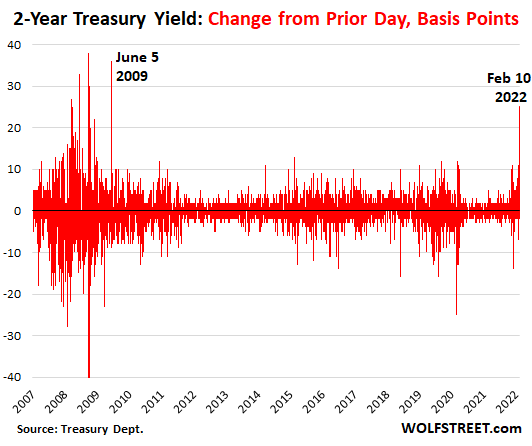 With this 25 basis-point spike, the two-year yield reached 1.61%, the highest close since December 24, 2019. In real terms, adjusted for CPI inflation, the two-year yield is still hugely negative, at -5.89%. So despite the spike, it is still a terribly mispriced bond given the huge amount of inflation: 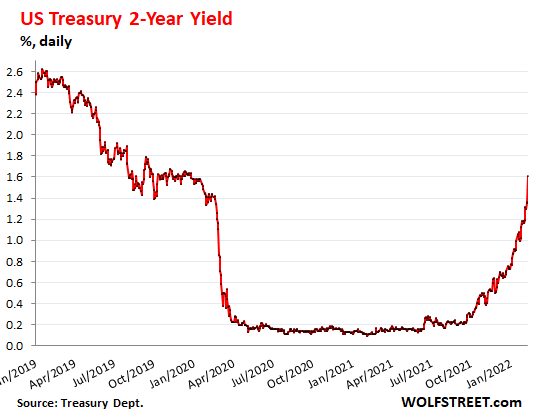 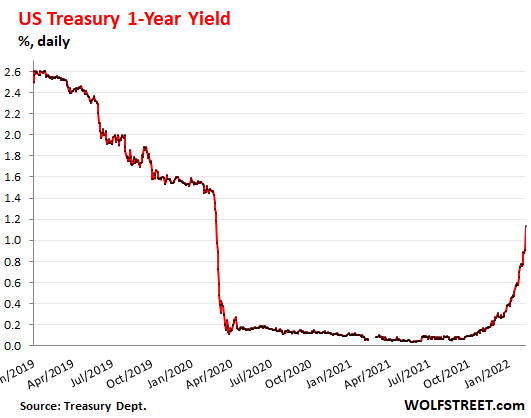 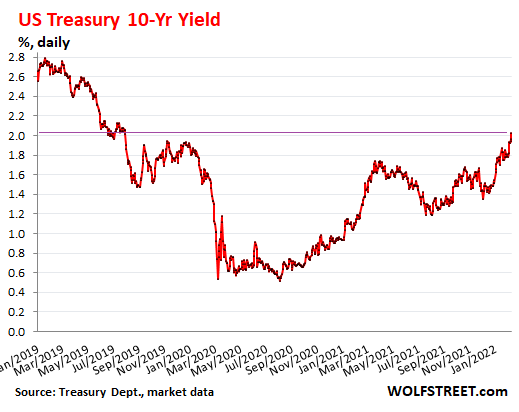 The average of the 30-year fixed mortgage rates quoted today spiked to 4.02% in the top tier scenario, above 4% for the first time since May 2019, according to daily data from Mortgage News Daily, with lenders quoting between 3.625% and 4.375% at the top tier. 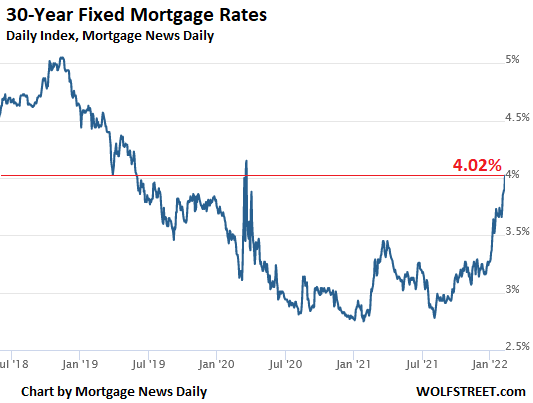 The most reckless Fed ever.

The Fed has compounded policy error with policy error ever since March 2020, with its interest rate repression and massive QE that it maintains even today, despite 7.5% inflation. Anything it would do to tighten going forward would just be feeble efforts that are too little and too late, to mitigate the effects of 22 months of massive policy error after policy error.

So now the Fed has created this crazy situation where the interest rate that the Fed is repressing with its policy rates, the effective federal funds rate (EFFR), is a near-zero (0.08%), while CPI inflation is 7.5%, producing the widest spread between the two going to 1955.

Back in the high-inflation periods in the 1970s and early 1980s, the EFFR was nearly always higher than CPI inflation and in some periods much higher. In fact, until the Financial Crisis, the EFFR was nearly always higher than the rate of CPI inflation. The radical monetary policies of interest rate repression during the Financial Crisis changed this relationship. Blue line = EFFR, red line = CPI. 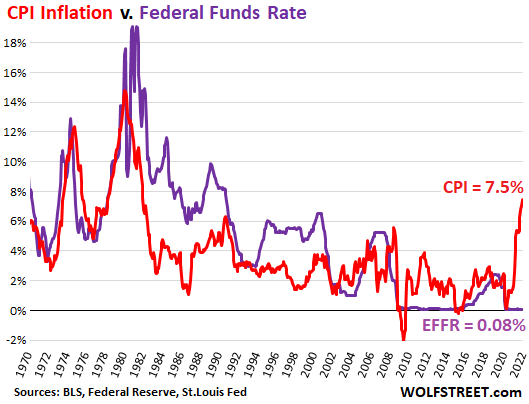 In “real” terms, adjusted for CPI inflation, the “real” EFFR is a negative 7.4%, the most negative real EFFR in the data going back to 1954. This is the result of policy error after policy error: 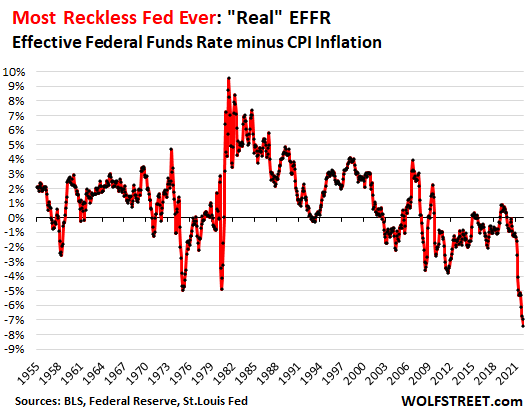