American debt slaves could only be knuckled under briefly – that much is clear now. They’re tough. And now they’re once again taking on more debt, particularly credit card debt, the most expensive debt on which banks make huge profits with obscene interest rates of 15% or 20% or 25% or more in a near-0% world. And the Fed has taken notice.

When the New York Fed released its Household Debt and Credit Report today for the third quarter, it topped it off with an article in praise of the once again rising credit card debts. Given that the New York Fed is owned by the banks in its district, including the biggest credit card issuers, it was proud of the American debt slaves that are once again charging up their credit cards.

Americans shook up the banking system and the Fed during the pandemic when they started paying down their credit cards. Following the Financial Crisis, credit card balances also fell, and for four exasperating years, but not because consumers paid them off, but because they defaulted on their debts and bank wrote off the balances.

During the pandemic, consumers, flush with stimulus cash, had actually paid down their credit cards. But that phase is now over.

Credit card balances in Q3 rose 1.7% from the prior quarter, to $800 billion, the second quarter in a row of increases, and the first back-to-back increases since 2019. OK, so not a huge massive bounce-back, but a bounce-back nevertheless: 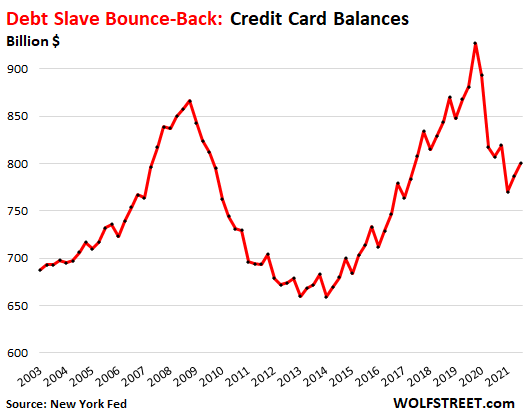 Seriously delinquent credit card balances – 90-plus days past due – fell to 8.8% of total balances, the second quarter of declines, as many consumers got caught up thanks to the flood of stimulus money that came in various forms, and included moneys-not-paid for rent and mortgages and student loans under various forbearance programs, eviction bans, and foreclosure moratoriums. All this took pressure off, and some folks got caught up with their credit cards: 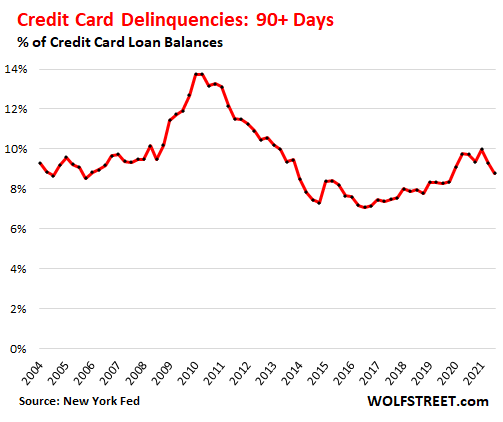 Fired up by mind-boggling price spikes of used vehicles and a massive increase of average transaction prices of new vehicles that shifted upscale and sold for over sticker, consumers borrowed a lot more to purchase a lot fewer purchases, as sales swooned due to the shortages of vehicles. The balance of auto loans and leases rose by 1.8% in Q3 from Q2, and by 5.8% year-over-year, to $1.44 trillion: 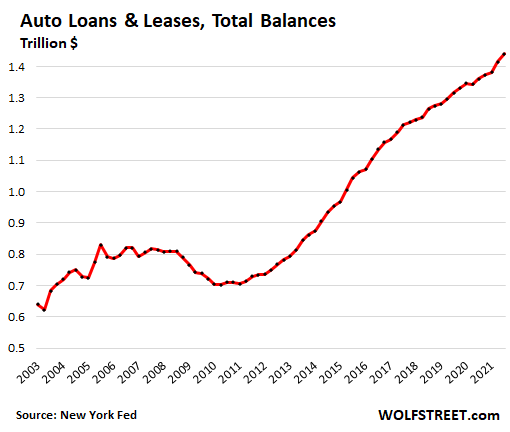 Flush with cash, many consumers got caught up with their auto loans, and serious delinquencies dropped to 4.05% of total auto loan balances, the lowest since 2017. 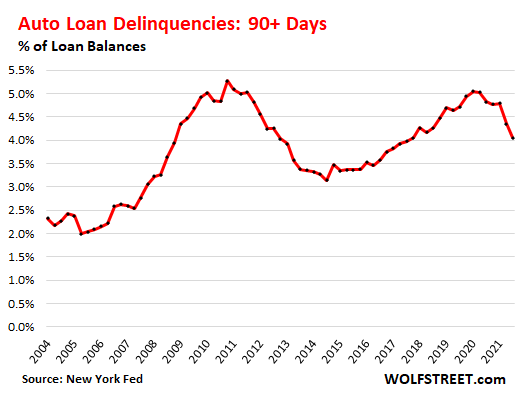 Student loans, dropping enrollment, and the miracle of forbearance.

So, student enrollment in higher education has experienced a sharp decline during the pandemic, after having already declined steadily since 2010, according to data from the National Student Clearinghouse Research Center, which tracks student enrollment. This includes a 3.2% decline in undergraduate enrollment this fall semester, following a 3.4% decline last year. 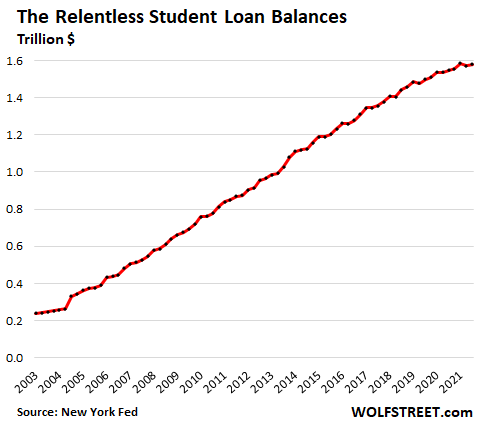 Loans that are in forbearance are not considered delinquent, no matter what the payment status, and this forbearance produced a miracle of curing serious delinquencies, though practically no one made any payments.

Serious delinquencies dropped for the seventh quarter in a row, to a record low of 5.3% of outstanding balances, down from the 11%-to-12% range before the pandemic. Forbearance swept everything under the rug, but now there’s a huge mess under the rug: 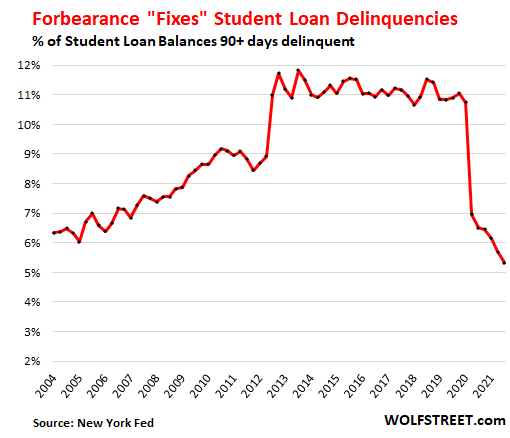 The balances of personal loans and lines of credit from banks, shadow banks, peer-to-peer lenders, and payday lenders, after falling early in the pandemic, has remained roughly flat for the sixth quarter in a row, at $420 billion: 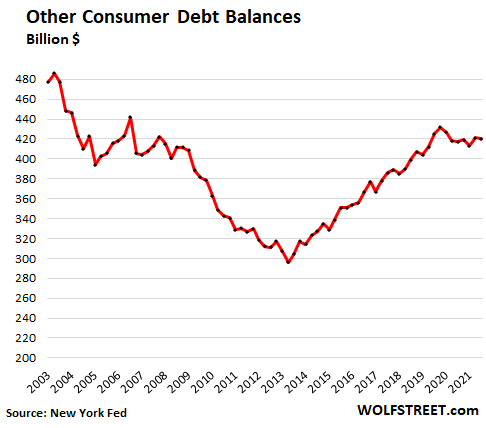 Serious delinquencies in Q3 fell to 7.1% of total balances, in line with pre-pandemic levels: 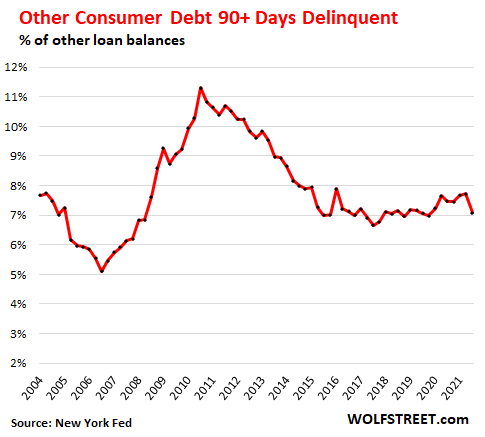 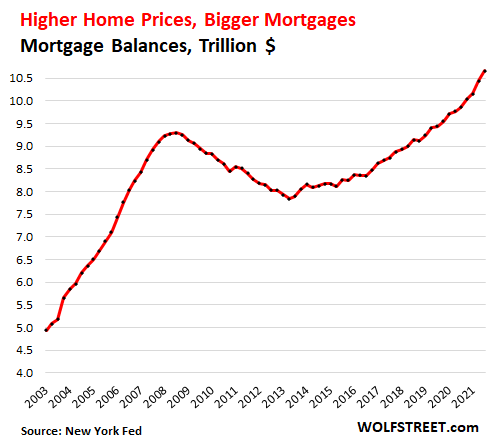 But home equity lines of credit (HELOC) balances continued their long decline, down to $320 billion, the lowest since 2004, as they have fallen out of favor, with cash-out refis being the easy alternative to using the home as a leveraged ATM. HELOC balances are down by 55% from the peak in 2009: 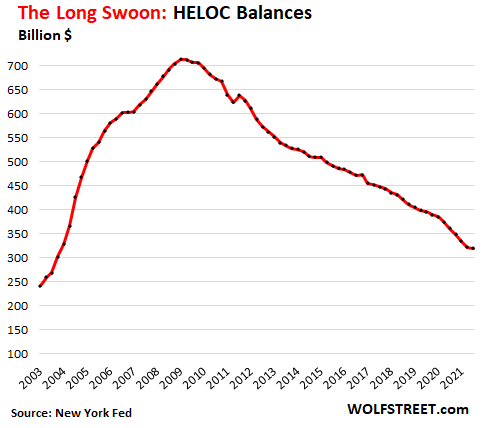 Foreclosure moratoriums and forbearance swept delinquencies officially under the rug since a mortgage is not considered delinquent when it is in forbearance. And exploding home prices see to it that distressed borrowers that cannot make the payments of even a modified mortgage to exit forbearance can sell the home, pay off the mortgage, pay the costs, and maybe have some cash left over, and thereby exit forbearance and fix the arrearage. 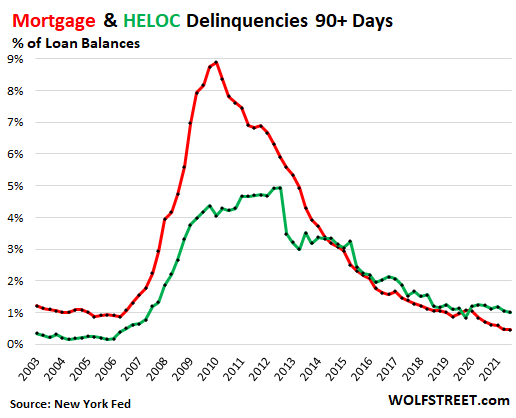 Total household debt – mortgages, HELOCs, credit cards, auto loans, student loans, and other debt – jumped by 1.9% in the quarter and by 6.2% year-over-year, the biggest jump since Q2 2008, to a new record of $15.2 trillion, as the hardy American debt slaves are bound and determined to do a good job loading up on debt: 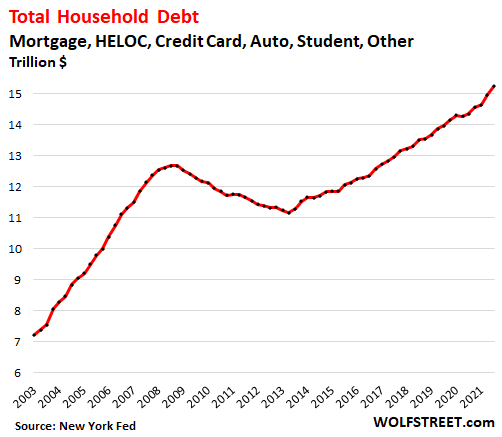 111 comments for “State of the American Debt Slaves: Foreclosure Bans, Forbearance, Delinquencies & Soaring Prices of Everything”