Massive price increases now building up in the pipeline.

At the front of the pipeline: Producer Price Index for Final Demand.

The PPI Final Demand covers the input prices for consumer-facing industries whose prices then enter into the Consumer Price Index. The PPI Final Demand jumped by 0.6% in October from September and pushed the year-over-year increase to 8.6%, same as in September, the biggest such jumps in the data going back to 2010 (red line).

The Core PPI Final Demand, without food and energy rose by 0.5% for the month and by 6.8% from a year ago, same as in September, the highest readings in the data, according to the Bureau of Labor Statistics today (green line). 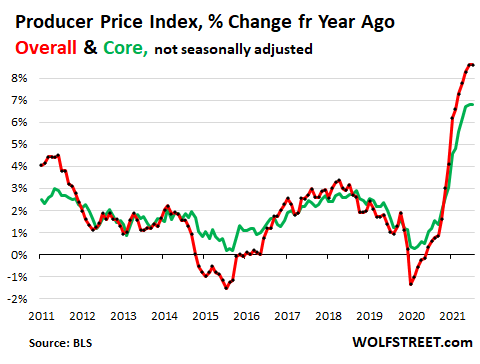 Time of the year for “hedonic quality adjustments” to kick in:

These quality improvements include changes in the infotainment systems, power trains, and standard and optional equipment packages.

In other words, the once-a-year price increases of the new model-year vehicles were reduced by those amounts, which is why we have the amazing WOLF STREET F-150 and Camry price index, which shows actual prices versus the CPI for new vehicles going back 30 years.

In terms of the PPI, tor year-over-year comparisons, there is always the “base effect,” meaning that the level of the index last year impacts that year-over-year percent readings. And there is always the cumulative nature of inflation. The chart below shows the PPI and Core PPI as index values, which avoids the base effects and shows the cumulative nature of inflation. Note how the curve has steepened over the past 12 months: 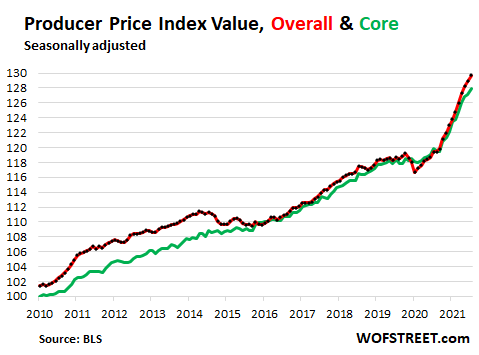 Some prices that had previously spiked ticked down in October, while other prices that had risen more moderately in prior months, or had declined, jumped. The inflation game of Whac-A-Mole. The overall indices average out.

Up the pipeline: PPI Intermediate Demand.

Going backwards up the pricing pipeline of the production flow.

Intermediate Demand, Stage 4, the input cost for final demand: +0.7% in October from September, with goods +1.2% and services +0.1% month-over-month. Year-over-year +11.8%. These industries create inputs for consumer-facing industries (black line in the chart below).

Intermediate Demand, Stage 2: exploded by 4.7% in October from September, with goods spiking by 9.8% month-over-month and services ticking up 0.1%. Year-over-year +27.8%, the highest in the data (red line). 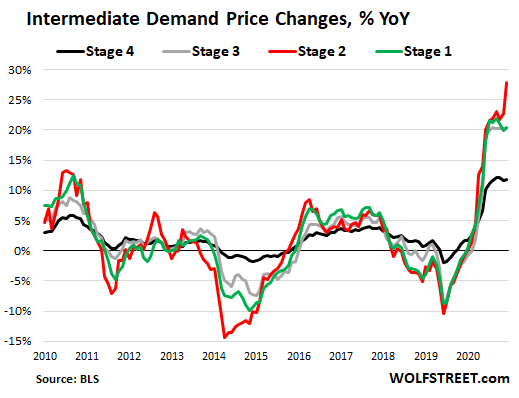 In the three production stages furthest up the pipeline – Stages 1-3, red, green, gray – prices have all jumped between 20% and 28% year-over-year. These are massive price increases now building up in the pipeline; and they will flow to some extent and in some form into future consumer prices.

With the new inflationary mindset among consumers who are now willing, and with vehicles even eager, to pay whatever, and with surging wages across all industries and continued massive monetary and fiscal stimulus, I don’t see a whole lot of hurdles for this inflation to get passed on to the consumer.

85 comments for “Further up the Producer Price Pipeline, Inflation Rages at over 20%, Heading for Consumers”