Americans, as they struggle with the meaning of the Fed’s terms “transitory” and “temporary,” expect that inflation one year from now will rise to 5.7%, the 12th month in a row of relentless increases, the highest in the data going back to 2013, creating a beautiful record spike (red line), according to the New York Fed’s Survey of Consumer Expectations released today. And consumers expect inflation in three years to be at 4.2% (green line).

The Fed keeps saying in its FOMC statements that it wants “longer‑term inflation expectations” to remain “well anchored” at 2%. And they’re now totally unanchored and spiking to high heaven. 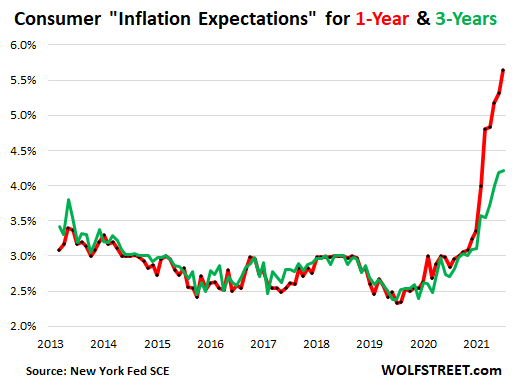 “Inflation expectations” is a key metric for the Fed, based on the theory that consumer price inflation is in part a psychological phenomenon – the inflationary mindset, as I call it.

It’s the theory that rising inflation expectations alter consumer behavior, such as by moving purchases forward before things cost even more, and accept higher prices, rather than balking, as they would have done before. And this altered consumer behavior contributes to higher inflation in the future.

These inflation expectations are an outgrowth of reality on the ground for consumers. For the Fed, they’re adding to a war chest of reasons for hiking rates.

Inflation expectations are much higher where people spend most of their money.

Expectations of rent increases one year out have been surging all year and eked out a new record in October: 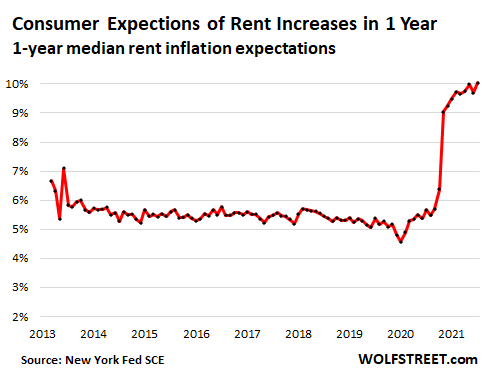 Consumers expect home prices – which are not included in the Consumer Price Index, as two rent factors determine the housing component of CPI – to rise by 5.5%. This is below the peak of 6.2% in May.

Consumers are not very good in seeing future inflation coming though they’re very good at seeing and griping about actual inflation. In March 2021, they still expected inflation in March 2022 to be 3.2%. But since then, after continuing to pay higher and higher prices, they changed their mind. Now they’re expecting inflation in October 2022 to be 5.7%.

Inflation expectations are an indicator of how long consumers believe the rhetoric coming from the Fed and the media about inflation being 2% or being anchored at 2% or temporarily going above 2% but going back to 2% soon.

Now, as actual prices have surged, consumers can see where this is going, and they can see that even the Fed is starting to back off its mantra that this red-hot inflation is just “temporary,” and they’re not fooled by some Fed officials’ efforts to redefine “temporary” to mean the opposite of temporary.

It’s at the point when consumers think inflation will remain high that they change their behavior and contribute to even higher inflation.

And they’re supported by unspent stimulus money, repressed interest rates, cash-out refis, magnificent asset price inflation that they can leverage, and by wages that are surging in all industries at the highest rates in two decades.

There is now nothing standing in the way of inflation spiraling higher: Consumers are flush with money, and the Fed still has its foot all the way on the gas, including near-0% short-term interest rates and printing $120 billion a month to repress long-term interest rates despite actual inflation that has been above 5% four months in a row. The Fed will now back off slowly from its money printing mania, but that means that it will blow through the red lights at the next bunch of intersections at slightly lower speeds, but it’ll still blow through red lights, and consumers can see that.

195 comments for “Americans Blow Off Fed Propaganda Inflation is “Temporary””