Powered by the inflationary mindset, consumers pay whatever, and dealers aggressively bid up prices, confident that consumers will pay whatever.

Used vehicle wholesale prices spiked by 9.2% in October from September, the biggest month-to-month spike in the data going back to 1997, after having spiked by 5.3% in September, according to Manheim, the largest auto auction operator in the US.

Year-over-year prices spiked by 38% from the already sky-high levels last October. Compared to October 2019, prices shot up by 59%. A couple of months ago, used vehicles were cited as indication why inflation would be temporary because there had been a slight dip in used vehicle prices, but that has now been tossed out the window.

Wholesale prices, established when vehicles sell at auctions, lead the Consumer Price Index for used vehicles by about two months. 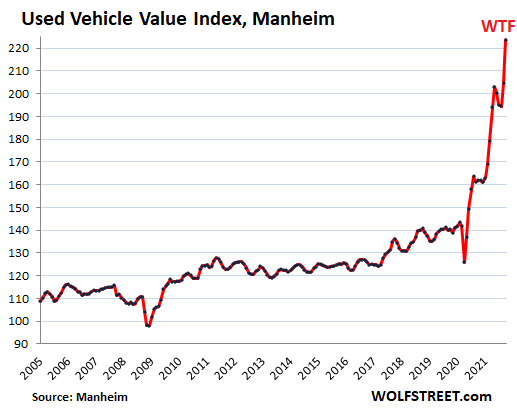 The Used Vehicle Value Index is adjusted for the mix and mileage of vehicles that are sold at auction, and for seasonal factors. So Manheim said:

These buyers are much more aggressive because they’re confident that they can pass the higher prices on to consumers because consumers pay whatever, at this point.

At some point, there will be a miscalculation, and dealers will have trouble passing those kinds of price increases on to consumers, but apparently not yet. Consumers are still in the glorious and intoxicating inflationary mindset that price doesn’t matter, and they’re paying whatever.

This eagerness by consumers to pay whatever is astonishing because a vehicle is for most people the ultimate discretionary purchase: Most people can just keep driving the vehicle they already have for a few more months, or a few more years, and they don’t have to buy today. Americans have shown that they can go on buyer’s strike, for example during the Great Recession when vehicle sales collapsed and people just kept driving what they already had.

But the opposite is happening now: people buy no matter what the price. That’s the inflationary mindset.

Despite this being October, when used vehicle wholesale prices normally dip, no category saw price declines, and the much-maligned mid-sized sedans – GM, Ford, and FCA have completely gotten out of the business of making sedans – jumped by the most.

On a year-over-year basis, prices of midsize sedans spiked by 40%, behind only vans, which spiked by nearly 50%. Most of the vans are delivery-type vans, and the delivery business is red hot and new equipment is hard to get. Note that pick-up prices surged 27%, down from totally insane spikes of 70%-plus in April in May: 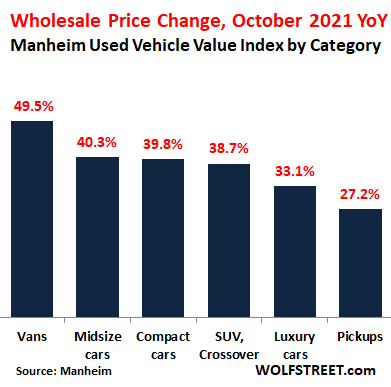 Supply of used vehicles for retail, which normally is about 44 days of sales, rose to 39 days in October, from 37 days in September, still below normal, but not catastrophically below normal, such as seen with new vehicles.

Wholesales supply, which normally runs around 23 days, remained at 18 days in October, same as in September.

So supply is tight, given the reduced influx from rental fleets, but it’s not a “shortage,” such as there is a shortage in the new vehicle market. Still, consumers are paying whatever, and auto dealers are aggressively bidding up wholesale prices to buy inventory, confident that that consumers will continue to pay whatever.

58 comments for “Used Vehicle Wholesale Prices Spiked by the Most Ever. Retail Prices to Follow”