Hammered by the worst inventory shortages in memory, new car and truck sales had plunged five months in a row. But in October, sales ticked up to 1.05 million vehicles, from 1.01 million vehicles in September, which had been the worst September since the sales collapse in 2010.

This left October’s new vehicle sales down 34% from 1.6 million vehicles in March when there were still vehicles on dealer lots to sell, and down 22% from October 2019, according to data from the Bureau of Economic Analysis.

Sales of “cars” (sedans and muscle cars such as the Mustang and Corvette) dropped further to 207,100 units, the lowest in many decades except for the lockdown freeze in April 2020. Ford, GM, and FCA (owned by Stellantis) have exited the sedan market, leaving it to foreign automakers and Tesla.

Sales of “trucks” – pickup trucks, SUVs, car-like compact SUVs built on what is essentially a car chassis, and vans – rose to 839,200 vehicles. Vehicle sales are seasonal, and the low points in the chart are Januarys except during the lockdown last year and the low points this year when dealers ran out of inventory: 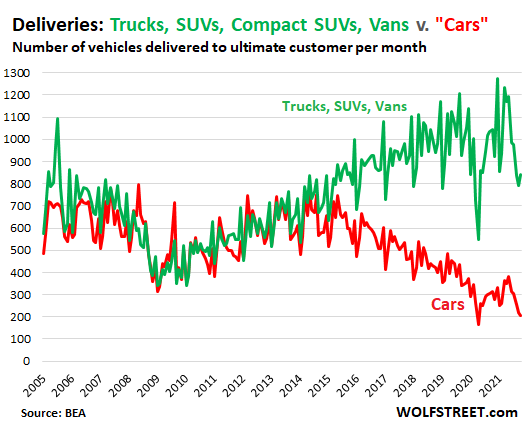 The Seasonally Adjusted Annual Rate (SAAR) of sales – which adjusts for the number of selling days per month and for seasonal factors – ticked up to an annual rate of 13.0 million vehicles, down 21% from October 2020, and down 22% from October 2019. 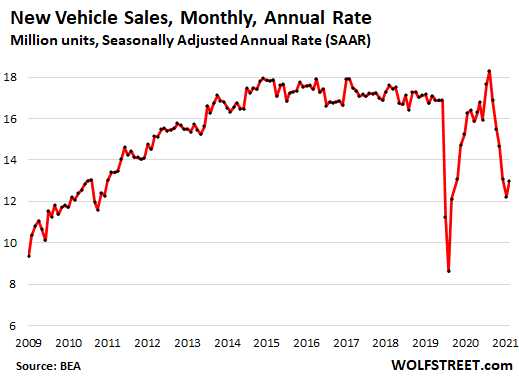 The plunge in sales is due to a supply shock triggered largely by the global semiconductor shortages that has hit some automakers much harder (for example Ford, GM, Stellantis) than others (for example, Toyota, Tesla, BMW), and dealers have essentially run out of popular models.

As a result, automakers have been prioritizing their highest-priced models and trim packages to maximize their revenues, given the plunge in unit sales. And there are enough consumers with big gains in stocks, real estate, and cryptos, and from their own businesses, fat compensation packages, the proceeds of the forgivable PPP loans, and whatnot, that these high-priced units flew off the lot.

The prioritization of high-priced models and the cut in incentive spending caused the Average Transaction Price (ATP) to spike to a new record in October of about $44,000, according to J.D. Power, up 19% in the nine months since December 2020 and up by 26% from December 2019: 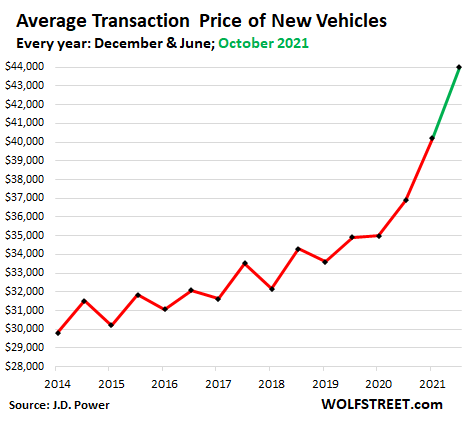 This explosion of the Average Transaction Price saw to it that, despite the plunge in sales, consumers (excludes fleet sales) spent $41.5 billion on new vehicles, the second-highest for any October, according to J.D. Power estimates.

Automakers and dealers are making enormous amounts of gross profits per vehicle sold, thanks to the simple but novel fact that Americans don’t care anymore how much they spend on a new vehicle and how much over sticker they’re paying – those Americans that are still buying new vehicles.

Dealers made on average $5,129 per unit in gross profit, including from finance and insurance (F&I) sales, in October, a massive record, and up by 75% from October 2020, according to J.D. Power.

And they’re getting away with it because consumer behavior has undergone a revolution – going from price-conscious to price-doesn’t-matter within the course of 18 months.