The Fed is going to have a heck of a time calling inflation expectations “well anchored.”

People are now blowing off the Fed’s ever shakier assertions that this inflation is “temporary” or “transitory” and will somehow magically go away on its own despite the massive monetary and fiscal stimulus still being thrown out there. 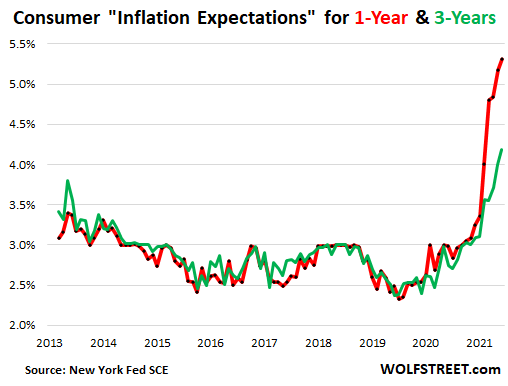 The idea is that consumer price inflation is in part a psychological phenomenon, that inflation expectations are a key factor in driving future inflation. The idea is that once consumers expect inflation in the future and accept it – what I call the inflationary mindset – they will adjust to it, and pay the higher prices, rather than refuse to buy at those prices.

We’ve already seen this in many places, including the crazy spiking used vehicle prices, and new vehicle prices. And thereby, the theory goes, these rising inflation expectations enable companies to raise prices and get away with it and thereby enable inflation to take off.

Those inflation expectations have been taking off for months, and the Fed is going to have one heck of a time explaining that they’re still “well-anchored.”

By category, inflation expectations are much worse.

People expect much faster price increases where they actually spend most of their money – housing, food, gasoline, health care, and college education – than what they expect for the theoretical overall inflation rate.

These categories are dominant in the basket of goods and services of the Consumer Price Index (CPI). Housing costs – based on different measures of rents – account for one-third of CPI.

So it’s interesting that consumers figure the overall inflation rate one year from now is going to be 5.3%, when they expect the dominant factors that drive this rate to be way higher, ranging from 5.9% for college education to 9.7% for rent:

They expect price increases to outrun their earnings by a wide margin.

People expect their earnings in a year from now to be up by 2.9% from today, according to data from the same Survey of Consumer Expectations (green line in the chart below); but they expect overall prices to be 5.3% higher (red line). And worse, they expect actual prices in the dominant categories – housing, food, gasoline, health care, and college education – to be up between 5.9% and 9.7%.

People expect inflation to eat all of their earnings increases and eat their lunch and dinner on top of it. In sentiment surveys, consumers have already expressed their frustration with this concept, as they’re coming to understand that inflation is just the loss of the purchasing power of their dollars, and their wages denominated in dollars, and does not represent “growth”: 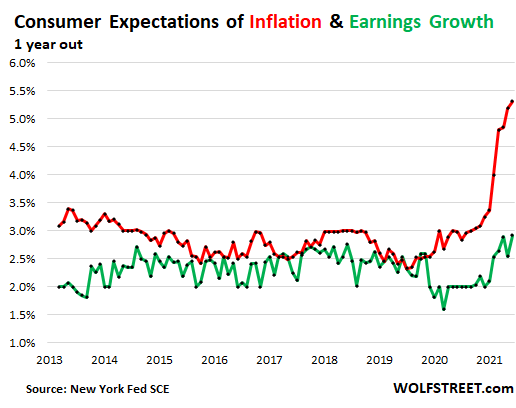 These inflation expectations are also nurtured by the Fed’s monetary policies – the 0% interest rate policy and $120 billion a month in QE – along with the stimulative effects of the government’s deficit spending.

The Fed, which has been saying it will back off these policies, hasn’t lifted the foot off the accelerator yet, but is barreling through one red light after another.

For consumers, the loss of purchasing power of their labor is real and painful.

For wealthy asset holders, the purchasing power of the dollar is less an issue, and it’s no issue higher up on the wealth scale. There, the fear-factor is what the Fed might do to crack down on inflation because that would bring down bond prices (as yields rise), and it would bring down stock prices as interest rates rise and credit gets more expensive and harder to get, and higher bond yields will attract dividend investors away from stocks, and it would bring down real estate prices because today’s inflated prices don’t make sense at much higher mortgages rates.