A costly slow process that gives some buildings a second life.

Commercial buildings – not the land – are depreciated to zero, and for most of them, that’s the ultimate value. But for some, there is a second life with a different purpose: Redevelopment into residential buildings.

For 2021, a total of 20,122 apartments are expected to be completed, in 151 buildings of all types, with a surging share of office buildings, according to Yardi Matrix data cited by sister company RENTCafé. But it’s not huge: By comparison, new construction starts of multi-family buildings with five or more units averaged around 370,000 units per year over the past five years. The number of completed buildings in 2021, at 151, are over double the number in the prior two years. 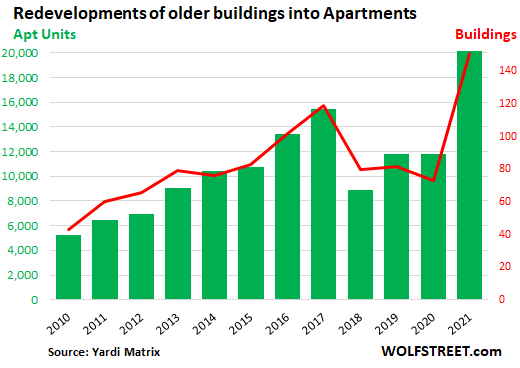 Redevelopment of commercial buildings into residential buildings is a slow and expensive process, often involving the building defaulting on its debts and ending up with the lenders that sell it, usually at a big loss, to a developer who, now with a much lower cost base, can spend lots of money to redevelop it into apartments.

Office conversions have been the leader since 2013, and they shot higher in 2020 and 2021 and have far outdistanced factory and hotel conversions. Hotel conversions are easier to accomplish because the existing floorplans, utilities, and other aspects are less costly to adapt for residential use. But the real volume going forward is in office buildings, given the vast amount of space available, though they’re more costly to convert than hotels: 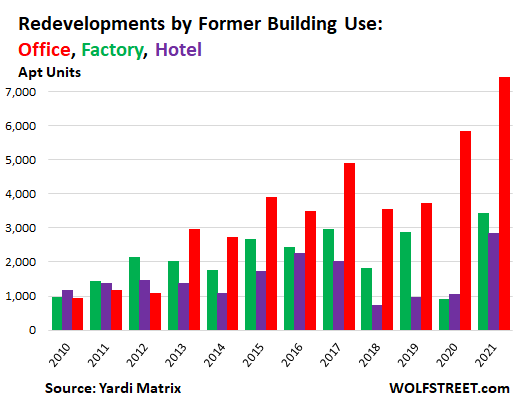 Redevelopments could cost about 30% to 40% less than new construction for the same number of units, but only if the cost of the site and the building is not significantly higher than the cost of site acquisition for new construction, according to Emil Malizia, at the Department of City & Regional Planning, at the University of North Carolina at Chapel Hill, cited by RENTCafé.

Here is an office redevelopment, in Washington, D.C., The Wray with 150 apartment units, in a building once occupied by the State Department: 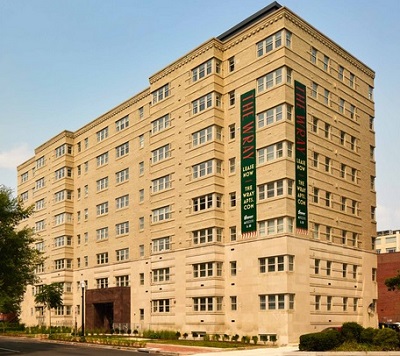 Going forward, for 2022 and beyond, 306 buildings are already in the pipeline for redevelopment, with an expected 52,700 apartment units. This includes projects that are under construction, to be completed in 2022 and after, as well as projects that are in the approval process or in the planning stages, according to Yardi Matrix data. Of them, 23% are office conversions:

Office conversions take years before construction can even start. First, the remaining tenants – they have long-term leases – have to leave. The building has to go through a default and foreclosure process so that lenders can sell it. Then the lenders have to find a developer willing to take on the project, and a deal has to be made. Then the developer has to start the planning, obtain funding, get the permits, etc. before construction can even start.

If no developer can be found because the building is not worth redeveloping, or is not suitable for redevelopment for other reasons, such as location, or would cost too much to redevelop, given the local housing market, and if it can no longer compete in the local office market, it may have to be torn down after years of sitting there empty and boarded up, to make room for new construction, a small park, or a parking lot.