These companies are continuing to pay rent but want to cut their carrying costs, and they try to sublease the space to some other company, and they undercut landlords that are trying to direct-lease competing office space. Huge sublease inventories are the hallmark of this office market crisis.

Here’s how seven major office markets in the US fared through Q3 2021 – struggling with huge amounts of sublease inventories and sky-high overall inventories of office space for lease, with availability rates ranging from a catastrophic 31.4% in Houston to Manhattan’s record 18.4% (data from real estate services provider Savills): 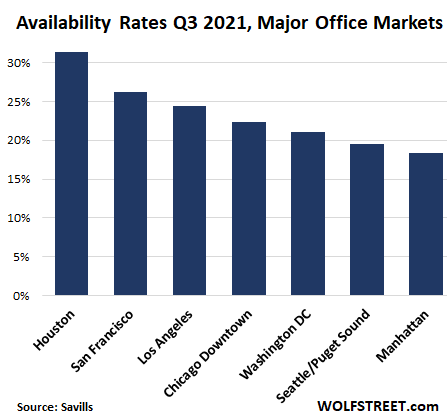 Houston, first the oil bust then working from home.

The immense Houston office market – 192 million square feet (msf) of office inventory – has been the worst office market for years, after its construction boom collided in 2015 with the Great American Oil Bust, which led to downsizing, layoffs, and bankruptcies of numerous oil and gas companies headquartered in Houston. Then came the pandemic and working from home, and the recognition that companies wouldn’t need that much office space in the future.

Total availability ticked up to a catastrophic record of 31.4%, according to Savills. Class A office space availability rose to 33.6%, meaning over one-third is available for lease. 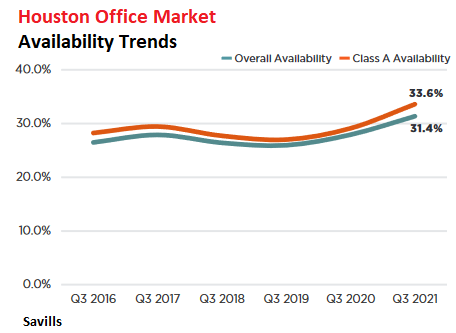 By submarket, the availability rate ranged from 10.3% in Medical Center/South Houston to 53% in North Belt/Greenspoint. In the Central Business District, 33.8% of the total office space was on the market for lease.

Average asking rents have been stable at around $29 per square foot (psf) per year, according to Savills. But those are copy-and-paste asking rents. Actual deals that were agreed to differ, often with lower rents and aggressive concessions, periods of free rent, and amenities, that sharply reduce effective rents.

The uptick happened amid the jump in oil and gas prices. But oil and gas companies too have switched to hybrid work-from-home models for many of their employees, putting a damper on their office needs.

San Francisco, from office shortage to office glut in no time.

The office market in San Francisco is about half the size of Houston’s. Just a few years ago, it was one of the hottest, tightest, and most expensive office markets in the US. But the erstwhile heavily hyped office shortage has turned into a magnificent office glut, second only to Houston’s, and getting closer. 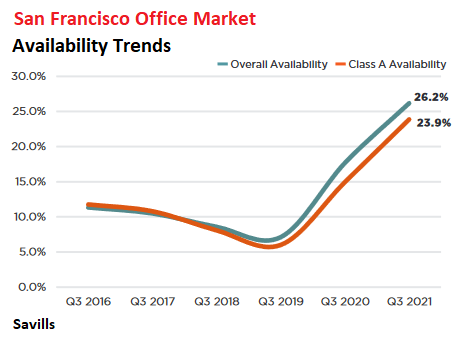 Sublease inventory, which had exploded to 8.9 msf in Q1 as companies put their unneeded and empty office space on the market, ticked down in Q3 to a still huge 8 msf after some leases were signed.

But in this market that has gotten hit so suddenly by a collapse in demand and a glut in supply, pricing remains to be discovered, and asking rents are a landlord’s wish. But deals are being negotiated.

Total availability rose further, to 24.4%. Available sublease space remains huge, but ticked down to 8.9 msf (from the record 9.2 msf in Q2), “as sublease space has either been leased, pulled off the market, or has become directly vacant,” according to Savills. 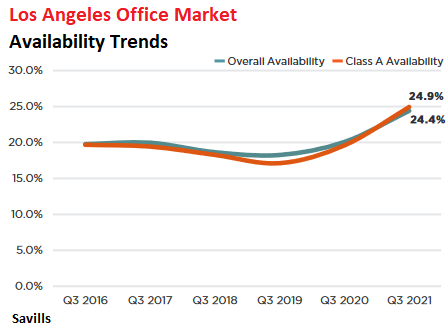 In a funny twist, asking rents increased to $3.87 psf per month (about $46.44 per year) “due to higher-priced trophy sublease space, as well as new speculative office projects now under construction,” according to Savills.

But “average taking rents have largely decreased,” according to Savills. “Combined with higher concessions such as rental abatement and tenant improvement allowances, landlords have remained aggressive at competing for occupancy.”

Overall availability rose to 22.4% in Q3, though sublease space ticked down to 5.7 msf, as aggressively priced high-quality spaces found takers. By submarket, availability ranged from 15.9% in North Michigan Avenue to 25.5% in Far West Loop/Fulton Market: 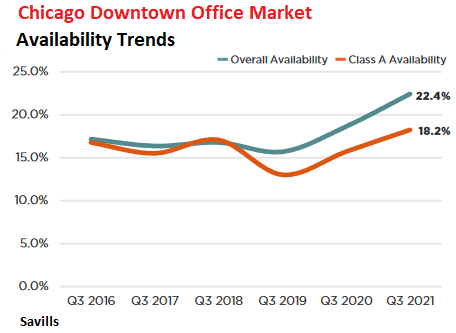 Overall asking rents ticked up a smidgen to $40.70 psf per year and have essentially remained flat for three years, but effective rents declined “across all properties apart from trophy and new construction,” according to Savills. And “they have fallen more precipitously in Class B buildings, where availability sits at 26.1%.”

Overall availability, after jumping for seven quarters in a row, remained at the record of 21.1% established in Q2. Sublease availability, which hit a record of 3.4 msf in Q4 2020, has now ticked down 3.0 msf, “as many organizations have been successful at subleasing their space or have taken it off the market as they decide to re-occupy it.” 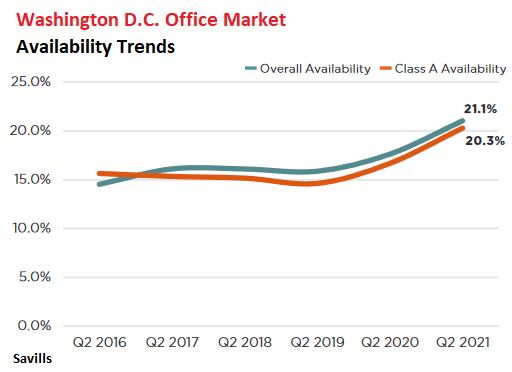 But 2.3 msf of new construction is still coming down the pipeline, with two-thirds expected to be delivered within a year, and only half of it is preleased.

Asking rents have remained roughly flat for the last three years, in Q3 at $55.82 psf per year. But according to Savills, “hefty concession packages continue to validate underlying tenant-favorable conditions,” with new long-term, Class A leases now getting “an average of $147.00 psf in tenant improvement allowances and 22 months of free rent totaling $267.00 psf in total value.” 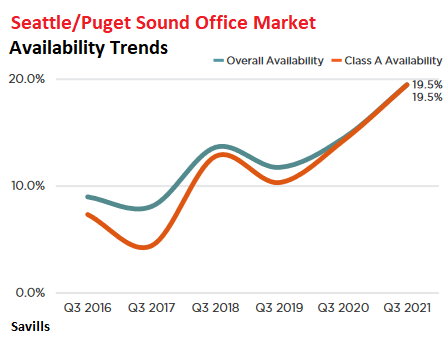 Overall availability in the largest office market in the US with 468 msf of inventory, remained at the record level of 18.4%, first set in Q2. By submarket, availability ranged from 11.4% in Hudson Square to 23.7% in the Financial District and 24.5% in Soho. 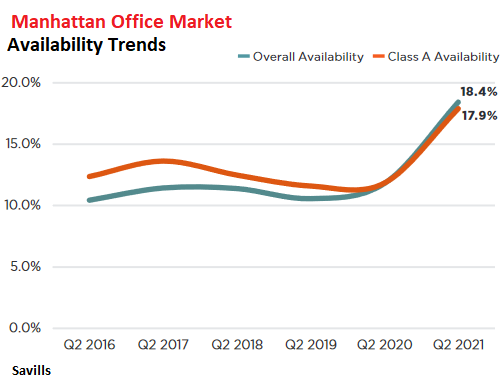 Leasing activity rose to 7.7 msf, up sharply from the prior quarters and down only 10% from Q3 2019, as the market “exhibited signs of vitality,” according to Savills.

Average overall asking rents declined to $75.08 psf per year, down about 10% from Q1 2020. “However, taking rents and concessions have further widened the gap between asking and effective rents,” Savills reported, adding that effective rents “will continue to decline in the coming quarters as owners continue to face competition to attract and retain tenants.”