What caught the media’s attention in today’s CPI inflation data was that the expectations by economists had finally risen enough to where CPI came in a notch “below expectations,” after having exceeded expectations for months, and often by a lot.

The Consumer Price Index for all Urban Consumers (CPI-U) rose 0.3% in August from July, and 5.3% compared to August last year, the third month in a row of 5%-plus year-over-year increases after having risen 5.4% year-over-year in July and June. The three months were the fastest increase in CPI since June 2008 (5.6%), and all four months were the fastest since January 1991, according to data released by the Bureau of Labor Statistics today: 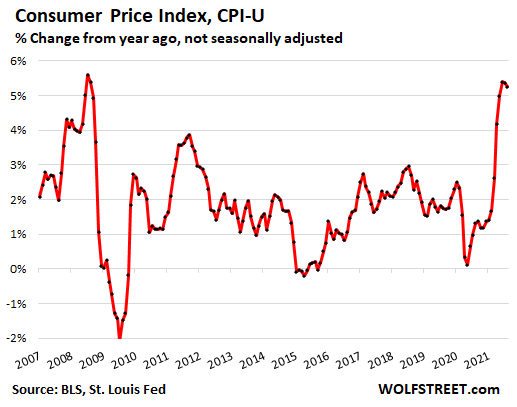 The 0.3% month-to-month increase in the overall CPI reflected:

A decline of 0.2% for the month in the CPI for durable goods, which was still up 12.8% year-over-year, after having been up by 14.6% at the peak in June, the biggest year-over-year spike in the data going back to 1957 (red line in the chart below).

An increase of 0.5% for the month in the CPI for non-durable goods (mostly food and energy), which pushed the index up 7.4% year-over-year, matching the multi-year record of May (green line).

An essentially unchanged-for-the-month CPI for services, which was up 3.0% year-over-year (purple line). The services CPI is dominated by the CPI for housing costs, which accounts for nearly one-third of total CPI, but it barely ticked up, despite soaring actual housing costs – more on that phenomenon in a moment. 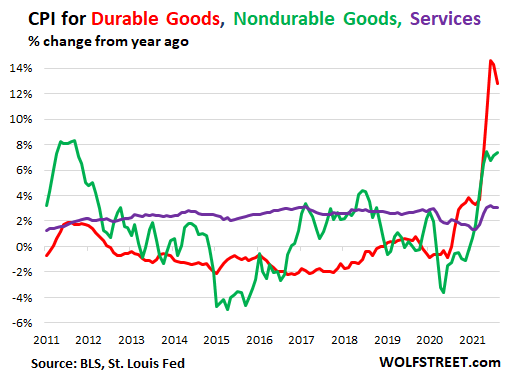 Homeownership costs and rents, not including utilities and other housing-related costs, are the largest and most crucial category, accounting for 31% of the overall CPI, but it hardly inched up despite home prices that have surged at historic rates.

“Rent of primary residence” weighs 7.6% in the overall CPI, and it ticked up just 0.3% for the month, after having been stuck at a monthly increase of 0.2% all year. For the 12-month period, it rose 2.1% for the year, up from the 1.9% year-over-year increases in prior months. This CPI for rent had been running in the 3.5% to 4% range since 2016 until it softened in the spring last year. There are big urban areas were rents have sagged over the past year; but in many other cities, rents have spiked. Depending on where tenants live, their personal rental inflation is going to look a whole lot different. 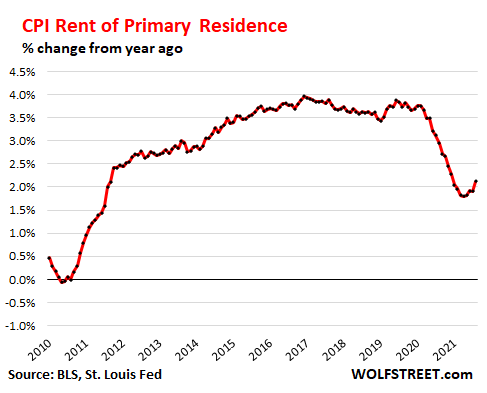 The CPI for “Owners’ equivalent rent of residences,” which stands in for the costs of homeownership and weighs nearly one quarter in the overall CPI, inched up just 2.6% year-over-year. But measures that attempt to track reality have exploded. The national median price of existing homes spiked by 23% year-over-year, according to the National Association of Realtors. And the Case-Shiller Home Price Index spiked by a record 19%.

The Case-Shiller Home Price Index tracks the price changes of the same house and is therefore a measure of house price inflation. The disconnect between the record double-digit home price increases of the Case-Shiller Index (purple line) and the CPI’s homeownership component’s puny increase of 2.6% (red line) is due to the CPI’s structure.

The effect is that the entire services CPI, thereby the overall CPI, is artificially kept down by the way housing cost inflation is measured. 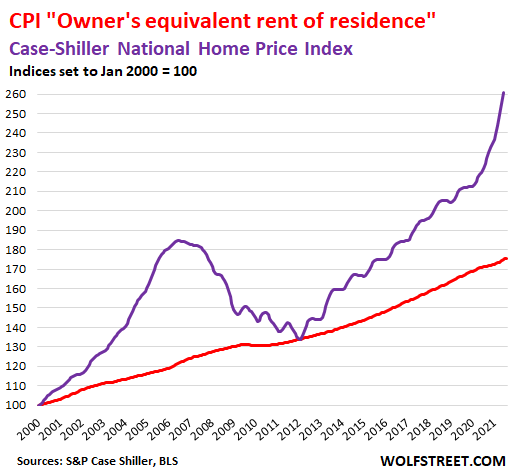 Nearly half of the food CPI is “food away from home,” which rose 4.7% year-over-year, the biggest increase since 2009, not spiking but working its way higher as restaurants are carefully raising their prices to meet the higher costs they’re now facing.

The CPI for used vehicles fell by 1.4% in August from July, the first decline from the ridiculous spike as some price resistance is finally starting to crop up. It pushed down the durable goods CPI, shown above. Retail prices follow wholesale prices, and used vehicle wholesale prices started ticking down in June from their equally ridiculous spike, but prices remain ridiculously high. The CPI for used vehicles is still up by 32% from a year ago. 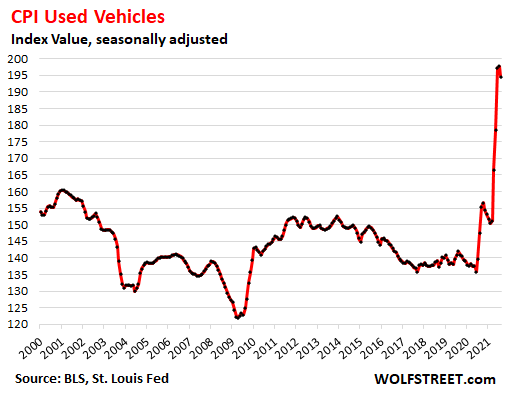 The CPI for new vehicle spiked the most since June 1981. Month-over-month, it spiked by 1.2% and year-over-year by 7.6%. Inflation Whac-A-Mole: even as the used vehicle CPI starts ticking down, another index spikes, which is how inflation works, circling from category to category. 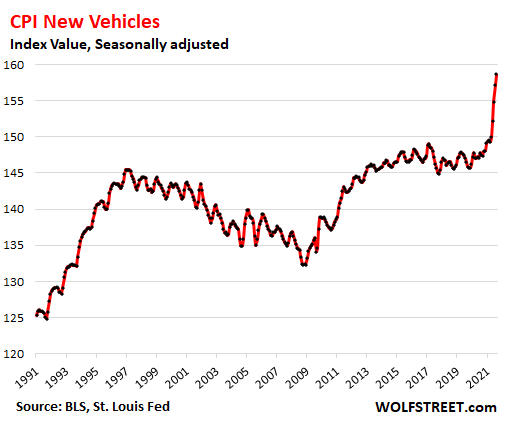 “Hedonic quality adjustments” hold down the CPIs for new & used vehicles. CPI attempts to measure price changes of the same item over time. When the price increases because the product gets better, then the portion of the price increase related to the improvement of the product isn’t considered inflation (loss of purchasing power). And this makes sense.

These “hedonic quality adjustments” are an attempt by the BLS to account for improvements in vehicles over the years. For example, over the decades, the estimated added costs each step along the way of migrating from a three-speed automatic transmission to a 10-speed electronically controlled transmission are removed from the CPI.

This loss of purchasing power is “permanent.” The only event that can undo tiny fragments of decades of losses of purchasing would be a period of deflation when prices on average are dropping, as the dollar is regaining some purchasing power that had been lost in prior months. In the US, the is an extremely rare event that happened only a few quarters during my lifetime.The rest of the time, inflation ruled.

This is the loss of purchasing power of $1 starting in January 2000. Note the brief episode of deflation during the Financial Crisis, when consumers found that they could buy just a little more with their money. But the fun didn’t last. In July and August, it was below 62 cents: 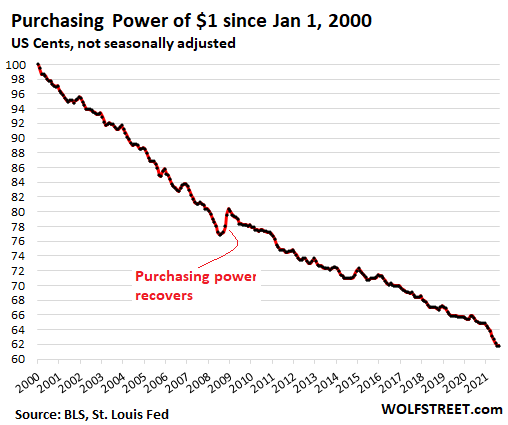