“Normalization” or “deceleration,” as this phenomenon is called, is setting in.

Prices of existing single-family houses, condos, and co-ops dipped in July, reverting to seasonality for the first time since 2019, amid surging price reductions. Single-family house sales dropped 4.1% in July, from a year ago, the first decline since the lockdowns. Condo sales rose. Inventories rose for the fifth month in a row. And new listings are catching up with pre-pandemic trends, as sellers emerge from the woodwork. All this according to data from the National Association of Realtors today.

Home prices dipped in July from June, breaking the crazy spiking prices for the first time this year. Back in May and June, the median price for existing homes had spiked by a historic record of over 23% from a year earlier. But in July, the median price dipped to $359,000, reducing the year-over-year gains to a still gigantic 18.8%.

During the pandemic, all seasonality was thrown out the window. But in July, prices reverted to seasonality, dipping from the seasonal peak in June. Reverting to seasonality is the first step back from the craziness, and toward “normalization” or “deceleration” as this is now called, (data via YCharts): 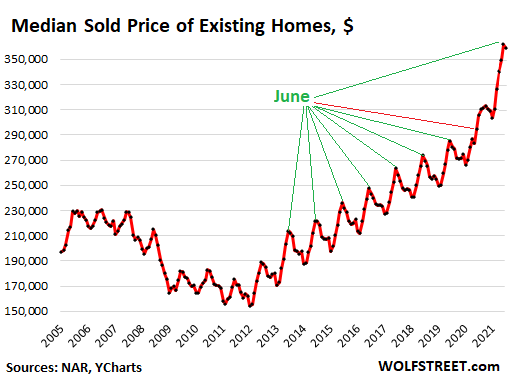 Price reductions surged by 37% in July from June, the fifth month in a row of increases, and the largest month-to-month increase in the data provided by realtor.com’s residential listings database. The number of price reductions in July was still relatively low, but the recent surge shows the beginnings of a sense that “normalization” or “deceleration” is setting in: 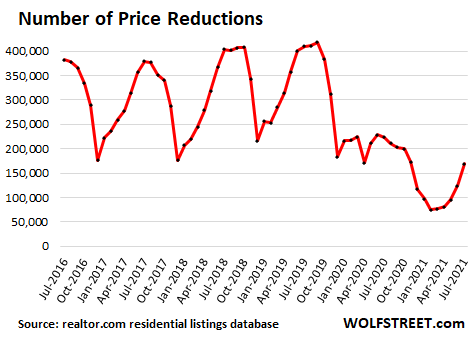 Sales of single-family houses on a monthly basis, and not including condos, dropped 4.1% year-over-year in July, to 516,000 houses, the first year-over-year decline since the plunges during the lockdown. July last year was when the spike in home sales began: 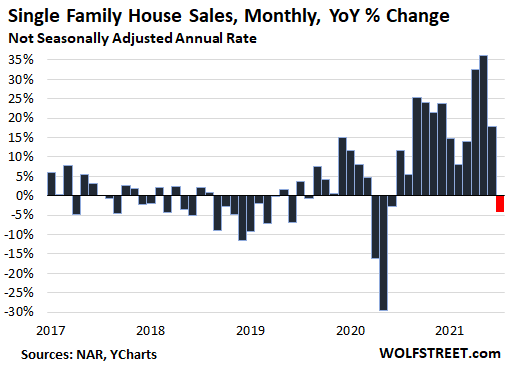 Sales of house and condos combined, and expressed as “seasonally adjusted annual rate of sales” ticked up in July from June, to an annual rate of 5.99 million homes. Year-over-year, that was up 1.5%, the smallest year-over-year uptick since the lockdowns, with house sales down 0.8%, but condo sales, which had collapsed last year, up by 22% (historic data via YCharts): 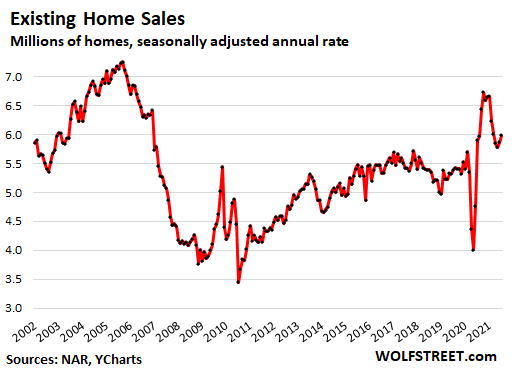 Sellers emerge from the woodwork.

New listings normally drop sharply in July from June, continuing their drop from the seasonal peak in May, but not this year.

In July, new listings were down just a tiny bit (-0.6%) from June, and were up by 6.5% from July 2020, the fourth month of year-over-year increases in a row, and the largest one, as new-listings momentum has been picking up. New listings in June and July reached the highest counts since September 2019 (data via realtor.com residential listings database; the Julys are connected by a green line): 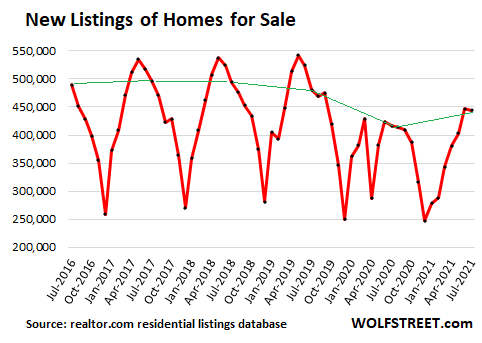 Inventory of unsold homes listed for sale rose to 1.32 million homes, the fifth month in a row of increases. Inventory is still tight, but is at the highest level since October 2020.

Supply of unsold homes on the market rose to 2.6 months, up from the low point of 1.9 months in December and January, and the highest supply since September 2020 (historic data via YCharts): 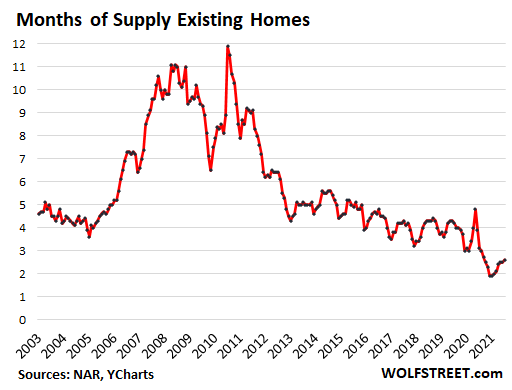 This is still a historically perfect time to sell a home, after prices have spiked at a record pace and are now sky-high, though they dipped a little; and mortgage rates are still historically low, though the Fed is now mumbling about trimming back its support for mortgage rates by ending QE; and supply of homes on the market is still low, though it has been rising all year.

And Americans concur: It’s a terrible time to buy a home. According to Fannie Mae’s monthly National Housing Survey for July, which started tracking buying and selling sentiments of homeowners and renters back in 2010, a record 66% of the respondents said that “It’s a bad time to buy a home”: 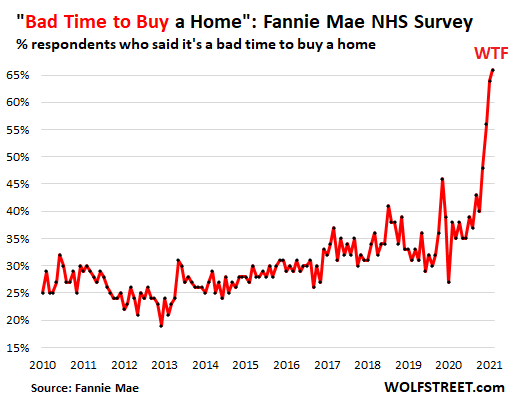 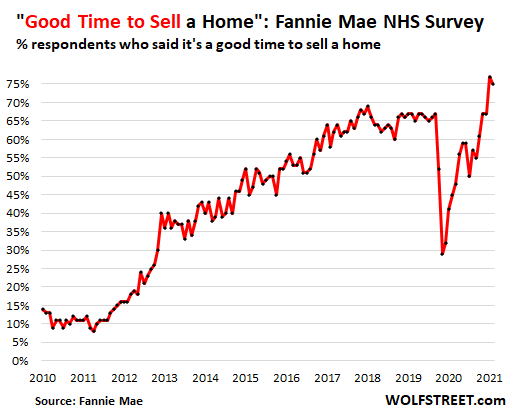 Investors and second-home buyers still have the hots for buying. In July, all-cash sales had a share of 23% of total sales, unchanged from May and June, but up from a share of 16% in July 2020. Cash buyers include institutional investors that can borrow at the institutional level, plus individual investors and second home buyers that have the cash, or can temporarily borrow against their portfolio and get a mortgage later.

For the past 15 months or so, the theory for homebuyers was to not sell the old home that is now vacant, and instead ride up the price gains of both homes all the way, and then sell the old home at the peak. That math has worked out. And some of those now vacant homes have come on the market, and more are likely to come on the market after Labor Day. Further price declines might put a sense urgency behind those potential sellers.

But buyers who need a mortgage fade. Mortgage applications to purchase a home in the week through August 18 has plunged 19% from the same week last year, according to data from the Mortgage Bankers Association. Compared to the same week in 2019, mortgage applications have been between flat and sharply lower on a year-over-year basis since early June – in other words, here too “normalization” or “deceleration” has set in despite record low mortgage rates (data via Investing.com): 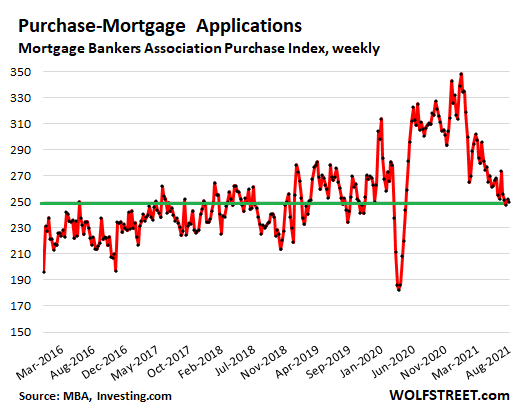