“Transitory” is the new Spandex.

For its measurement of its inflation target – the “symmetrical” 2% – the Fed uses the “core PCE” inflation measure because it is the lowest lowball inflation measure the government publishes, and it understates actual inflation even more than other indices. “Core PCE” excludes food and energy, which can be volatile but make up a big part of what people on the lower half of the income scale spend their money on.

And today, this lowball core PCE measure of inflation rose by 3.62% compared to a year ago, the hottest inflation reading since May 1991: 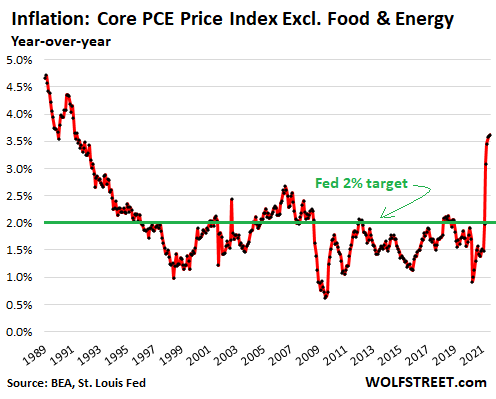 The PCE price index with food and energy included jumped by 0.4% for the month (4.8% annualized), and by 4.3% from a year ago. This is the hottest PCE inflation reading since January 1991: 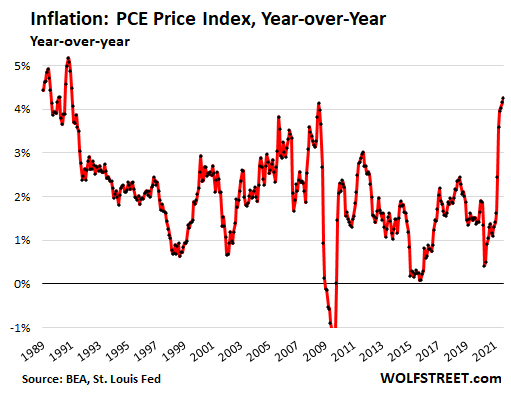 In the spring, the Fed brushed off the hot inflation readings with the meme that there were just “transitory” and would be gone by the end of the year. Now the story has changed. Now the Fed is getting comfortable with saying that “transitory” is going to last into mid or late 2022. Transitory is the new Spandex.

But the entire inflation scenario has changed. The cause is not a quickie supply chain disruption that’ll just go away. The cause is grotesquely overstimulated demand that has changed the entire inflationary mindset among businesses that are now confident that they can pass on higher costs and among consumers that suddenly don’t mind paying a lot more for stuff, when they would have previously gone on buyer’s strike, which would have prevented those price increases in the first place.

Fed Chair Jerome Powell did just that, admitting that inflation pressures would run into 2022 and blaming tangled-up supply chains but not what’s causing supply chains to get tangled up. Read… “Transitory” is the New Spandex: Powell Admits it, Still Denies its Cause. Why this Inflation Won’t Go Away on its Own