“Debt Ceiling Farce 2021”: S&P threatens to downgrade the US by 20 notches to “D” if it defaults, which would be a hoot.

Now they’re all out there warning our brinksmanship-meisters in Congress about the consequences of a US default – even just a “technical default” – if the debt ceiling isn’t raised or suspended. S&P told Reuters today that, if the US were to default on its debt, it would downgrade the US sovereign debt from “AA+” by 20 notches to “D” for default (for your amusement, my cheat sheet for bond credit ratings).

Treasury Secretary Janet Yellen, when asked in Congress today if the damage from a US default would be “irreparable,” responded with, “yes.”

Whatever the precise date, everyone agrees: If the debt ceiling isn’t raised or suspended, the US government is going to default.

So now we’re sitting on the edge of our collective chair, watching googly-eyed the ridiculous farce over the debt ceiling. What we’re watching is how close the government’s checking account balance will get to zero, the so-called X-Date.

In theory, when it hits zero, that’s when all heck breaks loose, and members of Congress could lose a big part of their wealth in no time, which is in practice why everyone knows for sure for sure that Congress will most certainly doubtlessly for sure raise or suspend the debt ceiling before that happens, as Congress has done 78 times since 1960, according to the Treasury Department. Financial self interest always wins with Congress, for sure for sure.

But folks are getting just a tad nervous. Suddenly, “what ifs” are cropping up. If the Treasury market is faced with non-payment of maturing Treasuries, including the vast repo markets, well, that would be a hoot.

The Fed is dusting off some old game plans on how to deal with it in order to keep the Treasury market, and the global financial system, from seizing up. And the big banks are trying to figure out how to keep the lights on in their empty offices if this happened.

The balance in the Treasury General Account at the Federal Reserve Bank of New York plunged by nearly $100 billion over the past seven days, to $174 billion, as of Wednesday evening, according to the Fed’s weekly balance sheet released this afternoon.

In mid-September, thanks to quarterly estimated tax payments, the TGA balance rose for one week, but not nearly enough.

You see where this is going: $174 billion isn’t much of a cushion when $100 billion flow out in a week, and the government is barred from borrowing new money: 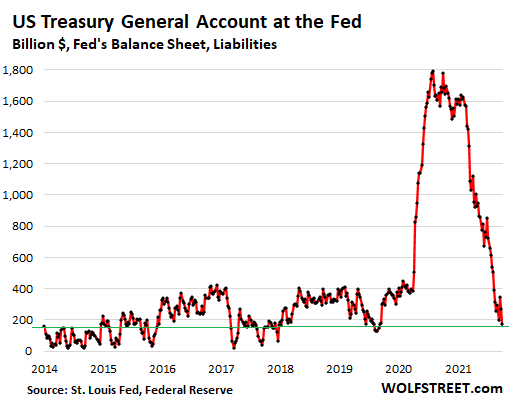 The TGA has been through some huge distortions. In the spring 2020, the Treasury Department issued $3 trillion in new debt to fund the tsunami of stimulus and bailout programs, but didn’t spend all of it, and the unused cash accumulated in the TGA. In January 2021, the Treasury Department began drawing down the TGA by reducing the amounts it borrowed to bring the account back to the normal range by summer.

Then the debt ceiling kicked in: The amount of the gross national debt outstanding on July 31, a monstrous $28.43 trillion, became the “debt ceiling” on August 1, that cannot be breached until Congress raises or suspends it.

It doesn’t accomplish anything. The debt ceiling never ever reduces deficit spending. That’s decided by Congress. It just puts a cap on new borrowing until the chokehold is released. The super-borrowing binge that invariably follows to fill the hole, and the unwinding of the all the “extraordinary measures” will cause me to write a headline, like, “US National Debt Spikes by $490 Billion in One Day,” or whatever. 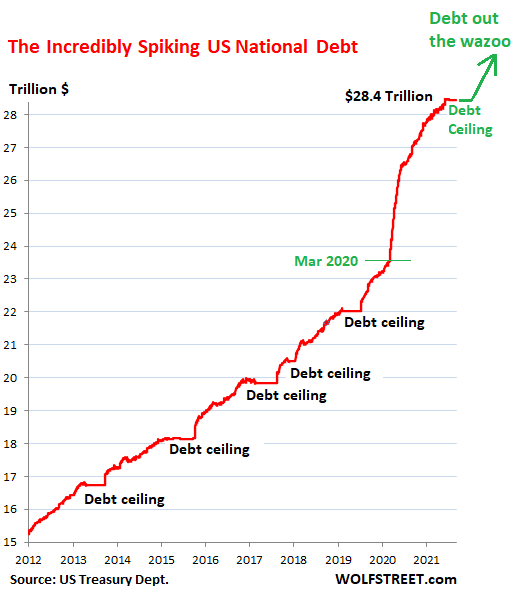 Among the side effects of the massive drawdown of the TGA, from $1.6 trillion in January to near zero in a week or two, is a tsunami of cash for the economy and markets.

This cash in the TGA was raised by the government via selling Treasury securities that the Fed gobbled up in the spring. And this cash just sat in the checking account until the government began drawing down the TGA earlier this year. It distributed this cash without having to borrow it. This was effectively a massive bout of delayed QE, which flooded the economy and markets with $1.4 trillion in cash so far this year.

A huge liquidity injection into the markets! And it helped boost asset prices.

That’s where the Fed’s overnight reverse repos (RRPs) came in. Under these contracts, the Fed offers Treasury securities in exchange for cash. The next business day, the deal unwinds, the Fed gets its securities back, and the counterparty gets its cash back. And then they make a new deal. Day after day, these deals unwind, and new deals are made.

The Fed started paying 0.05% (APR) on the cash it borrowed from the counterparties. This increased the use of the reverse repo facility and brought short-term yields above zero. And it has drawn ever larger amounts of cash.

This morning, the Fed took in a record $1.6 trillion in cash from 92 counterparties. Most of this is from money markets. But the amount was inflated by quarter-end window-dressing from banks that, for regulatory reasons, want to have less cash and more Treasury securities on their books. The last day of the quarter (today) provides the data for their quarterly balance sheet. Tomorrow, those RRPs with banks will unwind and the balance will drop somewhat. The end of December may produce an even bigger spike. And then as QE gets tapered out of existence, RRPs should start to calm down: 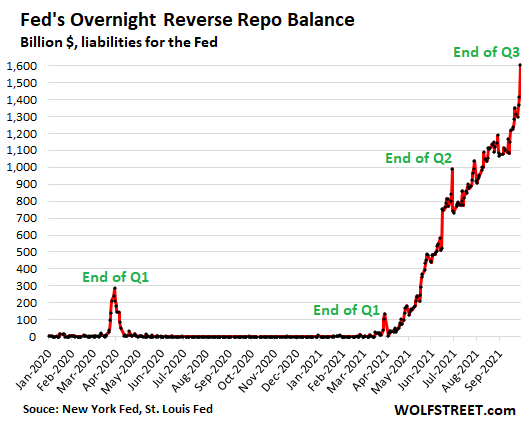 112 comments for “Treasury General Account Plunges by $100 Billion in One Week. How Close to Zero Will it Get?”