The decline of Dollar Hegemony. But other options are also shaky.

The global share of US-dollar-denominated exchange reserves – these are financial assets such as US Treasury securities, US corporate bonds, US mortgage-backed securities, etc., held by foreign central banks – declined to 59.2% in the second quarter, according to the IMF’s Composition of Official Foreign Exchange Reserves (COFER) data released today. In Q4 last year, the dollar’s share hit a 25-year low of 58.9%. And by the dreary looks of it, the dollar continues on its long, slow, uneven downward trajectory (2014 is the beginning of the quarterly data, prior data is annual): 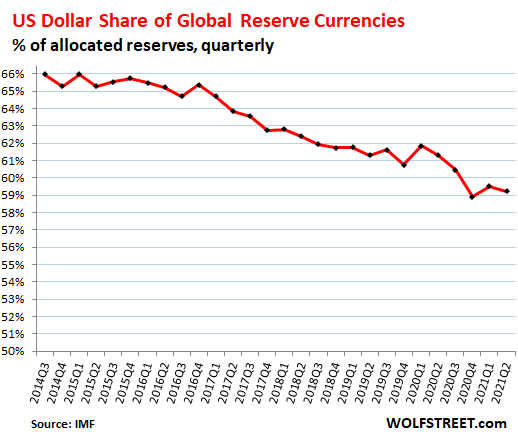 The Fed is a reckless money-printer, and the US government, which had binged on deficit spending for years, went hog-wild since March 2020. But the central banks and governments of other major developed economies have also been on this program, some even worse. And so, the pandemic didn’t shift the relationships around and left intact the long-term downward trajectory of the dollar as dominant reserve currency.

The arrival of the euro didn’t help the dollar: two decades of decline

In 2001, the dollar’s share of foreign exchange reserves ticked up to 71.5%, after which the last bout of the dollar’s long-term decline started. It’s also the period of the full-blown arrival of the euro. The dollars share has since then dropped by 12.3 percentage points, to 59.2% currently.

But there was a spectacular plunge in the dollars share of global reserve currencies that started in 1978 and bottomed out in 1991, reflecting years of massive inflation, during which the dollar lost about half its share. It then recovered until the euro came along (year-end % shares, except 2021 = Q2): 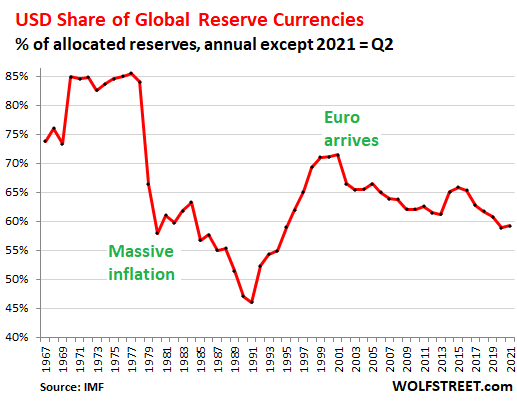 Exchange rates have something to do with it.

So the dollar’s share of total foreign exchange reserves depends to some extent on the exchange rates of those other currencies against the USD.

And exchange rates have fluctuated a lot. But since 1999, roughly the time span since the euro eased into existence, the Dollar Index (DXY), despite violent moves up and down, has barely changed.

And the long-term decline of the dollar’s share of global foreign exchange reserves over this time span isn’t attributable to exchange rates, but to central banks unloading dollar-denominated assets (data via YCharts): 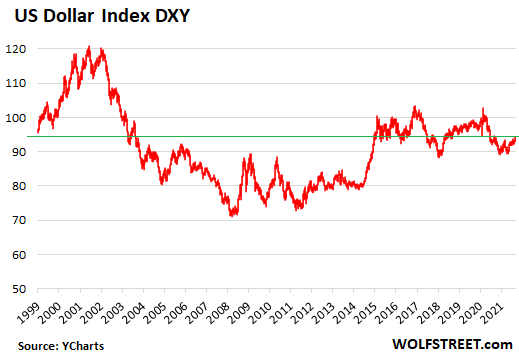 The dollar v. the euro v. the also-rans v. the Chinese RMB.

The euro share of global reserve currencies has been relatively stable in recent years at just over 20%. In Q2, it was 20.5%. It has been the second largest reserve currency throughout its existence. The fervent hopes in the early years of the euro for “parity” with the dollar were vigorously bashed during the euro debt crisis.

All other reserve currencies combined, including the Chinese renminbi, had a share of 20.2% in Q2. They’re the spaghetti at the bottom of the chart. The RMB, which became an official reserve currency in 2016, was supposed to blow the dollar away; it’s the short red line at the bottom: 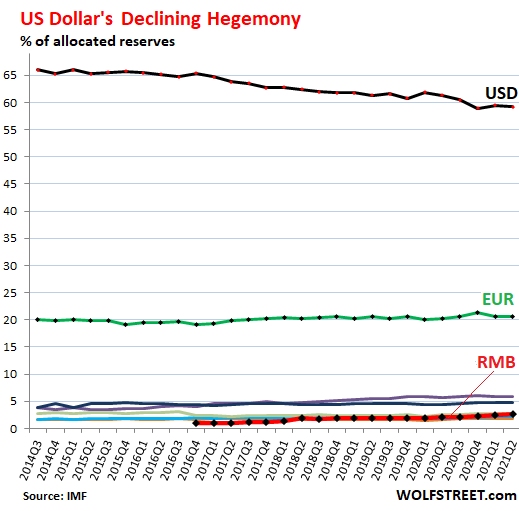 The chart below is a close-up of the also-rans, on their own, on a scale from 0% to 6%. In the group, the yen stands out because it gained considerable share over the past few years, to 5.8% currently. 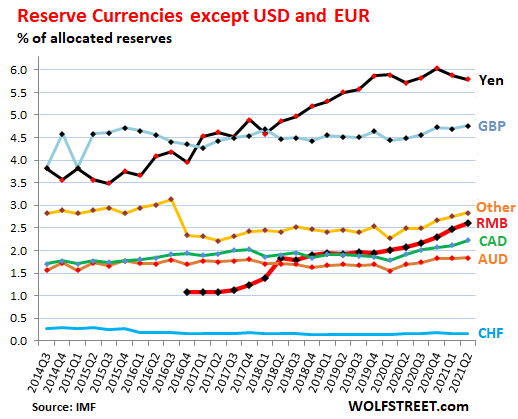 Note the rise of the RMB (red line) from around 1% when it first became a separately listed reserve currency in Q4 2016, and was removed from the “other” category whose share then dropped (yellow line).

Nearly five years after becoming an official reserve currency, the RMB’s share reached 2.6%. People who’d hoped the RMB would pull the rug out from under the dollar will have to be exceedingly patient.

The RMB became the fifth largest reserve currency in 2018 – behind the USD, EUR, YEN, and GBP – when it surpassed the Canadian dollar and the Australian dollar.

The very slow progress of the RMB, visible only under this type of magnifying glass, indicates that central banks around the world remain leery of the RMB – the only reserve currency that is still not fully convertible, further impeding its acceptance.