The Fed is getting nervous about inflation. “Temporary” doesn’t cut it anymore. And the bond market is getting a whiff of it.

The 10-year Treasury yield jumped 11 basis points today to 1.43% at the moment, the highest since early July, and the biggest jump since February. Apparently, it sank in today what the Fed had said yesterday afternoon. It placed the beginning of the Big Taper into November to be done with by mid-2022, which would then pave the way for rate hikes. Fed officials keep moving the first rate hike closer and closer. And they expressed their nervousness about the red-hot “temporary” inflation lasting a disturbingly long time.

Tapering the asset purchases and ending them in mid-2022 would remove the single biggest and most relentless buyer of Treasury securities, mortgage-backed securities, and Treasury Inflation Protected Securities (TIPS) from the bond market. QE was designed to push down long-term yields; and it did so with marvelous success. The end of QE is going to take that massive force off the market. 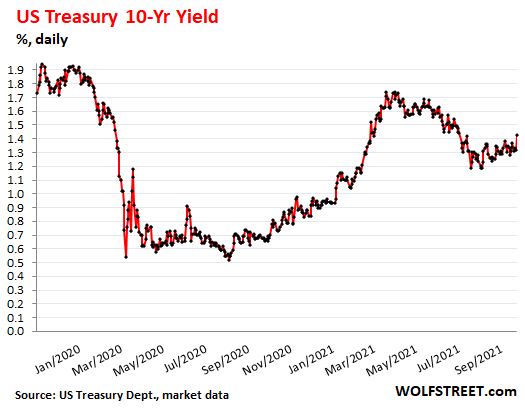 Bond yields rise as bond prices fall, so for holders of long-dated Treasuries, this was not a good day.

The short end of the Treasury spectrum – from the one-month yield to the two-year yield – was roughly unchanged, which is the area where the Fed effectively controls markets with its policy rates and trading activities, including the target range for the federal funds rate of 0% to 0.25%, its repo rate of 0.25%, its reverse repo rate of 0.05%, and its Interest On Excess Reserves (IOER) of 0.15%.

Over the past 12 months, the Fed officials’ median projections of inflation at the end of 2022, as measured by the lowest lowball index that the US has, core PCE, has steadily increased from 1.8% a year ago to yesterday’s median projection of 2.3%, the highest inflation projection since 2007. Core PCE inflation is currently 3.6%.

Fed officials have been saying that the “temporary” factors would recede by late this year and early next year, but these projections are for the end of 2022, long after the “temporary” elements have faded.

And there is a message in these projections: “Temporary” isn’t going to cut it anymore. There is durable inflation being figured into the equation now.

It’s clear that this Fed is getting nervous about inflation that has been spreading far up the supply chains, with companies paying higher prices and being able to pass on those higher prices to the next entity in line, and finally to consumers, for all to see.

The US has the highest consumer price inflation among major developed economies, with CPI-W for urban and clerical workers at 5.8% and CPI-U for all urban consumers at 5.3%. Producer price inflation is much hotter, indicating what is coming down the pipeline, with PPI Final Demand at 8.3%, and PPI Intermediate Demand in the double digits.

This inflation is occurring even as the Fed is still stomping with its iron boot on the insane accelerator, doing $120 billion a month in QE and repressing short-term interest rates to near 0%, with real yields now being negative for nearly everything except the riskiest junk bonds.

This is truly a crazy situation, and even the Fed is getting nervous about it.

They’re all worried about inflation getting out of hand, but none of these countries faces the type of red-hot inflation that the US is now afflicted with.

But the Fed is ever so reluctantly getting the memo that “temporary” doesn’t cut it anymore, that the enormous amounts of monetary and fiscal stimulus have created the most overstimulated economy ever, that has outrun supply, and that even if the Fed ends the stimulus now, the stimulus already washing through the system, including the ridiculously deeply negative real interest rates, will continue to push up inflation. And the bond market might have gotten just a whiff of it today.

170 comments for “10-Year Yield Jumps to 1.43% as Bond Market Reacts to what the Fed Said Yesterday about Tapering, Rate Hikes, and Inflation”