The Fed’s counterparties are always the primary dealers, but with reverse repos, the counterparties also include Government Sponsored Enterprises (such as Fannie Mae) and money market funds.

And these overnight reverse repos (RRP) are blowing through the roof. This morning, 77 counterparties handed the Fed a record $1.28 trillion in cash, in exchange for securities. These RRPs unwind the next day when the Fed gets its securities back and the counterparty gets its cash back. And then they engage in another overnight transaction of some other amount.

RRPs are essentially an interest-bearing overnight loan by the counterparties to the Fed – and they’re an indication of the gigantic amount of excess cash in the financial system, thanks to the Fed’s $4.6 trillion in money printing since March 2020: 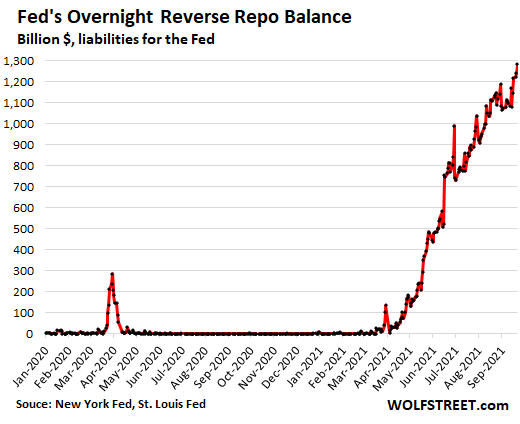 RRPs have the opposite effect of QE: With QE the Fed creates cash (credits) and buys securities with that cash. With these RRPs, the Fed sells (effectively, lends out) securities and for the term of the RRPs absorbs cash and removes that cash from the financial system.

These RRPs are a way for the Fed to drain massive amounts of cash from the system.

In June, the Fed raised the interest rate that it pays on RRPs from 0.0% to 0.05%. At the time, the yields of short-term Treasury bills were dipping into the negative, as too much cash in the financial system caused a mad scramble to find something to do with it.

The New York Fed, which does the overnight RRP trades, discloses the total balance and number of counterparties daily. But it does not disclose which specific counterparty it dealt with that day.

The government discloses the per-counterparty data on a monthly basis for balances at the end of the month. So we know, money market funds are the biggest users.

Part of the problem is QE: The Fed is still buying $120 billion in securities a month, after having already bought $4.6 trillion in 18 months, and thereby handing out $120 billion in cash that it created, which then piles on top of the cash that is already clogging up the financial system. RRPs are one way to tamp down on the enormous liquidity distortions that this gigantic amount of QE has unleashed.

The Fed should have stopped QE long ago and should be unwinding its balance sheet by now, and then this problem wouldn’t even exist.

Part of the problem is the drawdown of the Treasury General Account, the government’s checking account at the New York Fed.

Last spring, the federal government issued $3 trillion in new Treasury securities to fund the stimulus and bailout programs, but it didn’t spend it all. The unspent amounts remained in the TGA which peaked at $1.8 trillion in July 2020, when before the pandemic, it had generally run below $400 billion

When the Treasury department decided to draw down the TGA by borrowing less money, the government effectively started spending what turned out to be $1.4 trillion without having to borrow that $1.4 trillion, which effectively threw $1.4 trillion in additional liquidity that had been stuck in the TGA into the economy and market.

After receiving my personal and corporate quarterly tax payments on September 13, along with those tax payments of a few other entities, the TGA jumped by $144 billion, to $345 billion as of September 15. This will be drawn down as my tax payments are getting spent over the next few weeks: 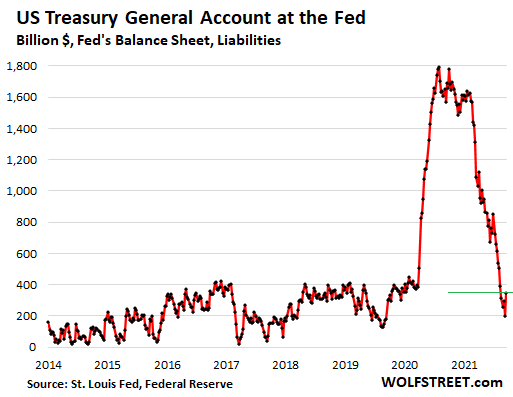 The purpose of the Fed’s RRP facility is to mop up the excess liquidity that the Fed has created. And it is doing that. But it works differently than if the Fed were to shed its QE assets as it had done from late 2017 through most of 2019. RRPs are overnight in-and-out transactions and affect short-term funding markets. With it, the Fed keeps short-term rate above 0%. Unwinding QE, would affect long-term yields across the credit markets, such are mortgages and 10-year yields.