Sales of single-family houses, condos, and co-ops fell by 2.0% in August from July, and by 1.5% from August last year, to a seasonally adjusted annual rate of 5.88 million homes, according to the National Association of Realtors today (historic data via YCharts): 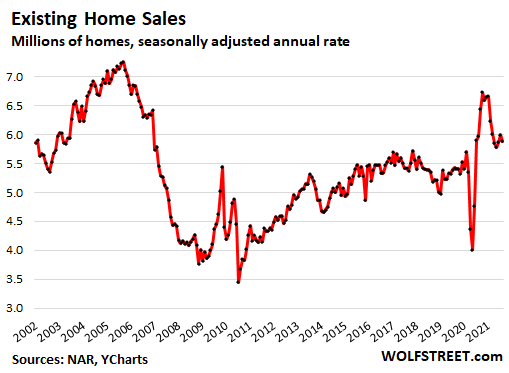 Sales of single-family houses fell 1.9% in August from July and by 2.8% from a year ago, the second month in a row of year-over-year declines, to a seasonally adjusted annual rate of 5.19 million houses (SAAR removes the effects of seasonality). House sales are now down by 14% from October last year.

The median price of existing homes fell for the second month in a row in August, not seasonally adjusted, to $356,700 for single-family houses, condos, and co-ops combined. This whittled down year-over-year price gains to 14.9%, down from a year-over-year gain of 23.6% during peak frenzy in May. 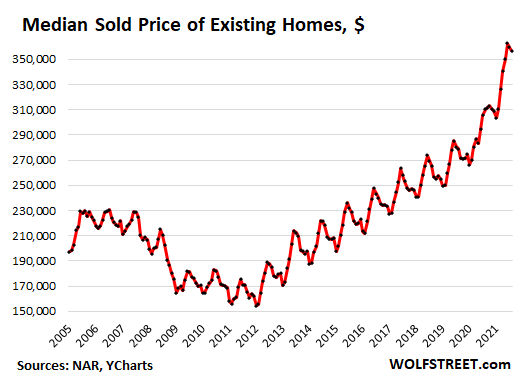 Price reductions increased for the sixth month in a row, jumping in August by 9.5% from July, after having plunged in 2020 and early 2021.

Seasonally, the first five months of the year are when price reductions are surging, and then taper off. This year, they barely ticked up in March and April but began surging in May. The 37% jump in July from June was the largest month-to-month increase in the data provided by realtor.com’s residential listings database. While price reductions are rising from still relatively low levels, they confirm the trend that sellers are facing more reluctant buyers and that “normalization” and “deceleration” are starting to set in. 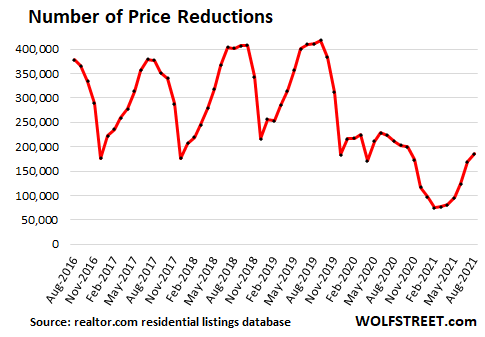 New listings, which normally peak in May and then drop sharply over the following seven months, have broken this seasonality during the pandemic. And now they’re breaking seasonality again: They rose through June, flattened in July, and barely dipped in August (data via realtor.com residential listings database; the Augusts are connected by a green line): 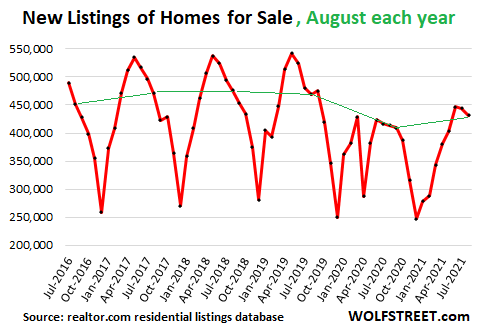 Supply of unsold homes on the market remained at 2.6 months, up from the low of 1.9 months in December and January. With 1.29 million homes (seasonally adjusted) listed for sale at the end of the month, inventory remains low (historic data via YCharts): 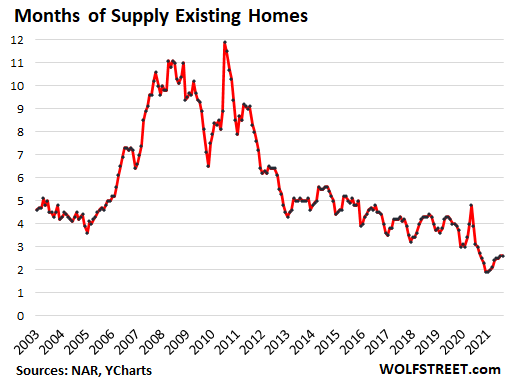 The share of all-cash sales dipped to 22% of total sales, from a 23% share in July, June, and May, according to the NAR. Cash buyers include institutional investors that can borrow at the institutional level, plus individual investors and second home buyers that have the cash, or can temporarily borrow against their portfolio and get a mortgage later.

The share of sales to individual investors and second-home buyers remained flat at 15% in August, compared to July, and was roughly flat with August last year.

But now the Fed is talking about ending QE and raising its short-term rates. The Fed will likely start reducing its asset purchases “soon,” as it said today, which likely means later this year, and end those asset purchases entirely by sometime next year.