Pay More, Get Less. Spending on durable goods after inflation down 10% from historic spike. But services surged, pointing to next source of inflation.

The fly in the ointment of the most monstrously overstimulated economy ever is, it turns out, duh, inflation which is now eating into what Americans earn, and what they spend, though they’re making heroic efforts to spend.

Before inflation, personal income from all sources rose by 2.7% in July compared to a year ago, and by 1.1% for the month, to a seasonally adjusted annual rate of $17.8 trillion, according to the Bureau of Economic Analysis on Friday. This includes income from wages, stimulus payments, transfer payments (unemployment compensation, Social Security benefits, etc.), and income from other sources such as interest, dividends, and rental income.

After inflation, “real” personal income fell by 1.4% from a year ago, despite the 0.7% increase in July from June. The three spikes in the chart are a result of the three waves of stimulus payments on top of all the other layers of money that were handed out and triggered some of the biggest distortions in consumer spending ever: 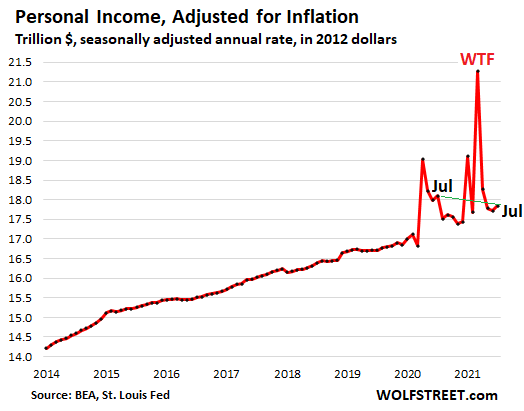 Without transfer payments, inflation-adjusted personal income rose 3.8% year-over-year. This is income from labor, interest, dividends, rental property, etc. – but without stimulus payments, unemployment payments, and other transfer payments from the government. It’s a function of the larger number of people who are working, higher wages, and higher incomes from rental properties, dividends, interest, etc., and adjusted for the effects of inflation.

But it has hardly improved at all since last October and is still below the peak in February 2020 because inflation has been eating it up. The green line represents the pre-pandemic trend: 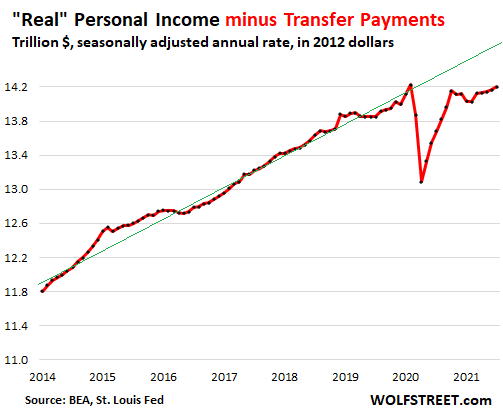 Before inflation, consumer spending rose 0.3% for the month to a seasonally adjusted annual rate of $15.8 trillion.

After inflation, consumer spending fell 0.1% in July, and was back at March level, as people spent heroically, but inflation ate all the growth plus some. “Real” consumer spending hasn’t really moved since the stimulus powered spike in March. But these are still huge amounts that consumers spent, as they’re still flush with all the free money they got from the myriad of stimulus efforts by the government and the Fed: 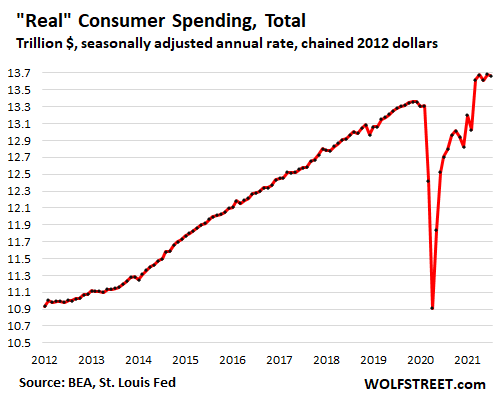 Spending continued to shift to services. “Real” spending on services rose 0.6% in July from June and was up 7.6% year-over-year. But it remains 3.1% below pre-pandemic levels. Services accounted for 60% of total spending in July. Before the pandemic, it accounted for about 65% of total spending. But last year, consumers shifted their spending patterns from services to goods, and that shift is now reversing: 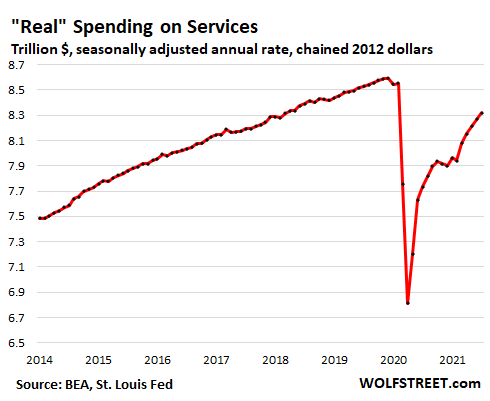 “Real” spending on durable goods fell another 2.6% in July, the fourth month in a row of declines, and fell below the level in January, after the stimulus-fueled binge in March and April. Since the peak in March, it has dropped nearly 10%.

But consumers are still spending heroic amounts of money on durable goods, compared to pre-pandemic times, though they’re struggling with shortages of all kinds and surging prices, and some consumers are starting to lose their appetite for these prices, such as for used vehicles, and have decided to wait it out: 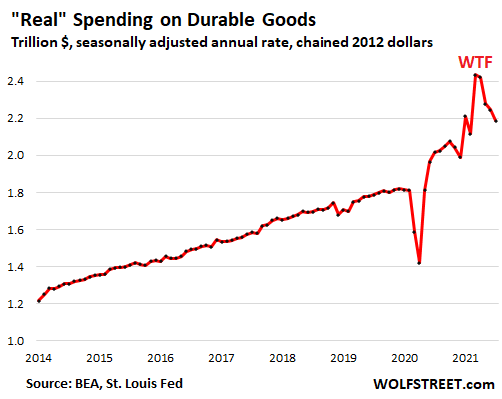 “Real” spending on nondurable goods fell 0.9% in July from June, and is now below the March level, but these are still huge amounts consumers are spending.

Nondurable goods are mostly food, drinks, other household goods of the type sold in supermarkets – among the big winners of the shift to working from home – and gasoline. And people are driving for vacation (buying gasoline) instead of flying (buying a service), and gasoline consumption over the 4th of July week hit a record high, amid surging gasoline prices: 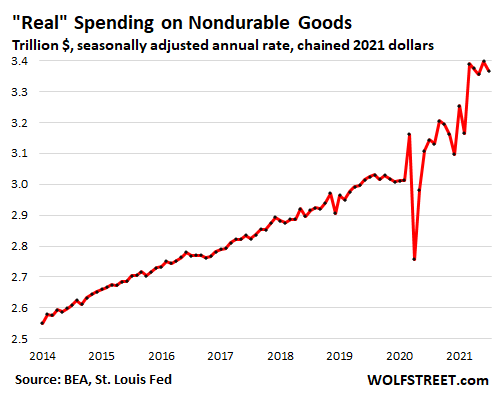 The continued sharp increase in spending on services, after they’d gotten hammered last year, points at the next source of inflation pressures. Services dominate consumer spending, unlike durable goods such as used vehicles, sofas, or electronics, and they weigh much more in the inflation indices, and as prices of services begin to rise, they will impact overall inflation and core inflation measures much more than durable goods.

151 comments for “Flush with Free Money, Americans Spent Heroic Amounts, but Inflation Ate it Up”