Vacationing by car instead of going overseas, working from home instead of commuting, and to heck with mass transit.

Total miles driven by all types of passenger and commercial vehicles, including over-the-road trucks and local delivery vehicles, in June, on all roads and streets in the US rose to 282.5 billion miles, the highest since October 2019, and just a tad below June 2019, according to the Federal Highway Administration this week. In other words, total miles driven are now roughly back where they were before the pandemic. 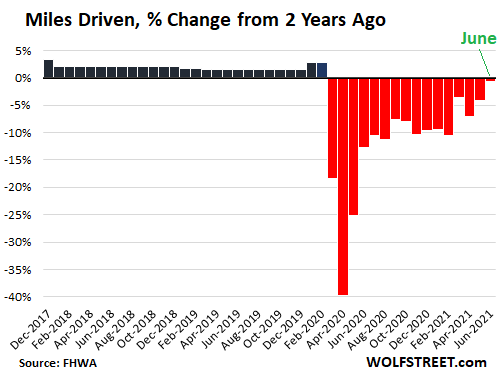 But beneath the surface, there have been some shifts that reflect the shifts many Americans have embarked on, including the shift to working from home, and thus less urban driving, and the shift to vacationing within the US, rather than to foreign destinations, and much of it by car, and thus an increase in driving through rural areas, such as on Interstate Highways and scenic byways.

In urban areas – on urban Interstates, arterial streets, and regular streets – Americans drove 193.4 billion miles in June, still down by just under 1% from June 2019 and June 2018 (red line in the chart below).

These 193.4 billion miles of urban driving in June accounted for 68.4% of total miles driven.

In rural areas – rural Interstates, other rural highways, and roads – in June, Americans drove 89.2 billion miles, up over 2% from June 2019 and June 2018 (green line). June was the first month when miles driven in rural areas exceeded the pre-pandemic levels. Note how urban and rural miles driven used to grow at roughly the same rate through February 2020. But during the recovery, they diverged. 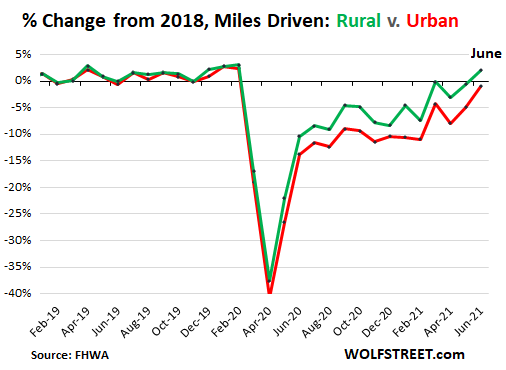 The shifts in urban miles.

People who’ve shifted to working from home for at least some of the working days drive less in urban areas.

Transit systems all over the country are still reporting drastically reduced ridership on their buses, trains, and ferries – in contrast to road congestion, which is nearly back to where it was before, and in some places worse than it was before.

In the San Francisco Bay Area, the Bay Area Rapid Transit (BART) system — a rail service that connects some of the major cities in the Bay Area to San Francisco — reported that in July, ridership was still down by 77.6% from July 2019, with 2.2 million passengers using the system, down from over 10 million in July 2019. Ridership was up from the pandemic lows but remains minuscule – despite brand-spanking new trains now being phased in. 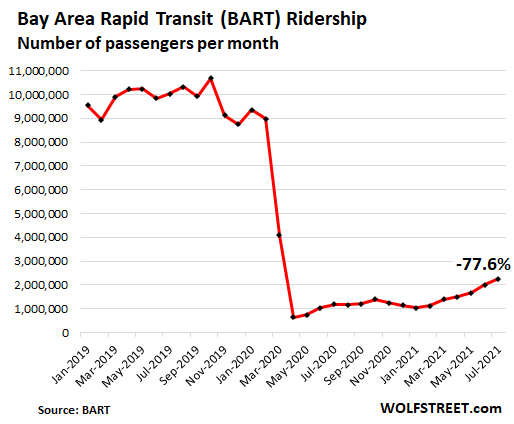 A couple of weeks ago, I reported that weekly gasoline consumption in the first week of July – covering the 4th of July weekend – had hit an all-time high for any week, and that over the weeks surrounding the weekend, gasoline consumption was only slightly below the same period in 2019. In other words, based on gasoline consumption, the amount Americans drive has nearly fully recovered.

Gasoline consumption does not cover driving by vehicles with diesel engines, and therefore does not include trucks and other diesel-powered vehicles, though it includes gasoline-powered delivery vehicles. So gasoline consumption focuses on consumers’ driving patterns, and excludes much of the trucking activity.

On the other hand, gasoline consumption excludes driving by EVs. In cities in California, EVs are starting to be a noticeable part of the fleet. But nationwide – which is what we’re looking at here – EVs make up only a small part of the national fleet.

The fact that gasoline consumption set a new record over the holiday week in early July shows that shift toward driving vacations.

The growth of miles driven in rural areas confirms this.

It may not be a newly rediscovered passion. It’s just that Americans cannot easily fly to Thailand or India or Europe for vacations, or they could but don’t want to deal with the hassles and risks, and instead they drive around the US, which is a great thing. In normal times, tourists come from all over the world to see the wonders of America, such as the National Parks. Now these places are packed with Americans.

119 comments for “Driving in America Changed: Rural is Up, Urban Down, Mass Transit Out”