One of the inflation measures released today, in addition to the regular Consumer Price Index data, was the CPI-W which is used to figure the Cost of Living Adjustment (COLA) for Social Security benefits.

The COLA is based on the average percentage increase of CPI-W in the third quarter compared to the same period in the prior year. So today’s report for July, figured by the Bureau of Labor Statistics and released by the Social Security Administration, covers the first month of the three months that will determine the Social Security COLA applied to benefits paid in the year starting in January 2022. 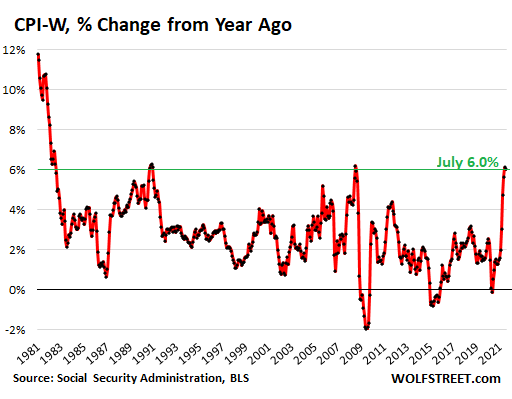 The average year-over-year increase of July, August, and September will determine the COLA applied to Social Security benefits paid in 2022.

Using these estimates for August and September, it would produce the highest Social Security COLA since 1982 (7.4%). In recent memory, the highest COLA was 5.8% in 2009. The September value of CPI-W, to be released in about two months, will allow us to predict with some accuracy the COLA for 2022. 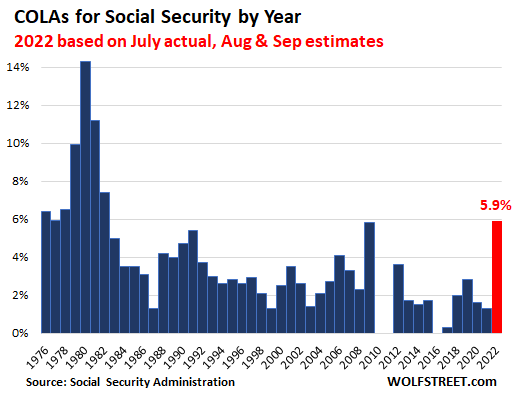 A COLA of around 6% might sound exciting, but given the extent to which prices are rising, 6% might not even get close to making up for actual cost increases, depending on the personal situation of the beneficiary.

If you get hit with a 10% rent increase, and the price of gasoline jumps another 30%, and the stuff you buy at the supermarket is up 8%, then the COLA won’t be nearly enough. In other situations, you might fare better.

But given how suppressed housing costs and new and used vehicle costs and other costs are in the regular CPI (which I discuss here), these COLAs over time will not compensate for the actual increases in the costs of maintaining the current standard of living. This is why it’s super important to have a nest egg with at least some assets to supplement Social Security.

And having a fun and exciting gig for as long as possible that generates income is a huge benefit – for all kinds of reasons, not just money, or maybe least of all money. I mean, look at all the old politicians: They’re having a total blast. They get to be on TV, give speeches, and play beach volleyball with trillions of dollars, and get paid to do it. Way to go!