Some disruptions are “transitory,” but the spiral that the mix of ongoing over-stimulation has set off is anything but “transitory.”

There is already enough shipping chaos, logjams, container port congestion, rail terminal congestion, container shortages, delays of all kinds, along with various shortages, including the semiconductor shortage that has wreaked havoc in the auto industry and consumer electronics, amid surging consumer prices and exploding transportation costs across the spectrum as an overstimulated economy is grappling with a supply chain nightmare.

And now China has suspended operations at the newly built Meishan container terminal at Ningbo-Zhoushan port, China’s second busiest port after Shanghai. The mega-terminal accounts for about 25% of the port’s traffic.

After a worker at the Meishan terminal had tested positive for Covid, Chinese authorities suspended all inbound and outbound container services at the terminal on Wednesday until further notice due to a “system disruption,” according to a statement from the port, cited by Bloomberg.

Other container traffic at the Ningbo-Zhoushan port will likely also slow as the port will now only accept containers within two days of a ship’s estimated arrival time, according to a statement from container carrier CMA CGM, cited by Bloomberg.

This shutdown comes as peak shipping season approaches when retailers in the US and elsewhere attempt to line up merchandise – much of it imported from Asia – for the holiday selling season.

This is the second major port disruption in three months in China. In late May, Yantian International Container Terminals in Shenzhen stopped accepting containers due to a Covid infection among port workers. The port then operated at 30% capacity for about a month.

Container ships balled up off Shenzhen and Hong Kong, waiting to pick up containers bound for North America, Europe, and other parts of the world, causing all kinds of disruptions in China’s factories and supply chain headaches overseas. Even when the port resumed normal operations, it took weeks to work through the backlog and stacked containers.

These types of supply-chain disruptions and transportation nightmares have been piling up from all directions and are bound to drive up end-user prices further.

In the US, where consumer price inflation is now surging at the hottest rate in years, input prices for companies have exploded, which will further transfer into consumer prices down the road.

The Producer Price Index for final demand, which is an indication of input price pressures that companies face, and that they’re trying to pass on to their customers, spiked by 1.0% in July from June and by 7.8% year-over-year, according to the Bureau of Labor Statistics today, by far the highest rate in the data going back to 2010: 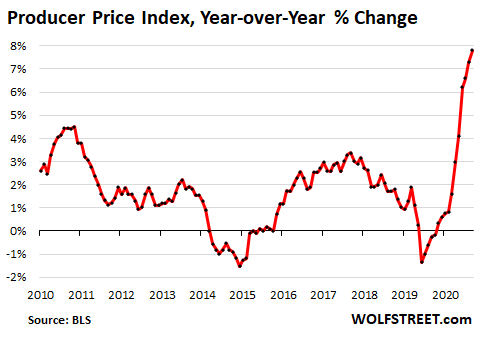 And the ocean freight rates charged to ship containers across the world have exploded. Drewry’s composite World Container Index in the latest week, reported today, rose to $9,421 per 40-foot container, up by 358% year-over-year (chart via Drewry): 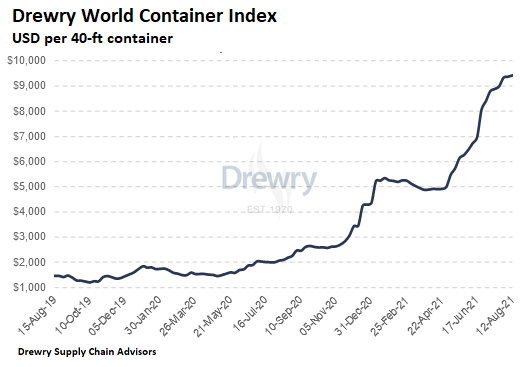 Specifically, rates to ship a 40-foot container in the week through August 12 from Shanghai to:

These are astounding freight rates – to be passed on to consumer just for the holiday season. Makes you wonder if the big container carriers aren’t engaging in some classic price gouging. Why? Because they can. That’s what inflation is all about: Companies get away with raising their prices whatever the reasons may be. And those higher prices become costs for the next company, and they get passed on further.

Shipping costs within the US have also soared. The Index of Inferred Freight Rates by the Cass Freight Index, which covers all modes of transportation soared by 23.8% ear-over-year, the biggest jump in the index going back to 2009, showing “broad and material increases in freight rates across modes,” according to Cass. Within the index, truckload accounts for over half of the dollar volume, followed by rail, LTL (less than truckload), parcel, etc. 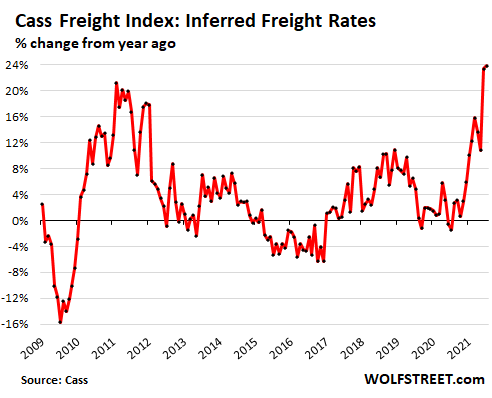 These pressures in the supply chain and transportation systems that make supply chains work didn’t come out of nowhere. They came from a hyper stimulated economy, to a large extent in the US, where the government and the Fed threw many trillions of dollars in all directions that then needed a place to go. And some of it ended up getting spent on goods that are mostly manufactured overseas.

This mix contributed to the beginning of an inflation spiral. While some of the issues will eventually be resolved, these higher prices have led to higher wages that are now further pushing up prices, and companies are raising prices to deal with higher wages and higher input costs, and there are all kinds of signs that the whole cycle is anything but “transitory,” especially with the massive fiscal and monetary stimulus still raging – under these conditions!