Frustrated by lack of choice and puffed-up prices, many customers walked.

There are now tens of thousands of newly built vehicles parked all over the place that are mostly finished but are still awaiting a microchip or a component that couldn’t be delivered to the assembly plant due to the semiconductor shortage. These unfinished vehicles are drivable but not salable.

In July, it emerged that Ford had plans to send unfinished F-series trucks to its dealers on an opt-in basis, and let them sit on their lots – rather than on rented storage lots – until the chips or components catch up, and are sent to the dealers that can then install them, and then sell the finished vehicles.

Over the past few months, salable inventory of new vehicles on dealer lots has thinned out to record low levels. Manufacturers have prioritized building models with the biggest price tags and fattest profit margins to pump up their dollar-revenues and earnings despite much lower unit sales.

Customers are swarming over vehicles when they come off the convoy at the dealer, or they’re ordering and waiting more or less patiently. And many costumers, frustrated by the high price tags and lack of choice, are walking, and sales volume has plunged over the past three months – the beginnings of a buyers’ strike.

In July, total car, truck, and SUV sales fell for the third month in a row, to 1.29 million vehicles, according to the Bureau of Economic Analysis today.

The industry-standard Seasonally Adjusted Annual Rate (SAAR) of sales, which takes the number of selling days per month into account, along with other seasonal factors, and then extrapolates the monthly sales to what they would amount to for an entire year, plunged by 13.4% from the same period in 2019, to 14.75 million SAAR, the lowest, beyond the lockdowns, since October 2012, coming out of the Great Recession: 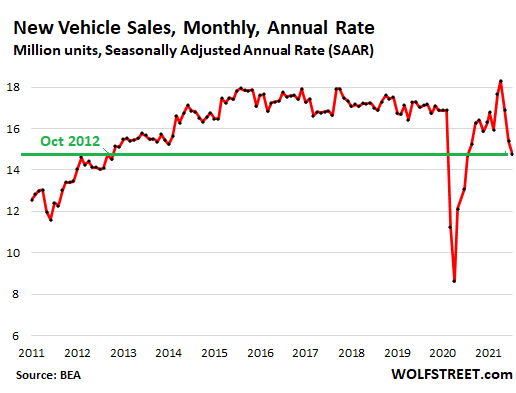 Sales to retail customers accounted for a very high 90% of total sales as automakers prioritized building high-profit margin vehicles for the retail market rather than selling units at low margin to rental fleets.

Ford is an example at the more troubled end of the spectrum. It announced today that in July deliveries to end users plunged by 32% year-over-year, to 120,053 vehicles – thanks to the semiconductor shortage, resulting in component shortages, resulting in plant closings and mega-lots full of unfinished vehicles.

Deliveries by its dealers to retail customers collapsed by 38%. Deliveries to fleet customers had totally collapsed in 2020 as the rental fleets had stopped ordering, with two of them – Hertz and Advantage – filing for bankruptcy. And anything is progress from there.

Car sales were down to just 4,124 Mustangs, 19 GTs (Ford’s fancy rear-engine supercar), and 124 leftover Fusions still sitting on dealer lots after having gone out of production. Except for the Mustang, Ford has handed its car business to foreign automakers.

Combined with the stimulus-fueled strong sales of new vehicles in March, April, and May this year, these forced production cutbacks led to a historic depletion of inventories on dealer lots.

Under these conditions, customers had to buy what was there, and they couldn’t pick the color or trim package, and often not even the model, and pricing on popular models was take-it-or-leave-it – and in many cases, according to numerous reports, above MSRP.

Customers ended up buying something they hadn’t planned on buying, and paid more than ever imagined, and dealers made record per-vehicle gross profits in making this happen, and automakers, that had slashed their incentives further in July, were laughing all the way to the bank.

But other potential customers, frustrated by the lack of choice and the mega-price tags, didn’t buy at all, and walked out, which is what increasingly happened in July – which resulted in the plunge in vehicle sales to 2012 levels. It’s the timid beginnings of a buyers’ strike.

Plant closing announcements are continuing, and those production halts will dog the automakers going forward. The semiconductor shortage, which early this year was expected to be over with later this year, is now expected to last into 2022, and some voices already put 2023 on the table.

Buying a vehicle is the ultimate discretionary purchase for most people. They can drive what they have for another year or two or three, and they have proven that they can do this during various multi-year sales collapses, including during the Great Recession during which GM and Chrysler collapsed into bankruptcy, along with a slew of component makers, and new vehicle sales didn’t recover until 2015.

But this type of brutal buyers’ strike isn’t happening yet. What is happening now is just a timid reaction to the frustrations of not being able to buy what they want at a reasonable price.