In an economy screaming for labor, the data is becoming clearer, despite breathless media coverage to the contrary.

OK, it’s complicated, as they say, and the weekly unemployment claims data were never designed to be used as precision tracking tool. But it is important. So we’ll take a careful look to get beyond the noise.

Turns out, despite breathless media coverage to the contrary, ending the extra federal $300 a week in unemployment benefits, as over half the states have already done, is indeed encouraging more people to go back to work – in an economy that is screaming for labor.

For the US overall, “insured unemployment” or “continued claims” (number of people having claimed unemployment insurance for more than a week) dropped to 2.88 million in the current week, according to the Department of Labor this morning. It was the lowest since the employment crisis began in March 2020.

At the state-by-state level, “continued claims” can serve as a stand-in to find out if ending the extra $300 a week in federal benefits is encouraging people to go back to work.

To get beyond the noise…

Across the states there are large ups-and-downs from week to week, depending on how claims are processed and reported. But when it happens in the big states, it moves the national needle.

For example, in the reporting week ended July 24, continued claims in California jumped by 16% to 833,426. But in the following week, which was reported today, continued claims plunged by 30% to 577,056. Yet the labor market in California hasn’t changed much over those two weeks. The unevenness of processing and reporting the weekly claims causes this. It’s just noise.

The typical time lag between starting to look for a job and the first day of work further delays the impact on unemployment benefits. But the first signs likely started cropping up in the “insured unemployment” data sometime after the reporting week through July 3.

The beginnings of a trend.

In other words, 108,000 more people returned to work in states that ended the federal $300 a week (green) than in states that kept the extra $300 a week (red). Over the past two weeks, “continued claims” among the Enders dropped at a fairly sharp rate of 5.6% and 2.7% week-over-week: 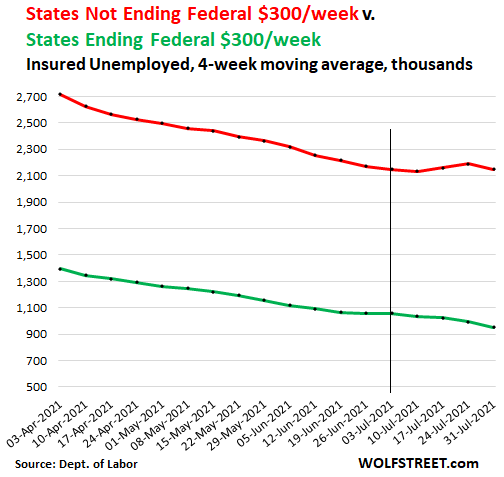 Companies that have been clamoring to hire workers are feverishly waiting for these weeks in September to come around when they hope their search for labor to fill job openings will be met with greater interest. And today’s data indicates that many people, once the federal benefits run out, will indeed begin to rejoin the labor force.

108 comments for “Yes, More People Went Back to Work in States that Ended the $300/Week in Federal Unemployment Benefits”