His “taper” discussion — tapering starts this year — got all the attention, but his focus was on inflation.

“Core PCE,” which excludes food and energy that can be volatile, but which people spend a lot of money on, rose by 0.34% in July from June, and by 3.62% year-over-year (up from 3.58% increase in June), for the largest year-over-year increase since 1991, according to the Bureau of Economic Analysis today. 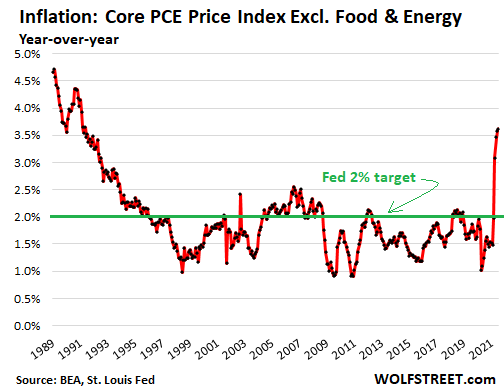 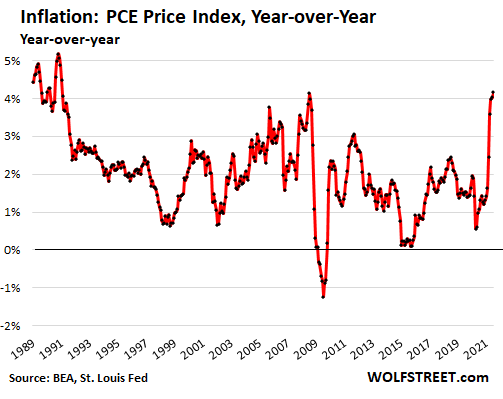 By now it is clear to everyone at the Fed, even Fed Chair Jerome Powell, that inflation has arrived in a massive manner not seen in decades, even while the Fed is still stimulating inflation with its interest rate repression and $120 billion of QE a month, and even while the $5 trillion of government deficit spending over the past 17 months are still flooding the economy.

Powell, in his virtual Jackson Hole speech today was all over inflation. He mentioned it 71 times in the written speech (not including the references). He pointed out why inflation has spiked so enormously in durable goods: a historic spike in stimulus-fueled demand that no one was ready for.

And some of those price spikes, such as the ridiculous price spikes in used vehicles, are surely in part temporary because these prices are just too outlandish to persist. And when those prices tick down, they pull down the inflation index. But those price spikes will unwind only partially, depending on how aggressively “hedonic quality adjustments” are being applied going forward.

Meanwhile, even as used vehicle prices might begin to tick down, along with some other prices, new vehicle prices and numerous other prices have started to take off, particularly in services, which are roughly two-thirds of consumer spending and include housing.

These shifting price increases and decreases make inflation readings very volatile, and just when you thought inflation would finally fade, there comes another surge.

Powell alluded to that. He sees this inflation spike “moderating in higher-inflation items.” But he referred back to the 1970s, when two oil shocks caused spikes in inflation that then spread to other items and became entrenched and persistent and self-propagating, even after the oil shocks had dissipated.

“History also teaches, however, that central banks cannot take for granted that inflation due to transitory factors will fade. The 1970s saw two periods in which there were large increases in energy and food prices, raising headline inflation for a time,” he said.

“But when the direct effects on headline inflation eased, core inflation continued to run persistently higher than before,” he said.

“One likely contributing factor was that the public had come to generally expect higher inflation – one reason why we now monitor inflation expectations so carefully,” he said.

The inflation spiral in the 1970s took nearly a decade before it finally turned the corner, after hitting 14.5% as the economy was getting hit with mega-rate hikes to get inflation under control.

In between, there were many moments when inflation was thought to have peaked, and when inflation backed off, only to spike again and more so than before. But back then, interest rates were much higher than today, and there was no QE.

Now the Fed is still printing $120 billion a month, which is totally crazy given this amount of inflation, though it will taper those purchases starting this year, as Powell confirmed, and down to nothing by some time next year; and it is still repressing interest rates, with short-term rates near zero. This combo of massive QE, repressed interest rates, huge government stimulus, and raging inflation is new in recent history.