In these wondrous credit markets were everything is now completely out of whack, the first thing that happened, after the freak show of CPI inflation hitting 5.0%, was that junk-bond yields fell to new record lows. Even the average yield of B-rated junk bonds – considered “highly speculative,” per my cheat sheet of corporate bond credit ratings – dropped below the rate of CPI. When bond yields drop, bond prices rise, and a good time was had by all.

The average yield of CCC-and-below-rated bonds – ranging from “extremely speculative” to “default is imminent with little prospect for recovery” – dropped to a new record low of 6.83% as of the close yesterday, as investors apparently don’t mind exposing their capital to the massive credit risks offered up by CCC-and-below-rated junk bonds, for a “real yield” (adjusted for CPI inflation) of just 1.83%. 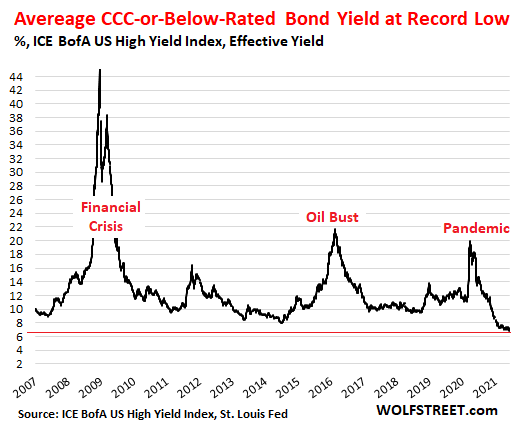 Those CCC-and-below-rated bonds are the only category in the US corporate bond spectrum whose average yield is above the rate of inflation.

Everything else has negative real yields, where the purchasing power of capital is being destroyed by inflation, while yields are too low to compensate for that loss of purchasing power. And there is nothing, zilch, nada in terms of compensation for the substantial risk of default and getting mostly wiped out during a debt restructuring.

Even if CPI inflation, after averaging maybe 5% this year, comes back down next year, as the Fed keeps promising, the purchasing power of the capital plowed into these bonds would be reduced by 5% for the year, and the yield from those bonds purchased at today’s prices would be below that, and the investor would be in the hole in real terms. And that doesn’t even consider the risks of default:

So, on average, these are very unappetizing substances, except perhaps for leveraged short-term speculators who bet on yields to drop even further, despite the surge in inflation, and who could then sell the bonds for more (when yields drop, bond prices rise) to the greater fool down the road.

But long-term investors – bond funds, pension funds, or insurance companies – buy bonds to hold them, usually to maturity. And those junk bonds at these yields today, given the credit risks of the companies that have issued them, are a shitty deal even if CPI inflation were at 2% for the remainder of their maturity.

But now inflation has been unleashed. The Fed is officially surprised by how fast it jumped, having totally underestimated this in their earlier pronouncements. And they’re still saying it’s just temporary, it’ll pass next year. And if it doesn’t pass next year, and if inflation doesn’t magically go back to 2%, then the Fed will act surprised again.

The yield from interest payments is supposed to compensate investors for that loss of purchasing power, and also for the risk of default – where they could lose much or all of their capital. But investors aren’t getting compensated for hardly anything.

What it has come down to is this: In the Fed-engineered out-of-whack credit markets that are drowning in a sea of Fed-created cash that is now causing all kinds of issues in the banking system, the Fed is trying to control it with it via overnight reverse repos, while investors are trying to find a place to put this cash, and some accept zero yields or negative yields in the repo market, while others are vigorously chasing yield wherever they can find it regardless of the risks.

With so much excess cash floating around, what else are investors supposed to do with their cash – even as inflation is eating it up on a daily basis? That was a rhetorical question. Everyone is trying to find a place for it, but all assets are already overpriced, and yields are already repressed below the rate of inflation for most bonds, in markets that have aptly been described as “raging mania.”