Investors in subprime auto-loan Asset Backed Securities should be genuflecting in front of US taxpayers to thank them for the backdoor bailout.

Subprime auto loans are risky but very profitable because they carry high interest rates, even in these times of crazy-low interest rates. Much of the risk is shuffled off to investors by securitizing these loans into subprime auto-loan Asset Backed Securities (ABS), that are cut into tranches, ranging from the highest credit rating that take the last loss but get the lowest yields, to the lowest-rated tranches that take the first losses, but get the highest yields. So there is something for everyone.

Repossessions of vehicles are generally easy and fast, and there are not a lot of hoops to jump through, and there is a very liquid auction market to dispose of the vehicles efficiently. Professional repo firms get the vehicle, clean it up, and take it to the auction. For subprime lenders this is all pretty slick.

So subprime auto-loan delinquencies of 60 days and over that had been securitized into ABS and were rated by Fitch had been rising for years as lenders were taking ever more risks, amid a voracious appetite among institutional investors for subprime auto-loan ABS. By 2016, the 60-plus days delinquency rate blew past the highs during the Financial Crisis. In August 2019, it matched the spike of October 1996, the worst in the data. And in January and February 2020, the delinquency rate blew by the worst Januarys and Februarys ever. So this was going in the wrong direction. And then came the stimmies. 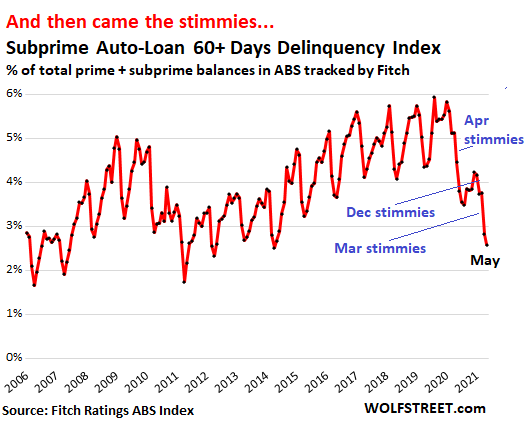 In May 2021, the 60-plus day delinquency rate of subprime auto-loan ABS dropped to 2.58% of total auto loans (“prime” and “subprime” combined), according to Fitch Ratings. This was the lowest rate since 2012, when delinquencies dropped because by then the delinquent loans from 2009 through 2011 had been written off and cleared out of the system, and lenders had become circumspect with new loans.

Fitch’s ABS delinquency index for “prime” auto loans, which had remained below 1% even during the financial crisis, dropped in May to a historic low of 0.14%.

Clearly, the stimmies had been used in part to catch up on past-due auto loans. And this didn’t particularly help the economy, or jobs, or whatever, but it bailed out the lenders and investors that might otherwise have seen big losses on their subprime loans and ABS.

So that pension fund in Texas, California, or Norway, and their beneficiaries, should be genuflecting in front of the stimmies, and in front of US taxpayers that paid for this backdoor bailout.

But at the same time, auto buyers with subprime credit scores – below 620 – have stayed away from buying a vehicle, perhaps deterred by the crazy new and used vehicle price increases, or perhaps because they still hadn’t gotten a job.

According to the New York Fed’s Household Debt and Credit Report, the share of subprime-rated loans and leases being originated in Q1 2020 dropped to 15.3% by loan amounts, the lowest level in the data going back to 2004, another confirmation of the K-shaped recovery: 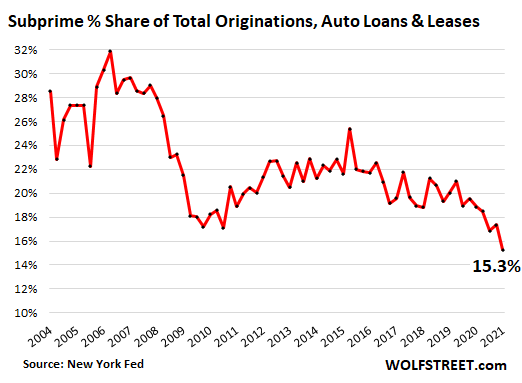 At the end of Q1, there were $1.38 trillion in auto loans and leases outstanding, up by 2.7% from a year earlier, the smallest year-over-year growth since 2011, despite massive price increases of new and used vehicles, which should have driven up loan amounts. This may be a further confirmation that more people paid cash, perhaps plowing their stock market gains into the economy; and that more subprime-rated potential customers are on buyers’ strike, either not wanting to or not able to buy at those prices.

136 comments for “Subprime Auto-Loan Delinquencies, Which Had Exploded, Plunged after Stimmies. These Folks Are Now on Buyers’ Strike”