“Some forced selling is highly likely.”

Mainland Chinese buyers, who largely drove the luxury real estate boom in Hong Kong, the world’s most expensive housing market in terms of affordability, have stopped buying. The number of homes eligible for buyer’s stamp duty, which is only paid by overseas or company buyers, mostly from the Mainland, plunged to an unprecedented low of just 42 homes in March, from a record monthly high of 534 in December 2017, according to the city’s Inland Revenue Department: 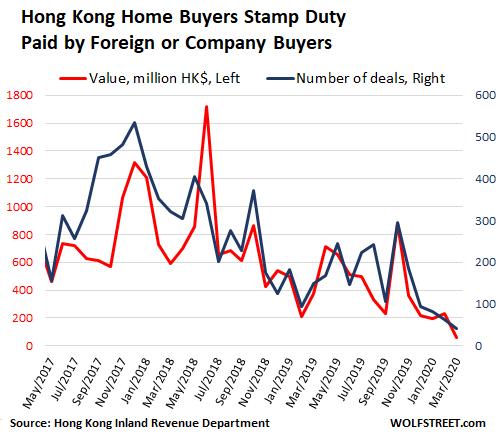 Sales of Hong Kong property to mainland investors have been trending downwards for the past two years or so, largely due to the Chinese government’s decision, in late 2017, to crack down on money laundering and illicit capital flows from mainland China to other countries. One of the main targets of that crackdown was money used to fund real estate projects in booming global cities with lax money laundering controls.

Since then, the combined toll of the US-China trade war, Hong Kong’s political crisis, and recently Covid-19 has decimated property investor sentiment.

In addition, many Mainland investors are desperately trying to sell those residential properties they have already bought as rental income in Hong Kong slumps and appetite for outbound investment all but vanishes in China. Many of these investors are willing to sell at a sharp discount to offload their property as quickly as possible.

Pummeled by weaker market sentiment, a lack of new launches due to the virus outbreak, and the evaporation of demand from mainland investors, luxury transaction volumes on Hong Kong island tumbled by 44% Q-o-Q in Q1/2020, following a modest rebound in Q4/2019, according to data published by Savills. In Kowloon and the New Territories, which were particularly popular districts among mainland investors, transaction volumes plunged by 50%.

“With Covid-19 coming at a time of trade tensions, some forced selling is highly likely,” said Simon Smith, senior director of research and consultancy at Savills Hong Kong. “Some mainland vendors whose businesses face cash flow issues, and landlords of properties with multiple mortgages, will be prepared to consider offers [at deep discounts] on a selective basis.”

Here are a couple of choice examples courtesy of South China Morning Post:

Weaker sales are translating into lower prices. Luxury home prices in Kowloon and the New Territories fell by 4.5% Q-o-Q in the first quarter. In areas such as Kowloon Station and Kowloon Tong the drop was even steeper, at 6.9% and 4.9%, respectively, from the previous quarter. Luxury apartment prices on Hong Kong Island declined by 3% in Q1/2020.

Prices have also fallen in the mass property market. According to Centalaline Property Agency’s Centa-City Index, which is based on all transaction records in the secondary market registered with the Land Registry, the median price fell 1.4% in March from February and about 9% from the double peaks in mid-2019 and mid-2018, and is back where it had first been in January and February 2018: 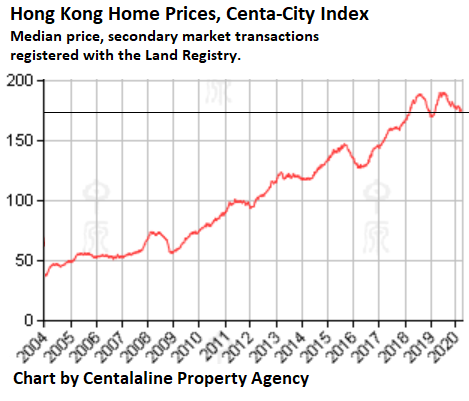 Prices will have to fall a heck of a lot further before most local residents with incomes that are even above the median can start dreaming about buying a home. Hong Kong is far and away the world’s most expensive housing market in terms of affordability for a median-income household, outdistancing even cities like Vancouver, Sydney and London, which have been through mind-boggling housing bubbles as well. By Nick Corbishley, for WOLF STREET.

Sales at luxury goods stores, once the largest category, collapsed by 86% since their peak in 2013-2014. Read... A Word About Hong Kong’s Retail Sales Collapse: It’s a Mess