Sales at luxury goods stores, once the largest category, collapsed by 86% since their peak in 2013-2014.

As Hong Kong tourist arrivals collapsed by 96% in February, with travel essentially banned since late January and borders to mainland China blocked, and with mainland visitors down 97.8%, retail sales at brick-and-mortar stores plunged 44% compared to February last year, the 13th month in row of year-over-year decline — and the sharpest yet — after having plunged 21% in January. But as you can see, this collapse in sales started long before COVID-19: 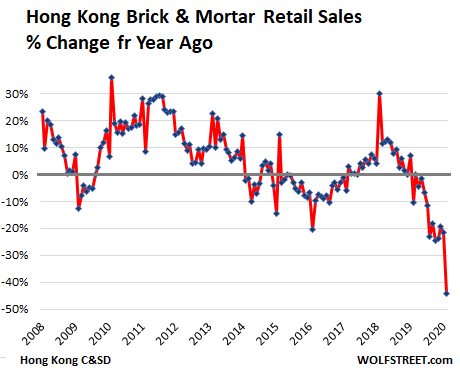 “The business environment of retail trade will remain extremely austere in the near term, as the COVID-19 pandemic has brought inbound tourism to a standstill and severely dented local consumption demand,” a government spokesman said.

Even before the arrival of Covid-19, Hong Kong had already clocked up two straight quarters of sharply shrinking GDP, mostly due to the political crisis that broke out last spring and escalated into a crescendo of violence in the summer. That crisis scared away many tourists from mainland China and elsewhere. Covid-19 did the rest.

The only types of stores that actually saw sales increases — in part powered by panic buying — in February were, according to the provisional data released by Hong Kong’s Census and Statistics Department:

All other categories saw declines, with some reaching deep into the collapse territory:

A special word about the collapsing sales at luxury goods stores.

Sales at stores for jewelry, watches, valuable gifts, and the like peaked in 2013 and 2014, as measured in HK dollars. At the time, these stores were by far the largest category. This is where tourists went to drop money. And even though sales started to decline in the following years, these stores remained the largest category by sales volume through 2018. But in 2019, sales suddenly collapsed further, driven by social unrest and the plunge in tourism.

From February 2014 to February 2020, sales have collapsed by 87%, from HK$9.5 billion to HK$1.5 billion, and now among the also-rans, below the category even of stores that sell “fish, poultry & livestock (fresh or frozen).” This was the lowest level of sales in the data going back to 2004: 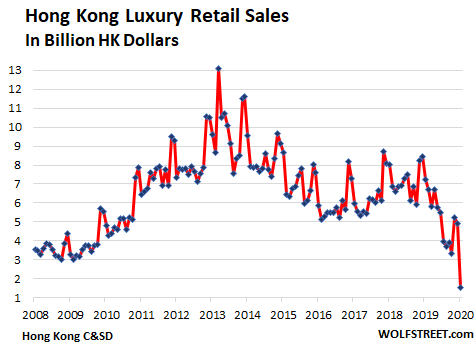 Will retail sales snap back? Hardly.

Hong Kong was fast to react when the first case was reported in January. It asked for social distancing, made virus mapping available, and put work-from-home measures in place, including for civil servants. But it never closed the restaurants. At first, the measures seemed to work. The pace of infections rapidly slowed, so much so that by March 2, those measures were relaxed, civil servants returned to the office, as did much of the private sector.

As soon as people began flocking back to work and buses and subways began to refill with commuters and bars and restaurants began teeming with thirsty, hungry punters, infections once again began rising, this time at a much quicker pace. Seeing this, the government not only reversed course on its easing of restrictions, it introduced newer, more stringent measures, including a ban on gatherings of more than four people, the blanket closure of cinemas, gyms and arcades and a mandatory ban on tourist arrivals to the city. This will further damage retail sales.

Retail landlords are trying to get through this.

Many Hong Kong-based retailers have already gone under or closed stores, and the vacancy rate in core shopping areas has surpassed 9%. And that is having ripple effects for brick-and-mortar property owners.

Hong Kong’s commercial real estate landlords were among the first in the world to begin offering rental relief to their tenants to help them weather the virus crisis — and in order for the landlords themselves to make it through the crisis. Henderson Land Development, the city’s third-largest developer which owns retail space in more than 20 shopping malls across the city, offered to slash rent by 60% last month. The company already took a 26% hit on its core profit last year. Those profits are likely to turn to losses this year.

“Hong Kong’s economic outlook is still hindered by unfavorable factors, including those stemming from the protracted local social unrest and spread of the novel coronavirus infection,” said the company in its annual results statement filed to the Hong Kong stock exchange late on Monday. “It is expected that the operating environment for the group’s various businesses will be challenging this year.”

With no end in sight to Hong Kong’s retail apocalypse or its Covid-19 containment measures, the broader economy expected to contract by a mind-watering 10% in the second quarter of this year, the word “challenging” is probably an understatement for a retail landlord. By Nick Corbishley, for WOLF STREET.

“We are temporarily a company with no product and no revenue.” Read... The $1.5 Trillion Global Tourism Industry Faces $450 Billion Collapse in Revenues, Based on Optimistic Assumptions

57 comments for “A Word About Hong Kong’s Retail Sales Collapse: It’s a Mess”