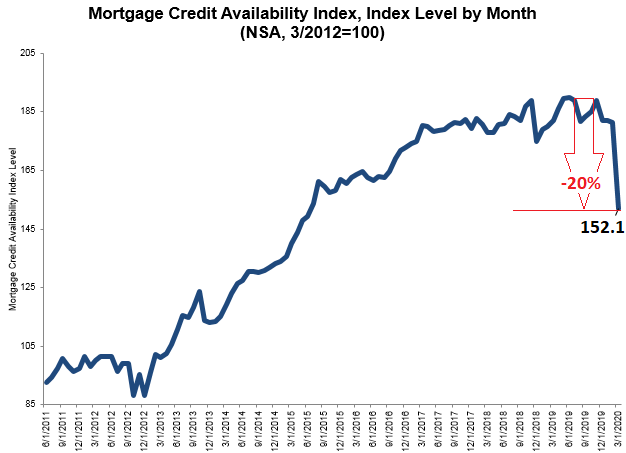 For a mortgage to be a QM, the lender has to follow requirements based on the borrower’s Ability-to-Repay (ATR), centered around income, expenses, assets, and debts. These rules came out of the subprime mortgage crisis. In turn, a QM provides the lender some legal protection; and they can more easily sell a QM to Fannie Mae, Freddie Mac, and government entities. But non-QMs are more difficult for lenders to offload, and so lenders are becoming more careful with them.

The “Jumbo MCAI,” which covers mortgages with balances that exceed the loan limits from $510,400 to $765,600 depending on the county, and that therefore cannot be sold to the Government Sponsored Enterprises Fannie Mae and Freddie Mac, and that lenders have to deal with on their own, plunged by 36.9% from February to March (all charts below via Mortgage Bankers Association; powered by Ellie Mae’s AllRegs Market Clarity): 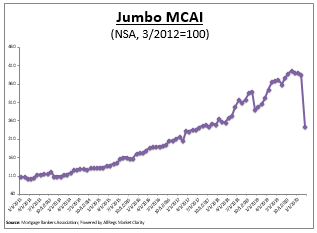 The “Conforming MCAI” covers mortgages that conform to the loan limits ($510,400 to $765,600 depending on the county) and that can therefore be sold to Fannie and Freddie. This index dipped by only 2.7% from February to March but has been declining for months: 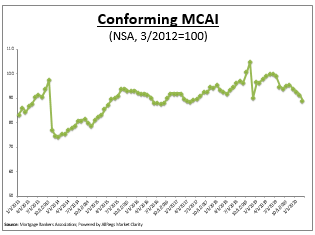 The “Government MCAI,” which tracks mortgages that are backed or insured by government agencies – the FHA, the VA, and the USDA – fell by 6.6% from February to March, the latest step in a process of tightening lending standards that began over two years ago: 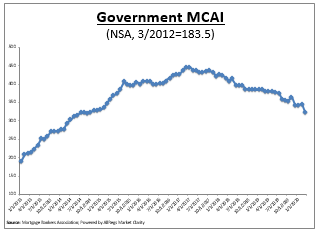 The plunging availability of jumbo loans is not a big problem in less expensive housing markets; but it’s a mega-problem in the most expensive markets, such as those on the West Coast and some parts of the East Coast.

It’s going to get much tougher to finance the purchase of a home in many parts of the San Francisco Bay Area, in some sub-markets of Southern California and in the Pacific North West, and in some large markets on the East Coast, such as New York, Boston, and the Washington DC area. Buyers of expensive homes, even if they accept higher interest rates, might have a hard time getting a mortgage. And sellers will have a hard time selling those homes at the price they envision.

But lending standards weren’t that loose to begin with

“To provide historical context” to the current status of lending standards, and how they have loosened in recent years, and then tightened since December, the MBA provides the “expanded historical series” of its MCAI, which covers the housing boom and housing bust that led to the mortgage crisis during the years 2004 through 2010. This stretch of the MCAI is based on six-month intervals (chart via Mortgage Bankers Association; powered by Ellie Mae’s AllRegs Market Clarity): 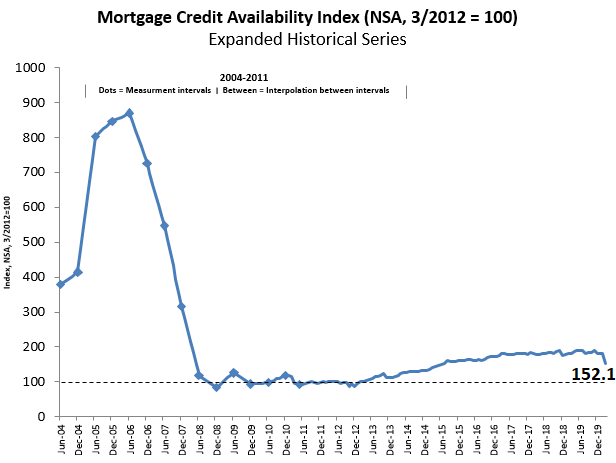 This historic perspective shows two things: Just how totally nuts things in the mortgage market were before it began to collapse in mid-2006; and that despite the loosening of lending standards since 2013, lending standards never returned to the craziness of 2005.

But mortgages rarely get in trouble when home prices rise because the borrower who cannot make the payments (due to job loss for example) can often sell the home and pay off the mortgage with the proceeds.

The trouble in mortgage land arises when home prices are falling, as they did during the housing bust. When home prices fall far enough, and a larger portion of mortgages are under water, just as people are losing their jobs and cannot make the payments, that’s when the pain for lenders and investors – and the government entities and quasi-government entities that back them – commences. And the biggest risk in the mortgage market today are the immensely inflated home prices in many markets that face a major reckoning.

“The mortgage market has more risk than previously acknowledged.” Read…  “Mortgage Forbearance” is Suddenly Hot, Hits Shadow Banks, which Clamor for Bailout from Taxpayers and the Fed

205 comments for “Going to be Tougher for Lots of People to Even Get a Mortgage. Expensive Housing Markets Most Affected”