All non-essential activities have been suspended for at least a month. But where are the bailouts?

Mexico faces its biggest economic storm since the Tequila Crisis in the mid-1990s. Then, the peso lost almost 50% of its value against the dollar in a matter of weeks, wiping out the life savings of much of the country’s middle class and stoking fears that collapsing asset values would push Mexican banks over the edge, taking part of Wall Street with them. In the end, that fate was averted with a bailout and the creation of one of the world’s first ever “bad banks.”

Today, as a whole different kind of crisis — this time a health crisis, global in nature — builds, the peso is once again sinking. In March, it suffered its biggest monthly decline since 2009, though it has since firmed a little. The economy of its biggest trading partner, the United States, has all but ground to a halt. This has major implications not only for Mexico’s exports but also for the remittances that Mexican workers living in the U.S. send back to their families. Last year, remittances from the US and other countries totaled $36 billion. 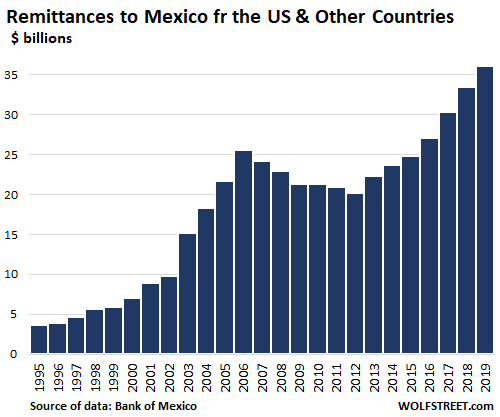 In some Mexican states, these payments can represent as much as 10% of total revenues, most of which gets spent very quickly in the Mexican economy. Thousands of businesses depend on the funds for capital. But as more and more of Mexico’s migrant workers fall prey to America’s jobs cull, a lot of that money is no longer going to arrive.

“Unemployment in the United States poses a big risk to the Mexican economy”, says José Luis de la Cruz, director of the Institute for Industrial Development and Economic Growth (IDIC). “The remittances have been a key pillar for the economies of many towns, cities and even entire states. Now we are expecting a fall of up to 20% in these funds this year.”

Mexico’s economy already stopped growing last year. Now, it’s beginning to seize up altogether following the government’s declaration on March 30 of a national emergency to tackle Covid-19. All non-essential activities have been suspended for at least a month.

The banks are once again beginning to fret. On Tuesday, Citibanamex sent a letter to clients warning that the economy is in an “state of agony” and in desperate need of “audacious” fiscal measures. Bank of America cautioned that Mexico’s president Andres Manuel Lopez Obrador’s “pro-cyclical measures” will not only deepen the coming depression, they will hasten the downgrading of Mexico’s sovereign debt to junk status.

In part, the banks are talking their own book, hoping to push AMLO into a bailout deal that will serve nobody’s interests but their own and their largest clients’. For the moment, it’s not working.

Most Latin American economies, including the region’s two powerhouses, Brazil and Mexico, have neither the fiscal firepower nor monetary leeway to intervene as aggressively in the economy as, say, the U.S. or most EU countries. To try to stop things from spiraling out of control, the Federal Reserve has announced it is opening swap lines with Mexico and Brazil’s central banks.

There’s also plenty more that AMLO could do to support the economy. Public investment under his administration remains extremely low. So far, his government’s fiscal proposals for combating the slowdown are, pound-for-pound, among the most timid in Latin America, representing just 2% of annual GDP, compared to 3-5% in many other countries in the region and 20-40% in some countries in Europe and North America.

Most of that money will go toward bolstering social welfare programs for the most vulnerable, including the elderly, single mothers and the unemployed. The government will also offer mini-loans of up to 25,000 pesos ($1,000) to a million micro-businesses with interest rates of 6.5%, the same as Bank of Mexico’s benchmark rate. But that won’t happen until the end of April. And as yet no money has been earmarked to help larger businesses ride out the storm. And that is causing major concern.

“Let me emphasize: this is a problem of liquidity, not solvency,” said Carlos Salazar Lomelín, president of the Business Coordination Council (CCE). “Companies both large and small were operating perfectly well in February, meeting all of their fiscal obligations. But suddenly, from one day to the next, they had to close up shop… [due to] a situation that was completely beyond their control.”

AMLO says he will not give tax breaks to people or firms. He will not incur public debt that will burden taxpayers for years to come. And he will not create another “FOBAPROA,” in reference to the deposit insurance fund the Zedillo government used to directly bail out many of Mexico’s biggest banks, and indirectly many of the corporations at the height of the Tequila Crisis. It was one of the world’s first (and worst) “bad banks.”

Lawrence Kudlow, who was then economics editor of the conservative National Review magazine, added some spice to the Tequila Crisis in sworn testimony to the US Congress: “It is a bailout of U.S. banks, brokerage firms, pension funds and insurance companies who own short-term Mexican debt, including roughly $16 billion of dollar-denominated tesobonos and about $2.5 billion of peso-denominated Treasury bills (cetes).”

And it cost the Mexican people, who ended up having to pay for it via newly issued debt, an incalculable sum of money and hardship.

Given all that has happened since Zedillo signed along the dotted line, AMLO for now refuses to kowtow to the banks and businesses’ latest request for another blank check to be paid for by the Mexican people. But this crisis is vastly different from the last one. Obviously, these businesses cannot be blamed for what is happening to them. And many need support during the lockdown. In the end, AMLO will probably end up helping them out. But it may be on his — not their — terms. By Nick Corbishley, for WOLF STREET.

Never before have so many property funds shut the doors on so many property investors. Read… Lockdown Hits UK Commercial Real Estate, Retail Landlords & Their Investors: Most Property Mutual Funds Suddenly “Gated”