The flight into US dollars! Dollar-denominated debts of Mexican companies weigh heavily.

As the coronavirus crisis roils the global economy, the strengthening dollar is causing all manner of stress and mayhem for national economies and their respective currencies. Nowhere is this clearer than in Mexico, whose currency, the peso, never really recovered from the last crisis and is now collapsing all over again. As of 4 p.m. Monday (Mexican time), it had tumbled over 3% to a record low of 25.42 pesos to the U.S. dollar.

Even by historic standards, the sell-off has been relentless. In the past 16 days, the peso has experienced 16 record daily lows. Not since the height of the last peso crisis, five years ago, has the currency notched up so many new lows in one single month. During that crisis, which lasted from late 2014 to late 2016, the peso lost roughly a third of its value against the greenback, none of which it was able to claw back. During this new crisis, which has so far spanned no more than a month, the peso has lost 26% of its value. The chart shows the value of 1 peso, which has plunged from $0.054 on Feb. 22 to $0.039 today: 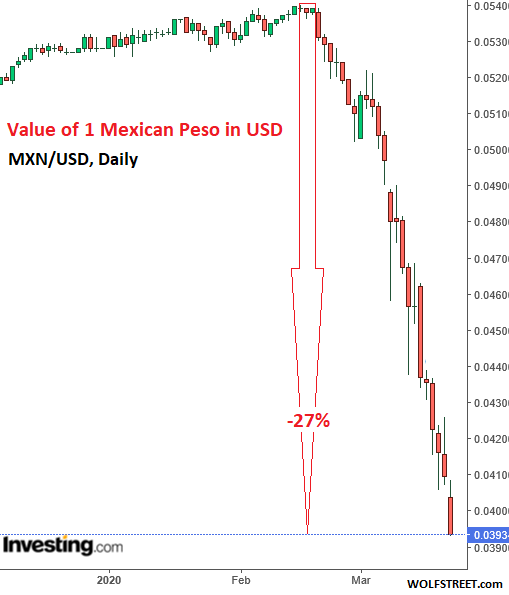 The Mexico peso is among a number of emerging market currencies that have become popular vehicles for carry trades, offering juicy interest-rate spreads against currencies with much lower interest rates such as the Japanese Yen or the euro. But when broad market sentiment toward emerging market risks turns, as is happening right now amid all the mayhem being triggered by the global response to the coronavirus, these currencies are particularly prone to capital outflows.

Mexico also has another big disadvantage in moments like these: It has one of the most liquid currencies and one of the biggest bond markets among emerging economies. It is also traded around the clock and has a high correlation with other Emerging Market. And it’s used in instruments designed to hedge against EM weakness. And that weakness is coming back to the fore right now.

If other peso crises are any indication, it’s not just foreign exchange traders after a quick buck that are betting against the currency. So, too, probably, are Mexico’s biggest banks and institutional investors. During the last peso crisis, an estimated 75% of transactions of pesos into dollars were being executed by big institutions and banks, mainly Mexican.

Neither the peso’s last collapse nor this latest one are a reflection of the current state of Mexico’s economy; they are the result, primarily, of economic and financial forces taking place far beyond Mexico’s borders. That said, each time the currency weakens, it heaps further pressure on the economy. And that economy is already in the doldrums.

Last year the country registered its first annual decline in GDP since 2009. The secondary sector, which includes manufacturing, mining and construction, contracted by 1.8%, its weakest performance in over five years. Particularly hard hit are construction companies, which are having to grapple with a sharp falloff in activity, and automakers which saw new vehicle sales in the domestic market slump 7.5%. The services sector, following years of uninterrupted robust growth, was flat in 2019.

On the consumer side, just as last time, a weak peso may fuel rising consumer prices, including of food and food staples such as tortilla and beans.

A significantly weaker peso will make it more difficult for Mexican corporations with large amounts of foreign-denominated debt on their books to service that debt.

Many of these companies took advantage of the sharp rise in central bank-engendered liquidity in the wake of the last Global Financial Crisis to borrow from the international markets, in foreign currency that their own countries cannot inflate away. This they did in much larger amounts and for much longer periods than at any other time in history. The ongoing slide of the peso against the dollar — the currency has lost 58% of its value since 2009 — has significantly increased the amount of leverage, in terms of dollar-denominated debt, at these companies.

Some of those companies, such as Cemex and Bimbo, earn a large amount of their revenues in dollars and as such should have little trouble servicing their U.S.-denominated debt. But for many others, the peso, not the dollar, is the staple currency of their revenues. Some, such as the big-box retailer Liverpool, earn no dollars at all and will now face a Herculean task trying to service their U.S.-denominated debt now that the peso is so much weaker.

The task will now fall to the Bank of Mexico to try to counter these global forces that are dragging the peso down to historic lows on a daily basis. After months of cutting interest rates, it may have to start raising them again. As it did in the last peso crisis, it will probably burn through a fair chunk of its foreign reserves buying up pesos, but again to little avail. Like the central banks of most emerging economies, Banxico’s resources are extremely limited and no match for the myriad forces that are pushing so much of the world’s money into the world’s reserve currency. By Nick Corbishley, for WOLF STREET.