Australia’s construction industry, which accounts for 13% of Australia’s GDP and one in ten jobs, is unsustainable and on the brink of collapse, according to Joe Barr, the CEO of John Holland, one of Australia’s biggest infrastructure firms and a wholly owned subsidiary of China Communications Construction Company (CCCC).

“I won’t sugar coat it,” he told The Australian Financial Review. “Tier one contractors in Australia are not making any money, and governments across Australia keep having successive project cost blowouts.”

The underlying message was not exactly subtle: Unless the government recognizes the pressures the industry is under and allows construction companies to renegotiate contracts that are either behind schedule or beset with cost overruns, companies could begin dropping like flies. Bailouts, while not explicitly mentioned in the interview, may also be on the docket.

It’s a message that has been conveyed by captains of all kinds of industry in all kinds of countries since Financial Crisis 2 began. As the economy freezes, companies suddenly see their revenues and earnings drop precipitously. Out of force of habit, they then ask the government to make up the difference.

In the case of Australia’s construction industry, it was already in trouble before the virus crisis hit. By the tail-end of last year, a multi-year boom had begun to turn to bust. And companies in the sector are now beginning to panic.

“We are in the midst of Australia’s biggest infrastructure boom, but as an industry, we are teetering on the brink of collapse,” Barr said. “While [the government has] projects worth hundreds of billions in planning along the east coast, it is unclear if there will be an industry left to build them.”

John Holland posted a A$60 million loss for 2019 after multiple margin write-downs on specific projects. Its biggest headache is the A$6.7 billion (US$3.9 billion) West Gate Tunnel project in Melbourne, which has been suspended for months following a dispute over who should pay the extra costs of dealing with huge volumes of contaminated soil at one stretch of the tunnel: the builders (John Holland and CIMIC, Australia’s largest construction company) or roadtoll company Transurban.

CIMIC and John Holland already terminated a contract to build the new tunnel in January, arguing they were not responsible for the unexpected cost and difficulty of disposing of the soil, which contains dangerously high levels of PFAS (per- and polyfluoroalkyl substances). Neither the government nor Transurban wants to stump up the cash either. The longer the dispute simmers, the more likely it is to scupper the project altogether.

That is the last thing that either John Holland or CIMIC needs right now. Both companies were in the red for 2019 — CIMIC to the tune of $1 billion. The loss came from the company’s decision to book a A$1.8 billion (US$1.2 billion) charge-off after failing to recover debts owed for projects built (or in some cases, barely built at all) at the tail end of Dubai’s property bubble. These project failures have cost the company billions in losses.

CIMIC’s stock has plunged by 60% since April 2019, wiping around A$9 billion in market value. Even before the arrival of Financial Crisis 2, the shares had plunged 40%. The initial trigger was a report that accused CIMIC of using reverse factoring agreements to create the illusion of cash flow, reduce the appearance of debt, and lower its leverage ratios — a charge the company has since admitted. Like other companies in the sector, CIMIC appears to have been making liberal use of supply chain finance techniques like reverse factoring to mask its cash flow issues.

And then the virus crisis began. While Australia, currently in early autumn, has not been as affected by the virus as many countries in the northern hemisphere, the number of Covid-19 cases down under is rising, recently surpassing 1,000. The virus has also hit Australia’s production and supply chains which are heavily dependent on Asia, in particular China, Australia’s largest trading partner. For CIMIC, the recent market turmoil could end up scuppering the sale of its massive mining services unit, Thiess, which was supposed to help stabilize its finances.

The market response was brutal. Last Thursday, CIMIC’s shares crashed by 31% to their lowest level since 2005. Then, on Friday, the shares bounced back 51%, but only after CIMIC’s majority shareholder, German construction giant Hochtief, signaled that it was buying 4.3 million new shares. That was enough to reassure investors, at least for one day. But concerns are rising, both at CIMIC and the industry at large.

Even before COVID-19 struck, disrupting the sector’s supply chains and halting activity on a few projects, Australia’s construction industry was already in the doldrums. In the fourth quarter of 2019, activity in the sector slumped by 7.4% year on year. The residential building segment bore the brunt of the downturn, with a 12.6% year-over-year drop in the fourth quarter. This was largely a result of the housing bust that swept through Australia’s core markets from late 2017 through mid-2019. The disruptions from last year’s bushfires then added to it: 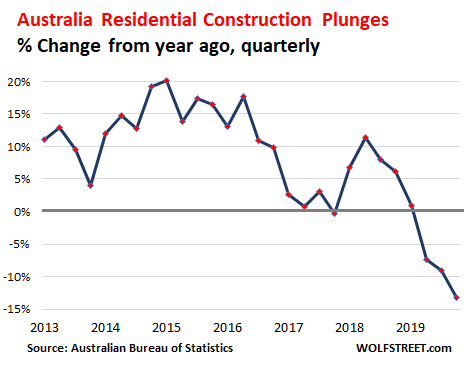 These sorts of projects are bread and butter for companies like CIMIC and John Holland. Now there’s less of them, industry representatives are clamoring for the government to lend a helping hand.

The government has already unveiled a A$6.7 billion stimulus package for small businesses while the Reserve Bank of Australia has made extra funds available to banks and non-bank lenders so that they can provide support to companies. It’s a welcome step in the right direction, says Rebecca Casson, CEO of industry group Master Builders Victoria, but not enough. Casson urged all levels of government to approve reasonable requests for time extensions even if the contracts do not technically allow them.

Industry groups are also calling on the government to launch a new public infrastructure maintenance program across Eastern Australia, to provide fresh work for companies in the sector. But fulfilling that work might be easier said than done given the growing problems companies are facing getting hold of basic raw materials, many of which are sourced from South East Asia, where countries such as Malaysia are already beginning to shut down their economies. By Nick Corbishley, for WOLF STREET.

The bushfires were just the latest problem: The slump started well before them and also affects states unaffected by them. Read… Epic Construction Downturn Grips Australia