Clues about when the disease may overwhelm hospitals are valuable. Without such forecasts, local exponential growth gives hospitals only a few days advance warning.

The CoronaWar continues – how soon will social distancing turn the tide? Extending the caseload analysis from my article from last Saturday, this report assesses progress in the Bay Area, the six hottest US state battlegrounds, and the six hottest global battlegrounds. We focus on locations with the highest number of confirmed cases per million population – in epidemiologists’ terms, the “prevalence rate.”

To focus on major population centers, I’ve ignored any country with under 1 million people, except for Iceland (pop. 341,000) which is special as you’ll see. Apologies to the Vatican and San Marino, both tiny nations embedded in Italy, which are technically the world leaders in confirmed cases per person. These hot spots are not covered here. Intriguingly, the states and countries with the most cases per capita are not necessarily the ones making the most news!

The graphs below use the same basic analysis as in the earlier article, but with the updated Johns Hopkins University (JHU) ArcGIS COVID dataset from 3/19, representing cases confirmed through 3/18. National population data was taken from Worldometers.info, and U.S. state data from the Census website. The graphs use a log scale on the Y-axis (similar to stock charts). This type of plot turns exponential curves into straight lines, which makes it easier to look at the early behavior and also spot “bending the curve” effects of social distancing and other public health measures.

Finally, beware: these are only “confirmed cases.” Nations which haven’t tested widely are under-represented (hello, Turkey and Indonesia). Even where testing is widespread, many cases are undiagnosed. The actual spread of the disease is likely much wider (possibly 10-100 times) than the confirmed cases.

The first CoronaWar graph is an update for the San Francisco Bay Area, with Italy and South Korea shown for contrast with other hot-spot outbreaks. Through March 16, the Bay Area was tracking the same exponential “Trend Growth” (black dashed line), with a doubling time of 3.2 days.  But since 3/14 the daily new cases have flatlined (48-59 per day) and so the growth has gone “sub-exponential.” That is, from 3/16 thru 3/19 the curve has begun bending slightly – from public health measures prior to the March 16 “shelter-in-place” order.

If shelter-in-place works like the Korean “Red Alert,” we should see stronger “bending of the curve” in about 5-8 days, maybe similar to the Korean data. The next few days will be very informative! Hopefully everyone keeps up the “social distancing” and shuts COVID down locally as fast as possible.

Italy is important because it provided the first empirical data on when hospitals get overwhelmed in an “alert” nation with active testing. Italy’s lockdowns came later than Korea’s, but the curve for Italy is falling away from the black Trend Growth exponential curve – the measures in Italy also appear to be showing some effect now.

However, hospitals in the Milan area were swamped with cases for the past 12 days, causing the death rate to surge. Mortuaries and crematoria have been overwhelmed (!), and the Italian Army has been called in to move coffins to less-impacted burial sites. Italian doctors have been forced into painful levels of wartime triage while scrambling to increase capacity. (Triage is a graceful euphemism for “saving the young and relatively healthy, and giving up on many of the old and infirm.”) Hopefully this is the worst of it for Italy and things begin to get better soon. 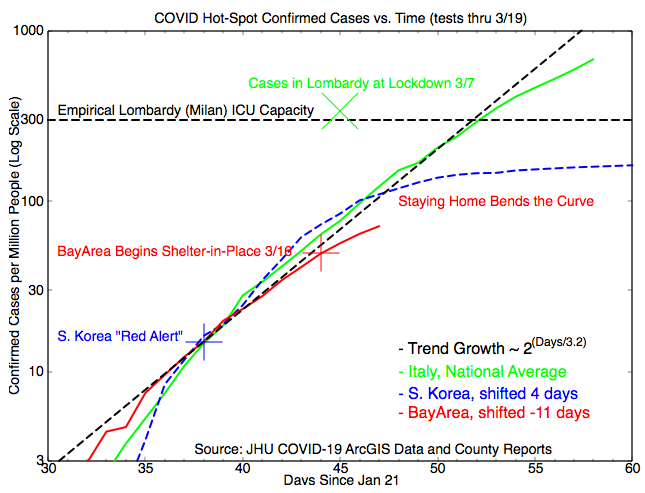 The top six US states.

Now let’s zoom out one level and look at the six US states with the most cases per person. For the US, the state-level data from JHU is only available from March 9, so the plot range is more limited. But the recent trends are most important in these battlegrounds. This graph is less hopeful than the Bay Area data. New York had a testing surge and has overtaken Washington State to become the most-impacted US state. The regional testing surge could also explain how nearby New Jersey has pulled into 4th place, but the others may be a surprise!

How did Louisiana get into 3rd? I’d love to hear from a local expert. Washington DC (5th) and Colorado (6th) are also surprises.

Massachusetts (not shown here) had been a contender, after reaping the bitter harvest of a super-spread incident involving, somewhat ironically, a biotech conference.

Colorado seems to be resurgent, after getting seeded by ski tourism, with a big cluster in Aspen. Washington DC is of course home to extremely social politicians, a group which globally has been at high risk. The Brazilian state visit appears to have had some impact on DC.

Meanwhile, California is missing (so far?), despite the Bay Area hot spot. The local hot spot is diluted by the large statewide population. And hopefully West Virginia, which just had its first case confirmed in the past couple of days, will stay off the list for good! 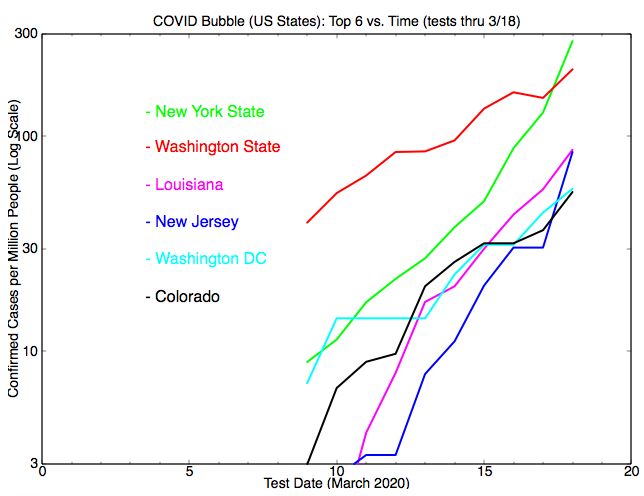 Surprise – Italy isn’t the leader, it’s actually Iceland! (Who infected Iceland??) Iceland is going to be a really valuable test case because the small population (341,000) and well-organized epidemiology team makes it possible to do truly representative testing. Early indications are that half the confirmed cases were asymptomatic at time of testing.  If they stay that way, it should support a lowering of the overall fatality rate estimates by WHO and CDC.

Italy, discussed above, is next on the list. Switzerland is in 3rd place, and Austria has risen to 6th. But Norway? Where did that come from?

Next is Spain, which reaped a bitter harvest from a major political rally in Madrid, but has downshifted since and is back to 5th.

Iran has been in the news a lot but did not quite make the cut here. They had been 2nd behind Italy, and were 6th a couple days ago, but have slipped to 7th due to Austria’s surge. The data for Iran is rolling over and I certainly hope they’ve truly managed to bend the curve, but given the apparent local chaos, it’s hard to tell from here. 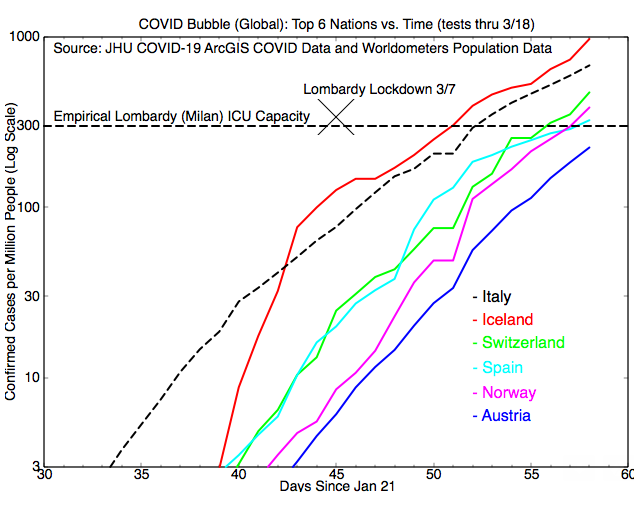 In each of these CoronaWar battlegrounds, we don’t know how many actual cases are out there. Any clues about when and where the disease may overwhelm hospitals are valuable. Without such forecasts, local exponential growth only gives hospitals a few days advance warning.

By watching other hot spots, and seeing where on the curve the local ICUs begin to overflow, we might be able to forecast farther ahead. I used Lombardy as an example, and have seen similar stories for Seattle (just hitting their ICU capacity limit now) and Iran.

We want to avoid hospital triage, but those horror stories do help to wake people up and get them to fight the battle. Fighting this war is as easy as “just stay home,” and yet that is so hard! It’s never too late to bend the curve by getting everyone you know to Stay Home and Stay Healthy! By Wisdom Seeker, for WOLF STREET.

230 comments for “Hottest Battlegrounds in the CoronaWar: Is “Social Distancing” Kicking In?”