What an ugly day in the stock market, just after analysts and the financial media proclaimed that the Fed had succeeded with its immense bailout shenanigans to “calm the markets.” It did manage to calm the markets for a day-and-a-half, from Thursday morning through Friday 11 a.m. But then it all came unglued. 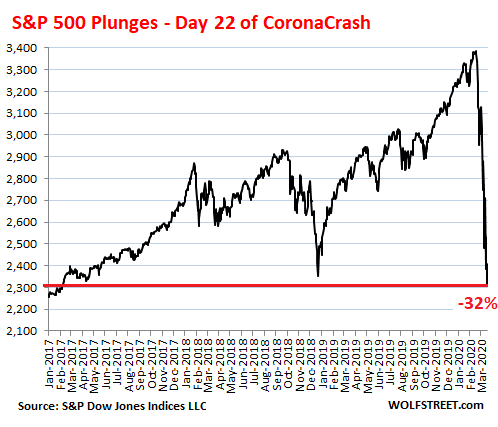 This move put the S&P 500 back where it had first been on February 9, 2017. Over three years of gains gone up in smoke in less than a month.

However, the crazy volatility of the past two weeks seems to have lessened, with the S&P 500 index now not having had a move over 4.3% in a whopping two entire full days (not counting intraday moves).

The prior eight trading days had all been moves, up and down, in the range of 4.9% to 12%, which amounted to historic volatility. So a drop of 4.3%, which would have been a major nerve-rattler until February 20, is practically routine now: 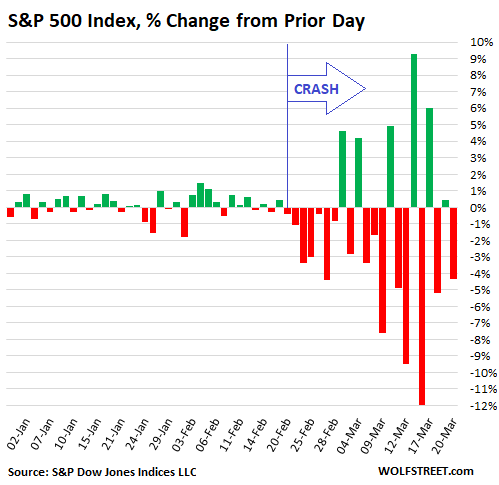 The rug is getting pulled out from under stocks by numerous factors. On top of the list is the simple fact that the historic stock market bubble and the most exuberant stock market euphoria in my lifetime, when stocks are the most precarious, collided with the coronavirus.

After this started to wreak havoc and stocks began to crash, two other huge factors came into play: One, share buybacks have mostly come to a halt as companies are now struggling for liquidity in an effort to survive this. And two, for the same reasons, dividends are getting cut brutally, all around.

The latest to announce suspending its dividend “until further notice” was Boeing. This came as a surprise to no one; the company is in an existential crisis. Boeing made the announcement on Friday evening to keep it as far away from stock trading as possible.

“Boeing is drawing on all of its resources to sustain operations, support its workforce and customers, and maintain supply chain continuity through the COVID-19 crisis and for the long term,” Boeing said, after it had blown, wasted, and incinerated $43 billion in cash since 2012 by buying back its own shares.

This is what Boeing’s shares [BA] have accomplished – and that was before the dividend cut could have any impact: They have plunged 78% from their peak on March 1, 2019, and 72% over the past five weeks, to the lowest level since February 2013.

By the looks of it, Boeing shares are willfully violating the dictum eternalized on our WOLF STREET beer mugs, “Nothing Goes to Heck in a Straight Line”: 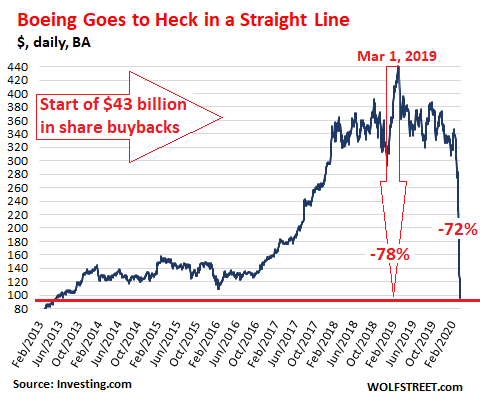 The top US-based airlines are also in an existential struggle, with many routes cancelled. For this period of the shutdown of the travel industry – if it lasts six more weeks or six months – revenues are going to collapse, while many expenses, such as aircraft leases and staff that haven’t been furloughed, continue.

Shares of the seven largest US airlines – Delta, Southwest, United, AA, Alaska, JetBlue, and Spirit – have plunged 61% in combined market value since February 12 this year, and are back where they’d been in May 2013, also violating with apparent impunity our WOLF STREET Beer Mug dictum that “Nothing Goes to Heck in a Straight Line” (data via YCharts): 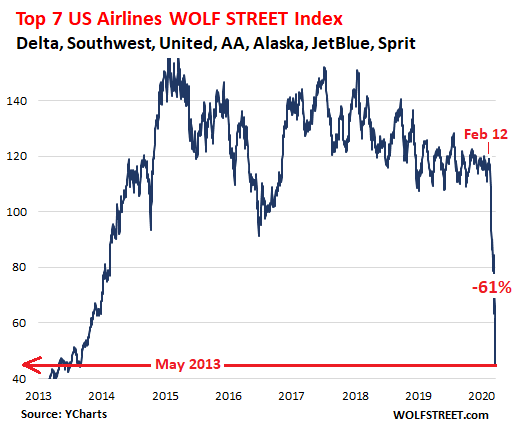 And like Boeing and much of the rest of Corporate America, Delta, United, American, and Southwest blew, wasted, and incinerated together $44 billion in cash on share buybacks since 2012 to manipulate up their share prices. Now, these share buyback queens, just like Boeing and many others, are asking for billions of dollars each, or tens of billions of dollars each, in taxpayer money to bail out their shareholders. Just say no. Chapter 11 bankruptcy restructuring that bails in shareholders and some creditors is the solution.

Here is Fed Chair Jerome Powell, upon seeing the market coming unglued again, after he’d already been credited with having succeeded in calming the markets, as envisioned by cartoonist Marco Ricolli, for WOLF STREET:

The bond market too is showing the biggest stress since the days of the Lehman bankruptcy, as yield spreads are blowing out in the $3.3-trillion category of BBB-rated bonds, which are just above junk bonds, and in the $1.3-trillion junk bond universe. Read… Junk-Bond Spreads & BBB-Bond Spreads Blow Out Past Lehman-Bankruptcy Levels

336 comments for “It’s Just Day 22 of CoronaCrash, and It’s Already Such a Mess”