The shares of CIMIC, Australia’s largest construction company, plunged 20% on Thursday to a four-year low, wiping AU$2.2 billion (US$1.5 billion) off its market value, following news that the company was abandoning its Middle Eastern operations with the sale of its stake in BIC Contracting (BICC). The firm expects to suffer a AU$1.8 billion ($1.23 billion) charge-off after failing to recover debts owed for projects built (or in some cases, barely built at all) at the tail end of Dubai’s property bubble.

CIMIC’s stock has plunged 44% since April, when the Hong Kong-based research group, GMT, had released a report that accused the company of using reverse factoring agreements with banks and financial institutions to create the illusion of cash flow, reduce the appearance of debt, and lower its leverage ratios: 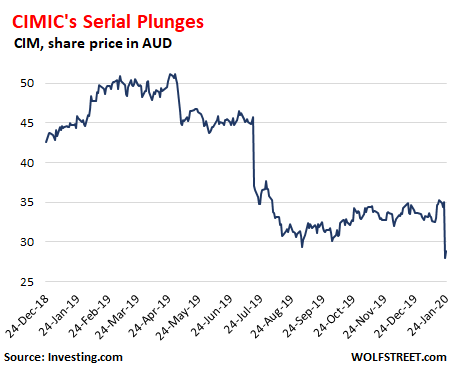 CIMIC (formerly known as Leighton Holdings before being acquired by Spain’s Grupo ACS) builds many of Australia’s biggest infrastructure projects, including Melbourne’s $6.7 billion West Gate Tunnel and Sydney’s Metro City. It is also the world’s largest contract miner. The company is majority owned by German construction giant Hochtief, which itself is majority owned by ACS, the world’s seventh largest construction and services company (by sales), following its acquisition of the German firm in 2011.

From 2005 through 2007, CIMIC’s shares soared from around AU$9 to a historic high of AU$58. This was the period leading up to most of the company’s investments in Dubai that would end up costing it billions of dollars in losses and write-downs.

CIMIC’s parent, ACS announced it will book a €400 million charge. For its part, CIMIC said it will cancel its final dividend for 2019, which is likely to further enrage shareholders, and it anticipates spending around AU$700 million ($470 million) in 2020 on financial guarantees of liabilities associated with BIC Contracting to facilitate the sale of its stake in it.

CIMIC’s disastrous Arabian adventure began in 2007 when it entered a joint venture with Dubai’s Al Habtoor Group, which came to be known as Al Habtoor Leighton. Like many other global businesses and investors, the Australian company had hoped to tap the United Arab Emirates’ booming construction market, but the timing could not have been worse: by 2009, the boom had turned to bust and Dubai had little choice but to ask its more conservative, richer neighbor, Abu Dhabi, for a $20 billion handout.

By that time CIMIC — then called Leighton — had shelled out AU$870 million for a 45% stake in the Al Habtoor’s building arm, Al Habtoor Engineering, which had some US$4.4 billion of total work in hand with predicted earnings of US$2.75 billion for 2007-2008. Those projects included luxury hotels such as Burj Al Arab and Kempinski Hotel & Residences Palm Jumeirah, a 73-story residential skyscraper called the Dubai Pearl and the St. Regis Saadiyat Island Resort, in Abu Dhabi.

When the Global Financial Crisis struck, property prices in Dubai and other parts of the Emirates plummeted and more than half of the projects in the country were cancelled, including many of the projects CIMIC had hoped — and paid over the odds — to participate in. The hugely ambitious Dubai Pearl development, for example, has stalled since 2009 and is barely off the ground. Even today, Dubai is blighted by a massive housing surplus and property prices have failed to come even close to recovering their absurdly inflated pre-crisis levels.

For CIMIC, the pain has merely grown over time. Between 2010 and 2012, the company was forced to take AU$2 billion in write downs. In 2012, its former chairman Stephen Johns told the Australian Financial Review (AFR) that he rued the day the company had ever entered the venture. “With hindsight, no, we’re not happy with [Al Habtoor Leighton], we should never have gone into it,” he said.

The partnership came to an acrimonious end in 2016, with Al Habtoor Group exiting the venture just weeks after the arrest by Dubai police of the CEO and managing director of Habtoor Leighton Group (HLG), José Antonio López-Monís, who was subsequently released without charge. CIMIC’s new Spanish owners continued to try and recover the money CIMIC had frittered away on its Arabian dream, but to no avail.

Today, it officially threw in the towel. One former employee said that ACS had tried to “kick the can down the road for as long as they could” but have ultimately been forced to accept that CIMIC will never recover its losses.

CIMIC — which has been dogged by opaque finances — insists it has enough money in its cash and loans to meet its obligations, but not everyone agrees.

In its report on April 30 2019, GMT Research alleged that CIMIC began minimizing the impact of its losses from the BICC joint venture in 2018, probably even as those losses grew significantly. This avoidance of JV losses, coupled with “aggressive revenue recognition and acquisition accounting,” had enabled the firm to inflate its profits by around 100% over the previous two years, according to GMT’s estimates.

In 2016, Morgan Stanley raised questions about the apparently irreconcilable figures the company was presenting for its operating cash flow. “Contrary to CIMIC’s comments at the first quarter that there was a a 28.5% improvement in operating cash flow, our assessment of Hochtief’s accounts implied that operating cash for Asia Pacific (which largely consists of CIMIC’s activities) actually deteriorated around 19% year on year,” said Morgan Stanley analyst Nicholas Robison. By Nick Corbishley, for WOLF STREET.

Brick & Mortar melts down on mall owners in the UK. So “repurpose” malls into housing? Read… What to Do with Malls? Teetering UK Mall Giant Intu Asks Investors for £1 Billion. Shares Drop to Near-Nothing