President AMLO put it this way: “There may be no growth but there’s development and well-being, which are different.”

For Mexico’s economy, 2019 was not a good year. The country entered a mild technical recession in the first half and by the end of the year had registered its first annual decline in GDP since 2009. According to a preliminary estimate published by Mexico’s statistical institute INEGI, “real” GDP (adjusted for inflation) for the year 2019 declined -0.1%: 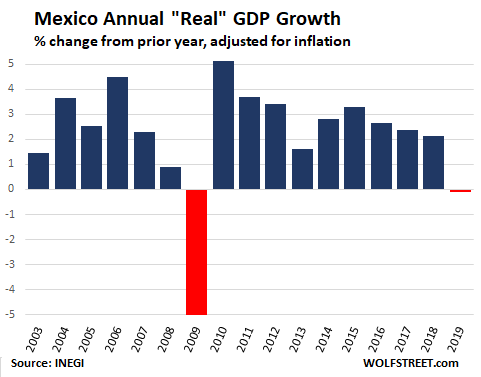 In the fourth quarter, “real” GDP declined 0.3% compared to the same quarter a year earlier, making it the third quarter in a row of year-over-year declines: 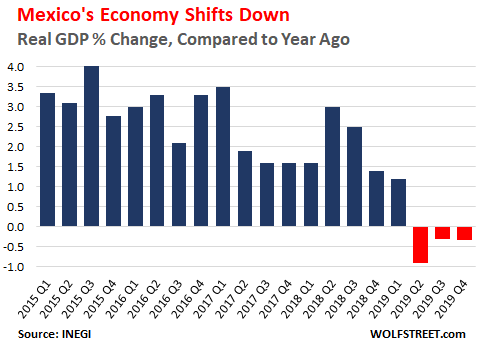 The biggest drop was in the secondary sector — manufacturing, mining and construction — which contracted by 1.8% in 2019, its weakest performance in over five years. Particularly hard hit were automakers which saw new vehicle sales in the domestic market slump 7.5%. The current global slowdown in auto demand also took its toll, with total auto exports falling by 3.4% to 3.3 million units in 2019, the first annual decline since 2009.

Manufacturing exports as a whole, which represent 90% of all Mexico’s exports, increased by 3.4% to reach $410 billion. This helped to cushion the blow of a 15% plunge in petroleum exports, to their lowest level in 40 years — the result of two main factors, according to analysts in the sector: the Mexican government’s decision to prioritize sending domestic crude to domestic refineries as opposed to exporting it; and reduced demand from Mexico’s biggest buyer of oil, the United States.

Despite all of this, total exports from Mexico still managed to grow by 2.3% while total imports fell by 5.1%, leaving the country with a trade surplus of $5.8 billion.

Mexico’s construction industry continues to struggle. In November, the last month on record, it notched up the 17th straight month of declining output. This is happening due to two main reasons:

Private investors are afraid to invest. Since the change of government in December 2018, there has been stronger enforcement of laws, rules and regulations concerning construction, which has made life more difficult for companies in the sector. Though largely well-intended, the inevitable result has been to make Mexico’s already painfully slow bureaucratic system even slower.

Public sector projects have ground to a virtual standstill. In the first half of 2019, Mexico’s new government invested just 20% of its projected budget for construction. This slowdown in public sector construction has been particularly pronounced in the capital, Mexico City, where almost 500 public and private development projects — over 40% of all the projects under way — were halted or cancelled by the new city council.

The defining moment came in November 2018, when the people voted in a referendum to scrap a one third-finished $13-billion airport project for the capital that was at least $4 billion over budget, mired in allegations of corruption, and posed a host of structural and environmental problems, delivering a massive blow to investor confidence.

The services sector — which accounts for 60% of Mexico’s GDP and includes health services, financial services, transportation, retail, education, and the like — did not fare so well. Following years of uninterrupted growth, it grew by just 0.1% in 2019, suggesting that the recent declines in manufacturing and construction have now spread to the all-important services sector.

It wasn’t all bad news, however. The primary sector – agriculture and livestock – which accounts for only a small part of the overall economy, grew by 1.9%, compared to 0.9% growth in 2018. That was good news for Mexican farmers and agricultural exports, and no mean feat given the prolonged uncertainty surrounding the USMCA trade agreement, which was ratified this week.

It’s not unusual for the first year of a new administration in Mexico to be beset by economic problems, as investors wait to see what kind of policies the new government adopts. Many move their money out of the country. It happened in 2000-01, 2006-07 and 2012-13. And it just happened again. The major difference this time is that Mexico’s president, Andrés Manuel López Obrador (AMLO) doesn’t seem to set quite as much store in official economic growth figures as his immediate predecessors, as he reminded investors today at his daily press conference:

“[These growth figures] were already expected, but the parameters for measuring the level of well-being in Mexico are changing. In our society and based on other data I have at my disposal, there is general well-being. There may be no growth but there’s development and well-being, which are different”.

It’s probably not the message investors want to hear. They will be hoping that the passage of the new trade agreement, coupled with AMLO’s new infrastructure plan, will reignite Mexico’s economy. If they don’t, the pressure on the Bank of Mexico to step in and cut its policy interest rate, which currently is at 7.25%, following three rate cuts last year, will only rise. By Nick Corbishley, for WOLF STREET.

GM shifted even more production to Mexico (as its US sales fell). But Ford’s imports from Mexico plunged. FCA’s, Audi’s, Nissan’s were down too. Read…  US Auto Imports from Mexico Hit Record, but Mexico’s Global Auto Exports Fall for First Time since 2009