Consumers that added $1.3 trillion to their savings last year are not the ones who owe $1 trillion on their credit cards.

This phrase, “consumers in aggregate,” is starting to crop up even in Fed speak, including in Jerome Powell’s press conference this week, to express that they’re not totally blind to what is happening. Consumers “in aggregate” – all of them thrown together into one bucket and summarized with one number – are still doing their job, propping up the US economy. 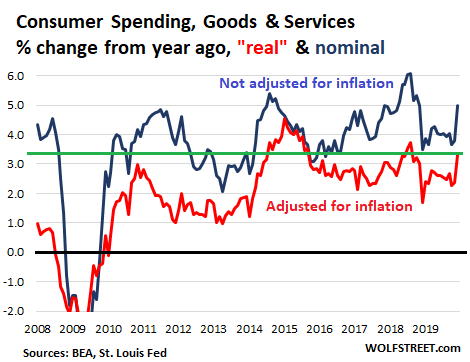 Consumer spending on goods rose 3.3% to $4.51 trillion, accounting for 31% of consumer spending. This includes data that we see elsewhere as retail sales.

And then there’s interest, which is not included in goods and services. Interest payments on mortgages, auto loans, credit cards, and student loans in 2019 rose by 7.4% to $362 billion. This surge in interest payment occurred due to larger mortgage debts and higher consumer loan balances, and despite the plunge in interest rates – except, well, um, on credit card loans and personal loans, where interest rates remain very high.

Total “personal outlays,” which include everything that consumers pay for, from goods and services and interest to sending money overseas ($92 billion in 2019,) rose 4.1% to $15.13 trillion.

So where did consumers get this money?

About half of personal income comes from wages and salaries. This is the amount all consumers combined were paid before taxes and other deductions. It’s a function of how many people are working and of what these jobs or side-gigs pay. In December, the total amount consumers received in wages and salaries grew by 5.2% year-over-year. For all of 2019, wages and salaries received grew by 4.9% to $9.32 trillion: 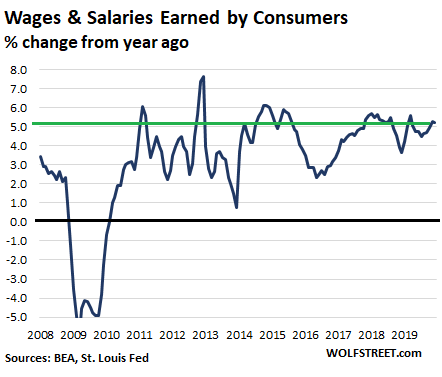 The table below shows the details for personal income by category for 2018 and 2019 and the percent change. Capital gains on investments – which have been hefty in 2019 – are not included. Proprietors’ income and rental income are net of “capital consumption,” which includes depreciation.

All forms of income combined minus taxes and minus contributions to “government social insurance” (such as Social Security) result in disposable income, the line at the bottom of the table, which grew by 4.4% in 2019 to $16.4 trillion: 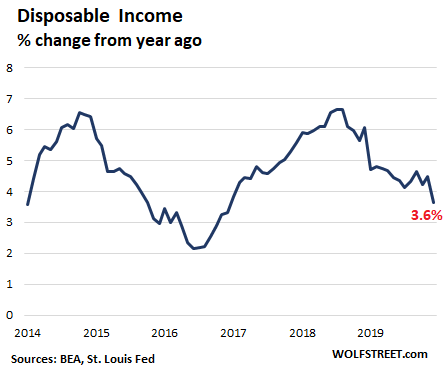 The moolah per capita

How much did folks save?

Consumers are in pretty good shape, “in aggregate…”

Consumers “in aggregate,” however, are heavily skewed by a small group of very wealthy, very high-income consumers. This statistical skew is caused by the extraordinary income-and-wealth disparity in the current economy, where central bankers have done everything possible to increase this income-and-wealth disparity through the “wealth effect,” as they called it – making wealthy asset holders even wealthier by inflating all asset prices, so that they might spend a little more. This likely helped GDP a little, and it certainly did a wonderful job of boosting incomes at the top:

And this is where these “in aggregate” numbers get in trouble.

For example, American consumers saved $1.3 trillion in 2019 “in aggregate” according to the above data. But survey after survey shows that about half of American households have essentially no savings, and are living from paycheck to paycheck, many of them with big balances on their credit cards. Credit card debt now exceeds $1 trillion.

But those consumers who owe $1 trillion on their credit cards are not the ones that saved $1.3 trillion last year. That’s another group of consumers. And it’s not the top group of consumers that is likely to get in trouble, it’s the bottom 50% or 60% or even 70%. That’s where there are little or no savings, and where people are engaged in a mad dash every month to make ends meet. But “in aggregate,” it looks pretty good.

Dream of 3% economic growth remained a dream despite surge in government borrowing and spending. Read... US GDP Rose by $850 Billion in 2019 as US National Debt Surged by $1.2 Trillion. Debt-to-GDP Ratio Hit 108%