GM shifts even more production to Mexico (even as its US sales fall). But Ford’s imports from Mexico plunge. FCA’s, Audi’s, Nissan’s down too.

Hit by the global swoon in auto sales, Mexico’s exports of cars and trucks to the rest of the world fell by 3.4%, to 3.3 million units in 2019, the first annual decline since 2009. Exports to Europe plunged.

The U.S. imports eight out of 10 cars and trucks that are assembled in Mexico. Over the first nine months of 2019, auto imports from Mexico grew at 8% year-over-year. But in Q4, imports suddenly plunged 11%, according to data from the Mexican automotive industry association AMIA (released by the National Institute of Statistics and Geography INEGI). In December alone, auto imports tumbled 16.7%. The year-end swoon slashed year-total growth of imports from Mexico to just 2.9%, the smallest increase in over a decade. In 2019, the US imported 2.64 million vehicles from Mexico: 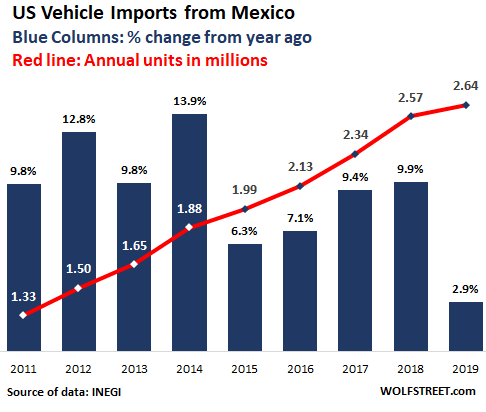 Mexico’s auto industry is worried. Over the past decade-and-a-half, it has enjoyed the benefits of non-stop growth, largely based on exports to the US. Between 2011 and 2018 the total number of vehicles sent to the U.S. from Mexican assembly plants surged by 93%, rising every single year, sometimes by double-digit percentages, including 13.9% in 2014. Even in 2015, the worst year until this year, the total imports still grew by 6.3%.

These increases happened even as the U.S. car market has been declining for the past three yeas. But now the impact is being felt south of the border.

Of the 12 global automakers with plants in Mexico, seven reduced their shipments to the U.S. in 2019. For Q4, the data is even grimmer with 10 out of the 12 automakers reducing their shipments from Mexico to the US. The companies that cut back the most were:

There were three big exceptions:

For most automakers in Mexico, 2019 was a tough year. New vehicle sales in the domestic market slumped 7.5%, the worst contraction since the Global Financial Crisis.

Mexico’s auto industry is also tangled up in the current global slowdown in auto demand, with total auto exports falling by 3.4% to 3.3 million units in 2019, the first annual decline since 2009.

“It’s not a matter of the plants’ capacity, it’s about how much of this production the market is absorbing,” departing AMIA president Eduardo Solis told a news conference. “We’re seeing major falls at a global level.”

But not all automakers in the US had falling sales. Here are the top automakers in charts. Read… US New Car & Truck Sales in 2019 Fell Below Year 2000 Level, 3rd Year in a Row Below 2016 Peak

31 comments for “US Auto Imports from Mexico Hit Record, but Mexico’s Global Auto Exports Fall for First Time since 2009”