This solid recession indicator is starting to concern me again.

Commercial and industrial loans (C&I loans) at all commercial banks fell to $2.33 trillion as of January 1, the lowest since March 2019, according to Federal Reserve data on commercial banks, released on Friday. C&I loans peaked in August last year at $2.38 trillion and have since fallen 1.7%. This has occurred despite three rate cuts by the Fed over the period.

These loans are often credit lines with floating interest rates – which are very low and very appealing for borrowers. And banks are eager to extend these loans and are offering them aggressively, even to my little company. So there is no issue at this side of the equation.

But demand from businesses for these loans is a sign of economic activity, a sign that businesses are expanding or curtailing their activities. And demand is sinking.

The chart shows the year-over-year percentage change of these loan balances. Note the relationship between the year-over-year declines (below the red line) and recessions. If loan demand suddenly bounces back over the next two or three months, I’d say the US economy has cleared this particular hurdle. But if the trend since August continues to go south and ends up in the -3% or worse neighborhood, a different scenario would emerge: 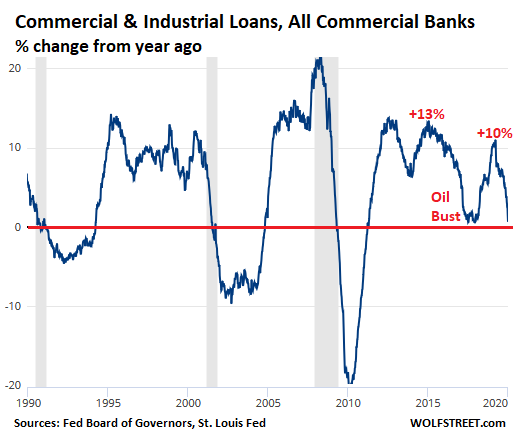 The drop in 2015-2016 was associated with the Oil Bust and the industries related to oil and gas extraction, including manufacturing, trucking, and specialized segments of the tech and services sector. The balance of C&I loans dropped by $30 billion from the peak in November 2016 through March 2017, before beginning to rise again. But the growth rate never turned negative on a year-over-year basis, and a recession was averted. In 2016, GDP growth was only 1.6%, the slowest since the Financial Crisis.

Now we’re back in the same scenario, only worse: So far, loan balances have dropped by $42 billion in four months, from the peak in August 2019 through January 1, 2020.

The rekindled left-over oil bust has something to do with it, though the price of oil remains over twice as high as during the low point in 2016, and the oil bust today is not nearly as ferocious as it was back then.

Today, there are additional elements triggering the lack of demand for C&I loans, such as the broader slowdown in manufacturing and in the freight sector (outside of last-mile delivery for ecommerce). C&I loans are a broader measure of the economy, not limited to manufacturing. Many services businesses have C&I loans to fund equipment purchases or for working capital, collateralized by receivables.

C&I loans, in a growing economy, are growing at a good clip because they’re directly tied to business activity, for a broad range of businesses. And in the past, when loan demand declined significantly, a recession loomed. As for now, C&I loan balances have dropped 1.7% from the peak in August and are still up from a year ago, but barely, 0.6%. And if loan demand doesn’t bounce back soon and continues to head lower, it will be time to revive recession talk: 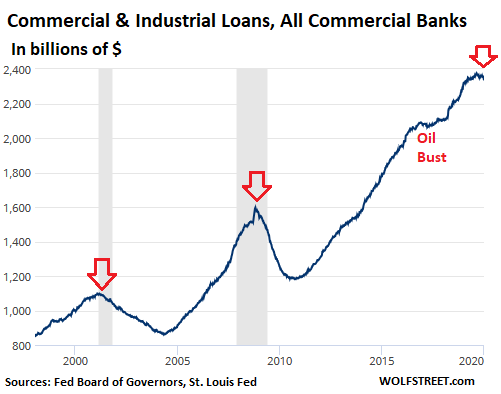 And more rate cuts won’t help in this respect. Interest rates are already low, and it’s not the cost of debt that keeps businesses from taking out C&I loans. It’s the lack of business on their part. C&I loan balances were surging in 2018 and 2019, even as interest rates were rising. But balances began to decline only weeks after the first rate cut at the end of July. This is a close-up of C&I loan balances over the past two years: 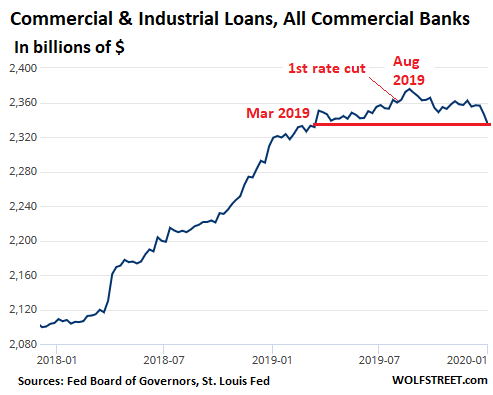 However, what happened during the Financial Crisis was special, in terms of my lifetime: Credit froze up; banks, some of which were collapsing, stopped lending; businesses stopped asking for loans; and C&I loans plunged off a cliff. This is not the scenario on the horizon at the moment.

The typical scenario would be something like in the prior two recessions where the business cycle does its thing, where a wave of business debt restructurings and bankruptcies reduce outstanding debts at the expense of investors and banks, and where businesses are hunkering down, and loan balances shrink because of declining demand, tightening credit standards, and debt restructurings.

The US economy is not there yet. C&I loans haven’t reached that stage yet, and might bounce back over the next few weeks or months. But if they continue to head south, the recession scenario is a big step closer.

Amid a shakeout among trucking companies and production cuts and layoffs among truck makers, orders for heavy trucks, which collapsed last year from the boom, refuse to bounce back. Read... Truckers Take “Wait and See Approach”: Equipment Orders, After Having Plunged, Stall at Low Levels