It has been a sea change in no time. Banks and nonbanks – the “shadow banks” – are reducing mortgage lending and tightening up lending standards. Nonbanks, which include the largest mortgage lenders, are asking for a bailout because, as mortgage servicers, they’re facing a liquidity crisis. Home sellers are pulling their properties off the market because there are no buyers. The brokerage industry and the businesses that support it are reeling. In expensive housing markets, jumbo loans dominate, and they’re not backed by government guarantees and bailout programs. And the weekly data on mortgage applications shows where this is going. 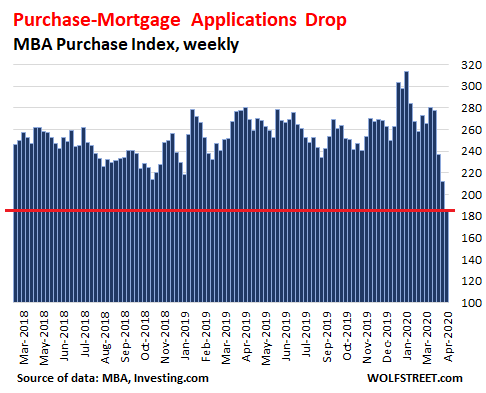 The weekly data on mortgage applications to purchase a home is now in the third week of going from bad to worse, under the effects of the lockdowns, the sudden explosion of the unemployment crisis, and the equally sudden tightening of lending standards.

In three states where lockdowns started first, which are also among the most expensive housing markets, the year-over-year plunges in purchase-mortgage applications were the most severe:

This plunge in purchase mortgage applications is occurring even as mortgage rates remain near historic lows, with the average interest rate for 30-year fixed-rate mortgages with conforming loan balances at 3.49%. 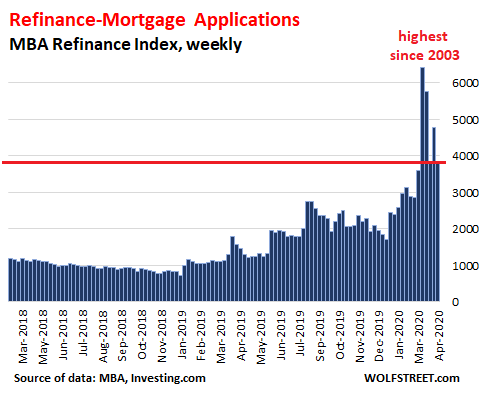 The MBA obtains this data via weekly surveys of banks, nonbanks, and thrifts that cover 75% of all US retail residential mortgage applications. Mortgage applications are an early indication of demand by potential home buyers. But they’re not an indication of demand by nonresident foreign investors and larger domestic investors that fund their purchases at the institutional level.

There are now numerous reports from all types of mortgage lenders, banks and nonbanks, how they’re tightening up mortgage lending standards and how they’re stepping away from certain types of riskier mortgages altogether.

Wells Fargo is one example. It and JP Morgan are the top mortgage lenders among banks, though nonbank Quicken Loans is now the largest overall mortgage lender. Well Fargo said in an internal memo obtained by Reuters and confirmed by a spokesperson that it will stay away from many types of mortgage loans including:

Wells Fargo said that applications for those types of loans were automatically turned down as of Friday.

These “non-conforming” loans are riskier for banks because they’re not backed by government entities such as the VA or Ginnie Mae, or Government Sponsored Enterprises Fannie Mae and Freddie Mac. The bank ends up with the credit risk.

And the new forbearance agreements that Fannie and Freddie and the government agencies are backing don’t apply to jumbo loans since those entities don’t guarantee those loans. And so the mandated payment holidays are now becoming an issue for banks.

As lenders are getting more skittish about jumbo loans and less willing to underwrite them, they’re requiring larger down-payments and other criteria to reduce the risks of those loans for the lenders. This will make it even harder for sellers of high-priced homes to sell their homes. In some markets, this would impact only a small number of sellers. But in expensive markets, the majority or even most of the homes fall into this category. And those markets are going to be even tougher.

When the unemployment crisis exploded onto the scene three weeks ago, sales totally collapsed. What’s in store for the industry? Read…  How Lockdowns Hit U.S. New & Used Vehicle Sales: Beyond Ugly