Gut-wrenching. The hope is that most people will be rehired as the health crisis becomes more manageable and lockdowns are loosened.

More – and previously unimaginable – gut-wrenching data about the lockdown-economy: 6.606 million people filed initial unemployment claims in the week ended April 4, seasonally adjusted, about ten times the prior peaks during the prior crises in 1982 and 2009, according to the US Department of Labor this morning. This is in addition to the 6.87 million claims a week ago (upwardly revised by 219,000 claims) and 3.3 million claims two weeks ago. Combined, this makes for nearly 16.78 million unemployment claims processed in three weeks.

State unemployment offices have ramped up staffing in their claims processing departments to catch up with the tsunami of claims, and they have beefed up their websites that have crashed periodically under the onslaught, and they’re still behind processing the claims. What we’re seeing today is the only portion that they were able to process. 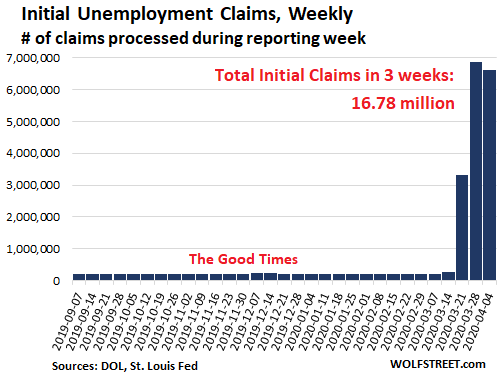 This chart, going back over four decades, puts the suddenness and magnitude of the current collapse of the job market into long-term perspective: 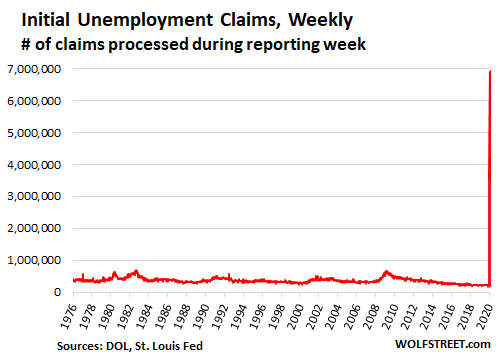 The 11 states with the most initial claims this week.

The table below shows the 11 states that had the most initial claims for unemployment insurance in the week ended April 4. I extended the list to 11 because I wanted to get Florida into it because in its comments (listed further below) it joined Texas as the only two states that mentioned “agriculture” among the industries with large unemployment claims:

Some of the states provided comments about the industries that the layoffs were concentrated in. Here are the comments from the states with the largest number of unemployment claims. Note the breadth of those industries:

The above numbers are the “initial claims” of Unemployment Insurance (UI). A week after they filed, and if the people are still unemployed, they are added to “insured unemployment.”

As more people will file for unemployment in the coming weeks, and as the unemployment offices catch up with the surge, these gut-wrenching numbers are going to balloon further.

The hope is that most of these people will be rehired by their old employers as the health crisis becomes more manageable and as lockdowns are gradually loosened. That’s the hope, and we’ll cling to it.

When the unemployment crisis exploded onto the scene three weeks ago, sales totally collapsed. What’s in store for the industry? Read... How Lockdowns Hit U.S. New & Used Vehicle Sales: Beyond Ugly